Technically this is not a camera review, or even a camera accessory review. The product I’m reviewing this time is the Nanoblock X Nikon F kit, a plastic block model of the iconic Nikon F SLR camera.
If you have never heard of Nanoblock before, basically it is tiny plastic building block. Some people call it micro size Lego kit.  They are made by the Japanese company called Kawada and gaining quite a lot of popularity in the last few years.
As someone really likes the Nikon F,  I was so excited when I heard about this Nanoblock X Nikon F kit and knew I have to get one for myself. 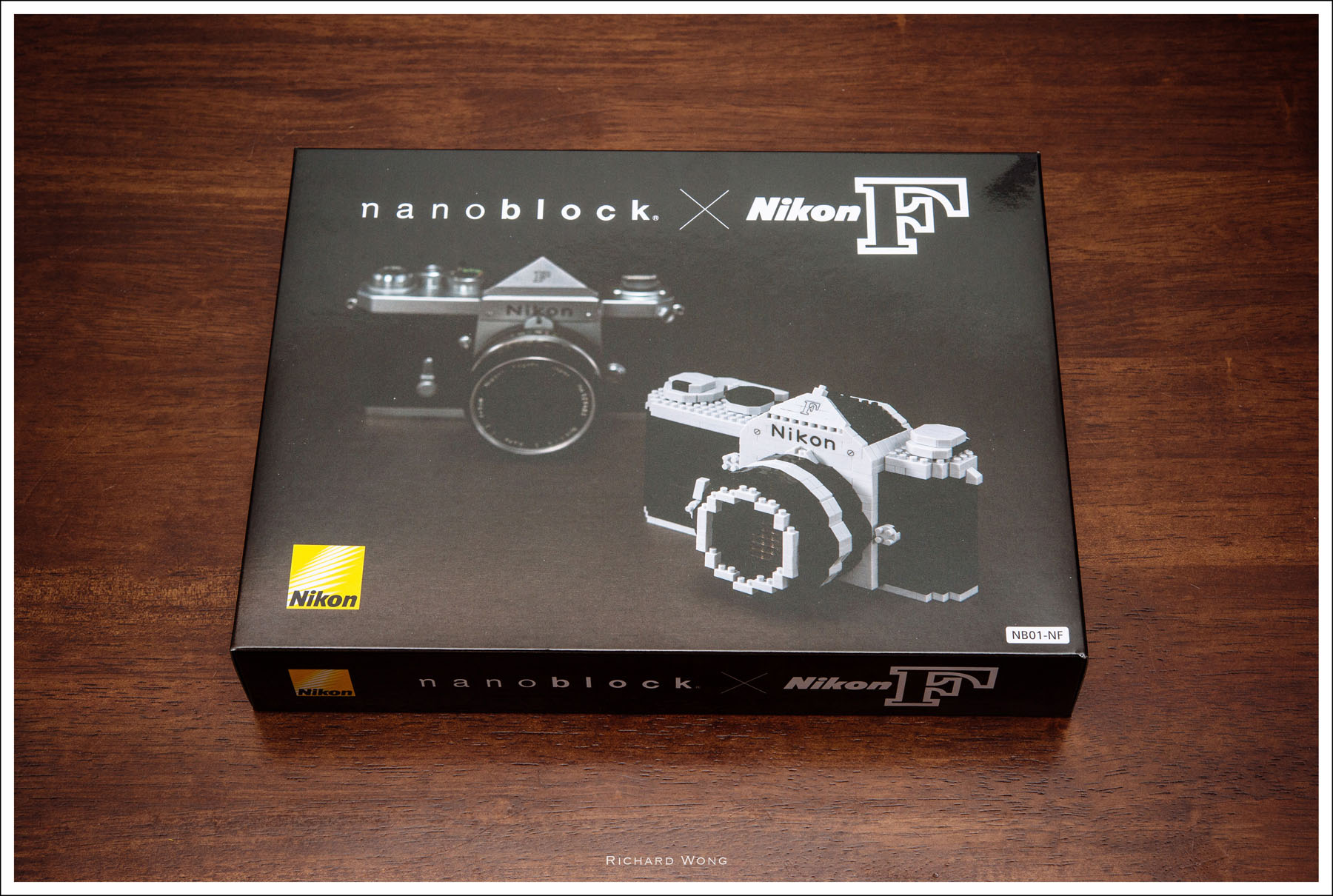 The Nanoblock X Nikon F is a collaboration between Nikon and Kawada and it is a completely non functional camera model kit. As far as I know, the Nanoblock X Nikon F kit is only available from the Japanese Nikon direct website or the Nikon museum in Tokyo. Unfortunately both options are not good for someone like me who doesn’t live in Japan so I can only keep thinking about it. But a little while ago, I found a Japanese ebay sellers selling the kit at reasonable price so I ordered one immediately!
This is my first Nanoblock kit so I’m not entirely sure what to expect and how good is it compare to the building blocks gold standard, Lego kit. 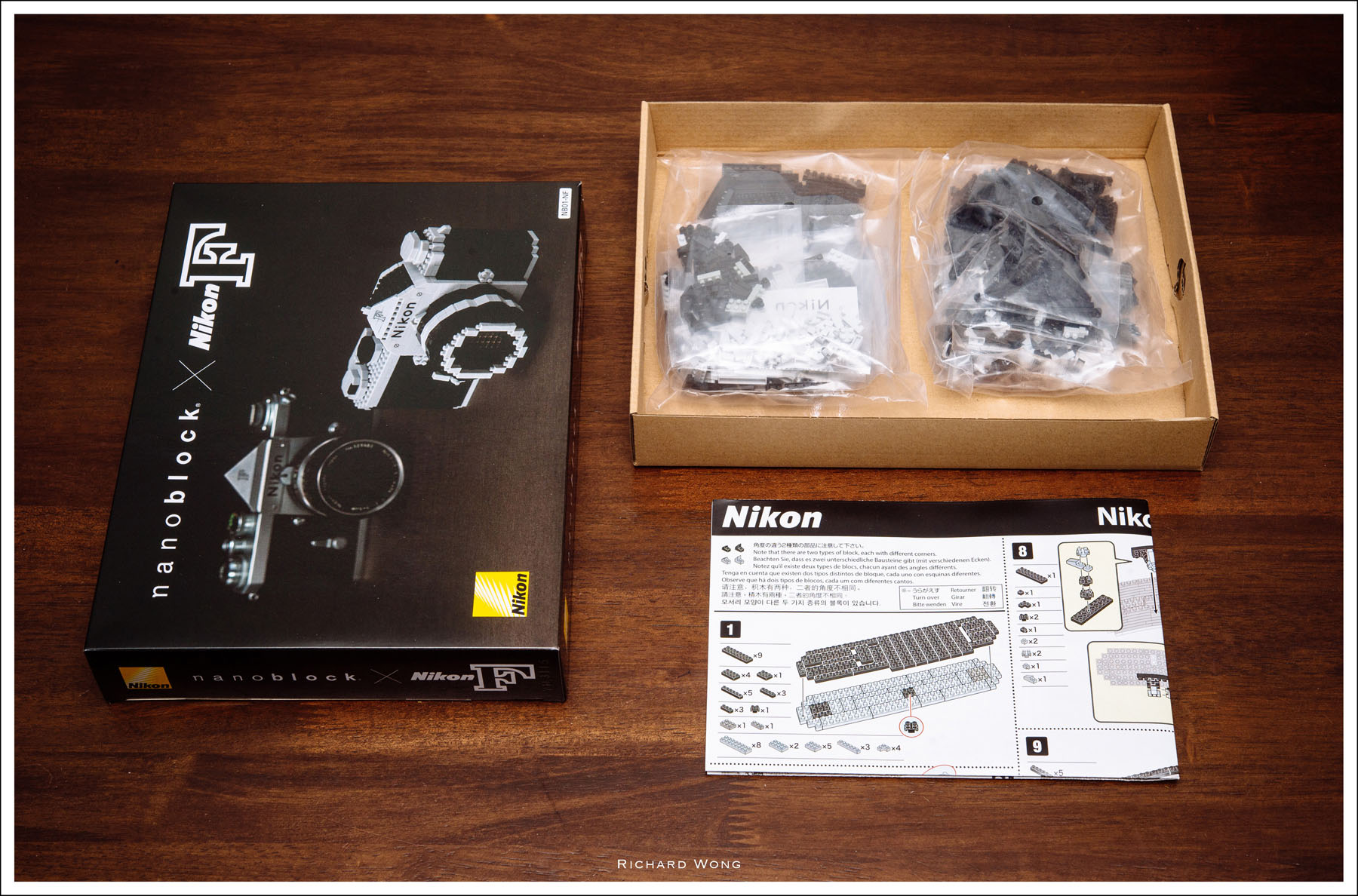 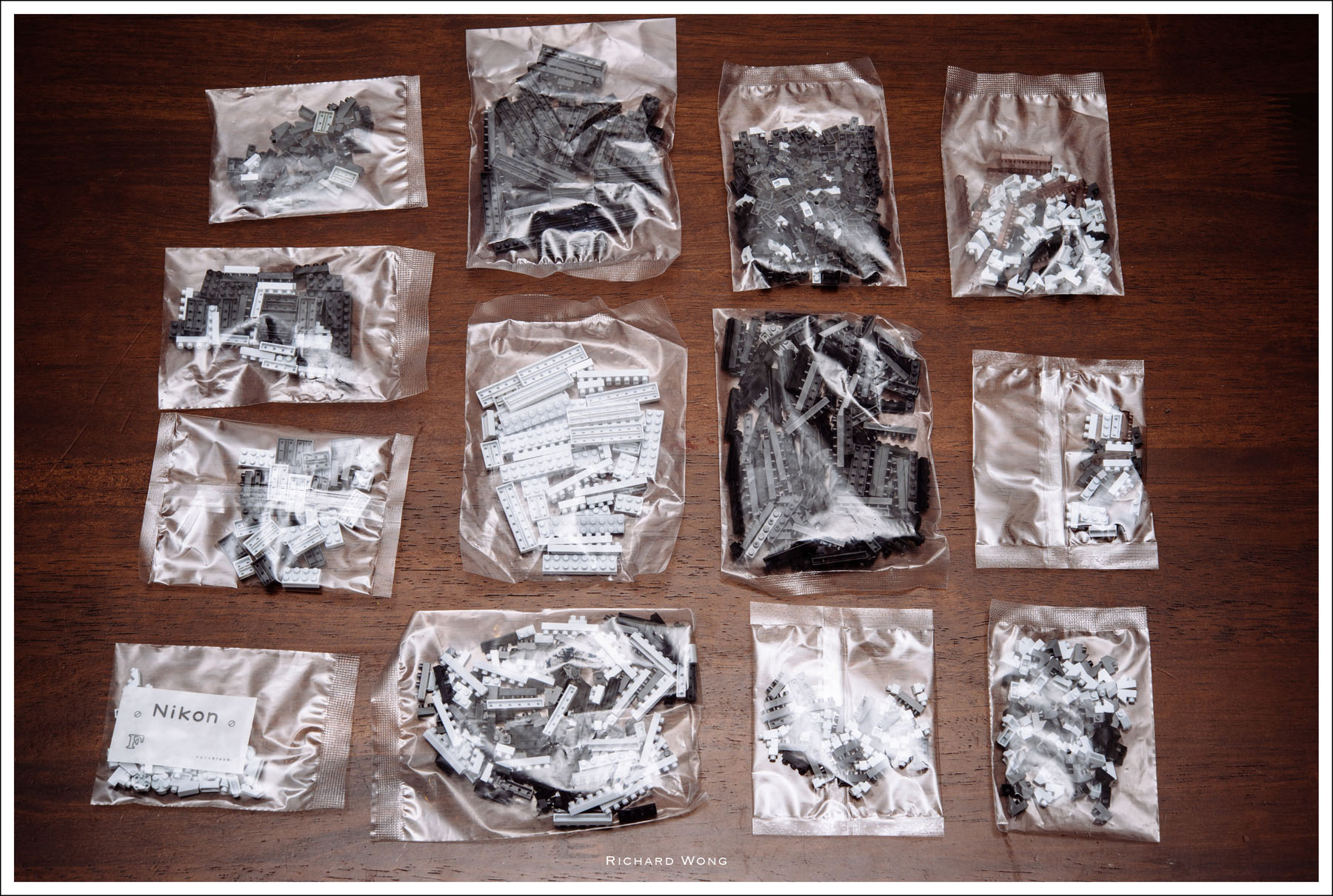 It may not look like it, but there are about 1000 pieces

The Nikon F is not the first Nanoblock camera kit but with approximately 1000 pieces, it is definitely the most complicated and detailed Nanoblock camera kit. Inside the box, there are about a dozen of plastic bags, inside each bag you’ll find plastic blocks of  similar size/shape. I would prefer if they group them according to the building steps instead so I only have to open one bag at a time instead of having to open all of them and have 1000 tiny blocks on my desk right at the beginning. 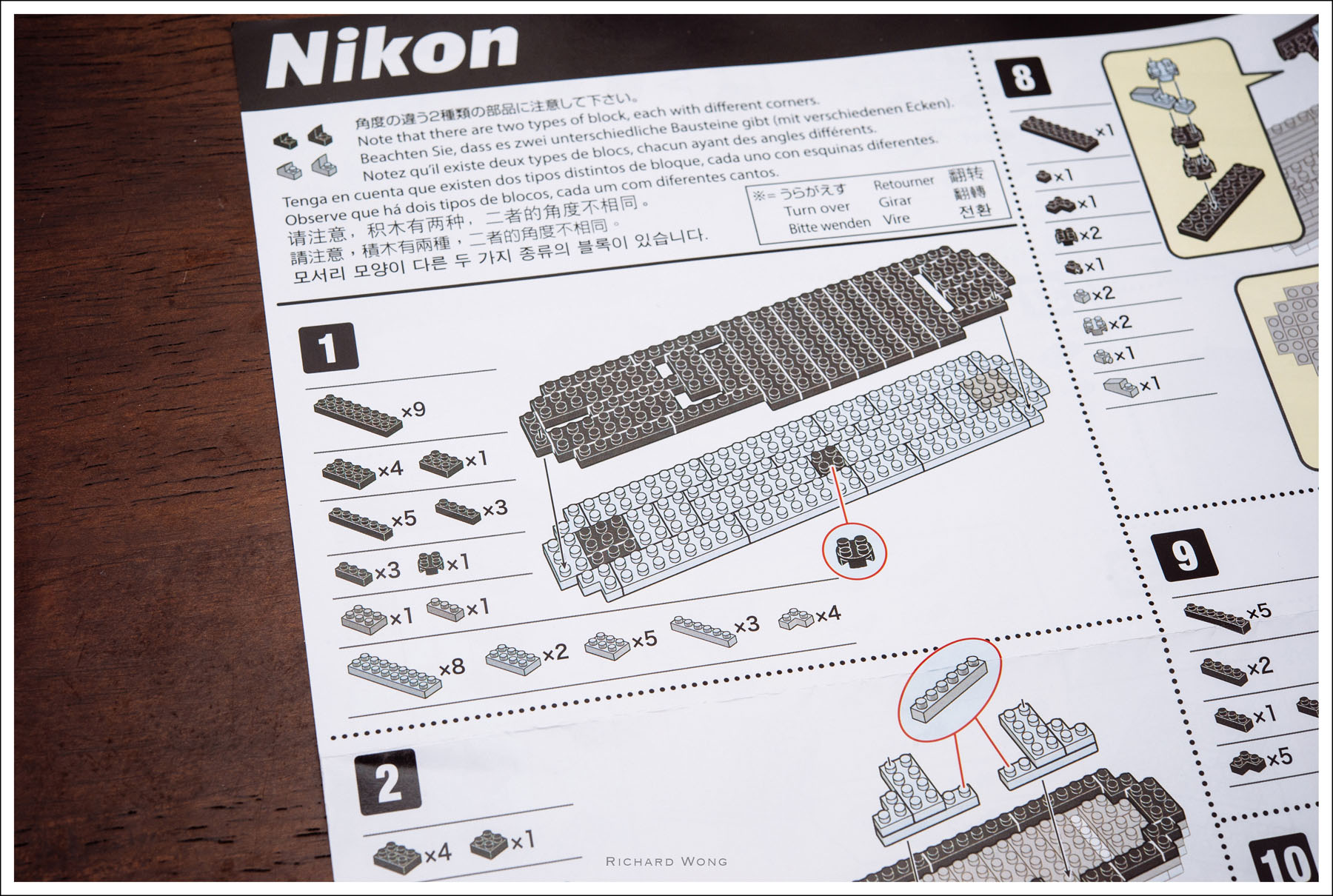 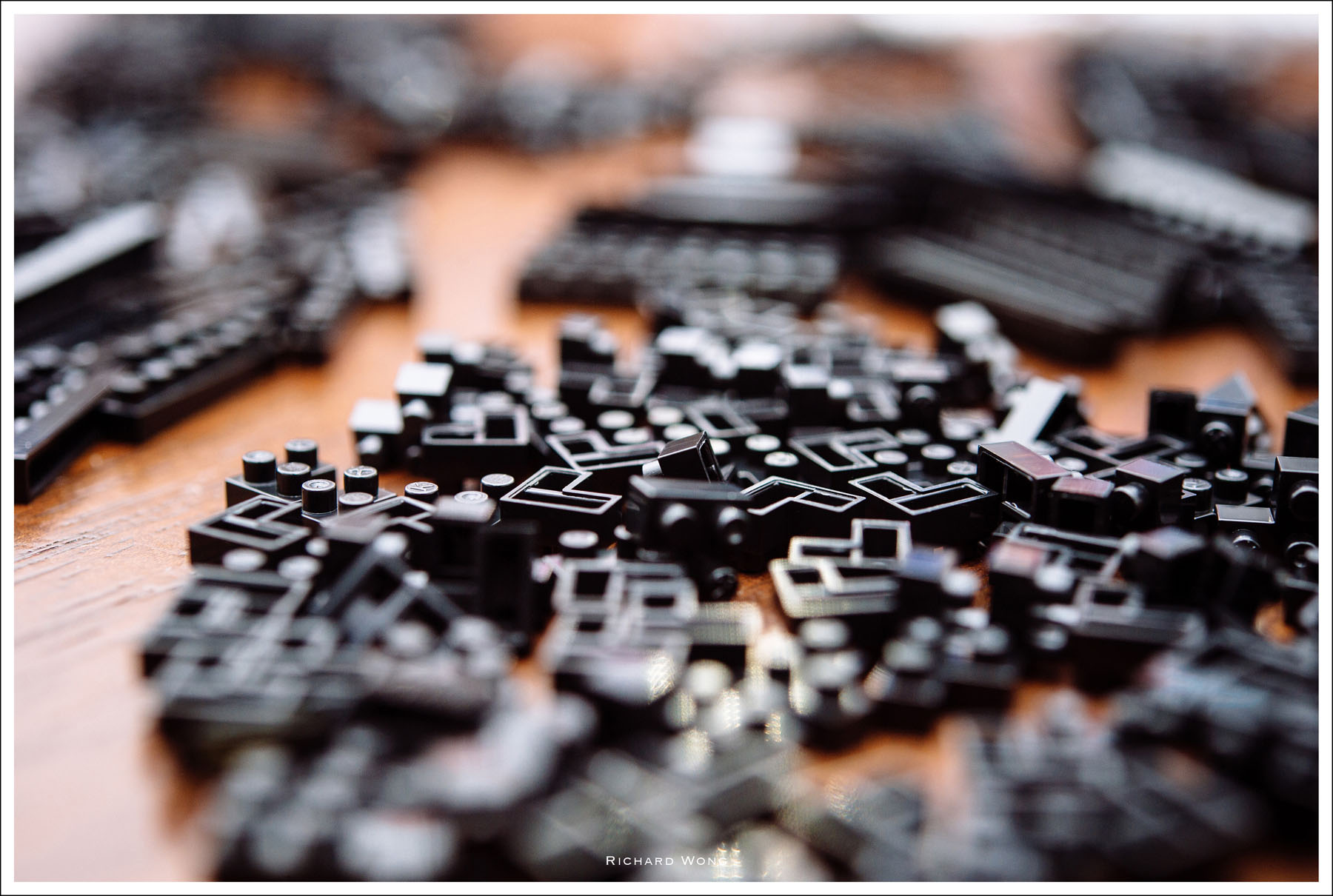 The blocks are really tiny, especially the 1×1 or 1×2 blocks. I was so worried that I would drop some of them onto the floor and never able to find them again. Luckily it didn’t happen to me but definitely try not to drop anything onto the floor, especially if you have a carpet floor. 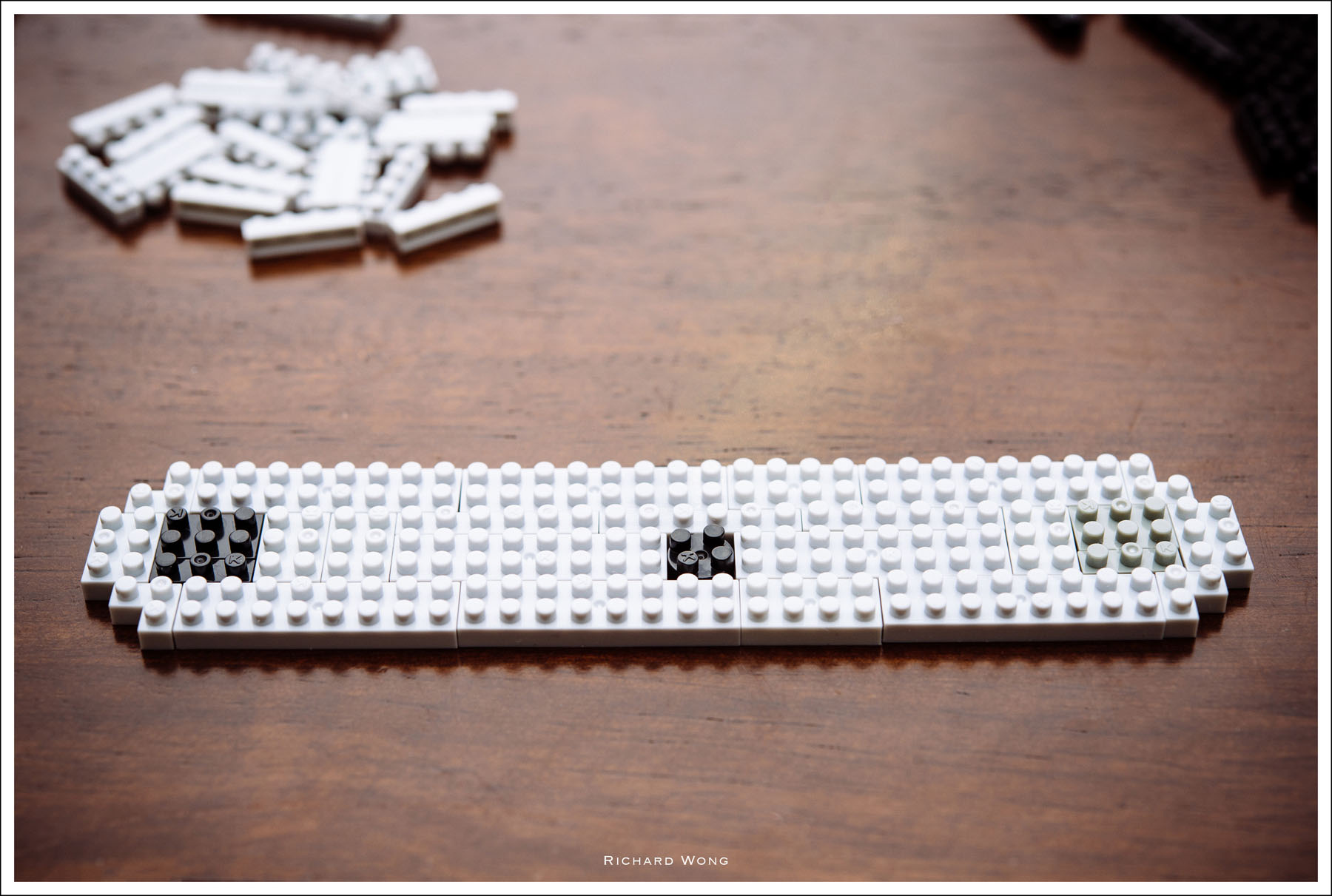 Half of step 1, took me almost 20 minutes to get to this stage 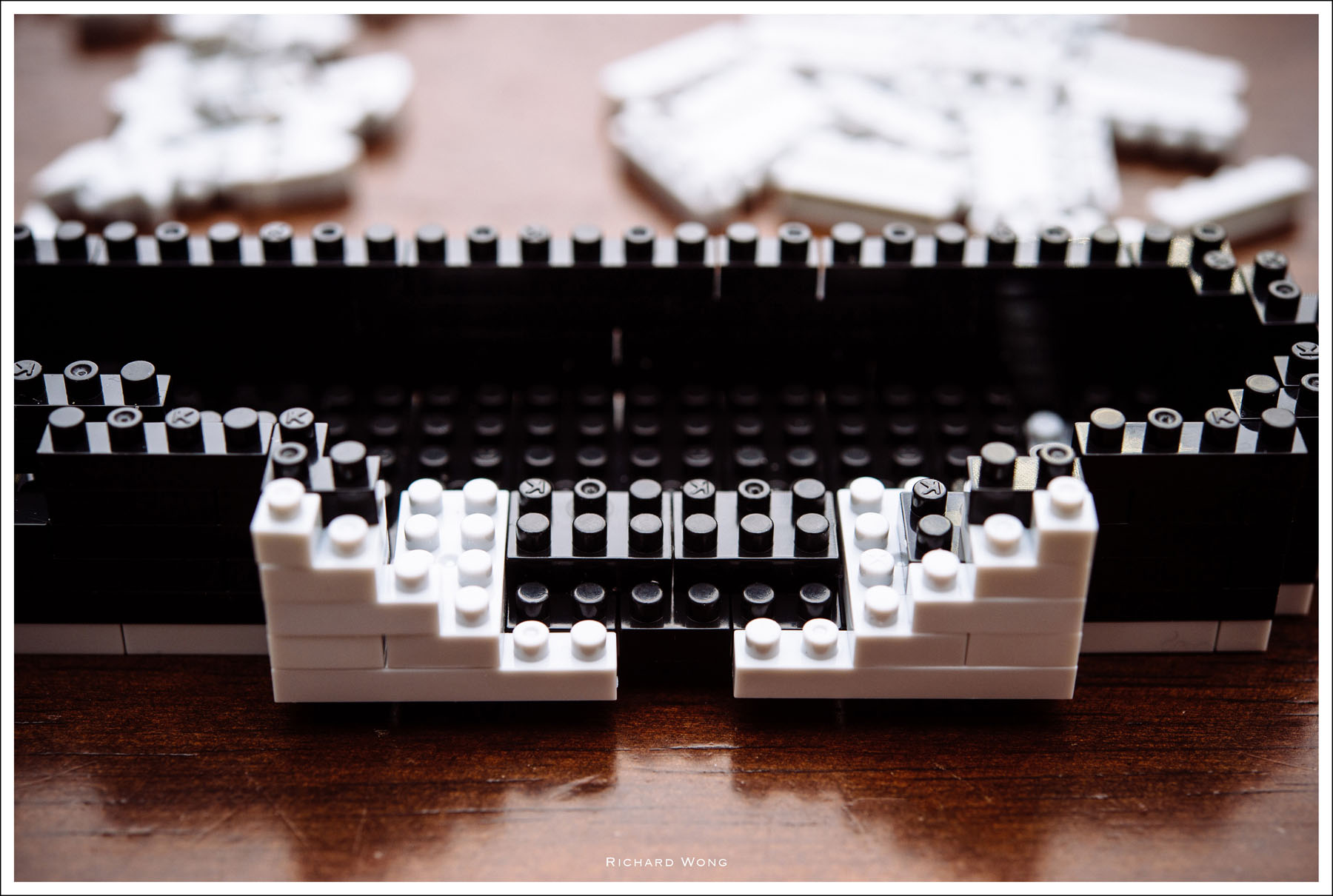 The bottom of the F mount 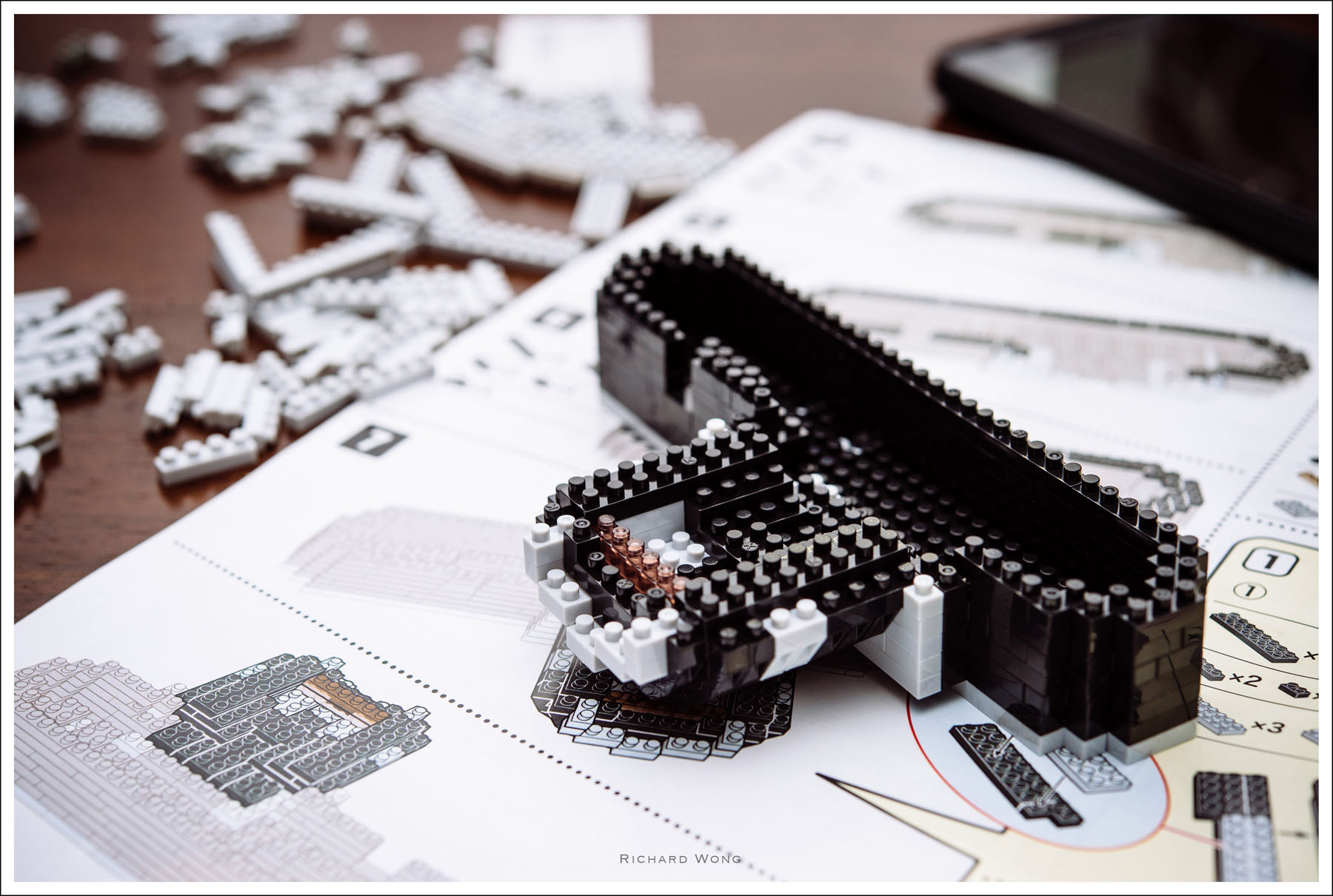 After 2 hours or so, I got the base of the camera built, and you can see a bit of the lens. The transparent orange bit is the front element of the lens. 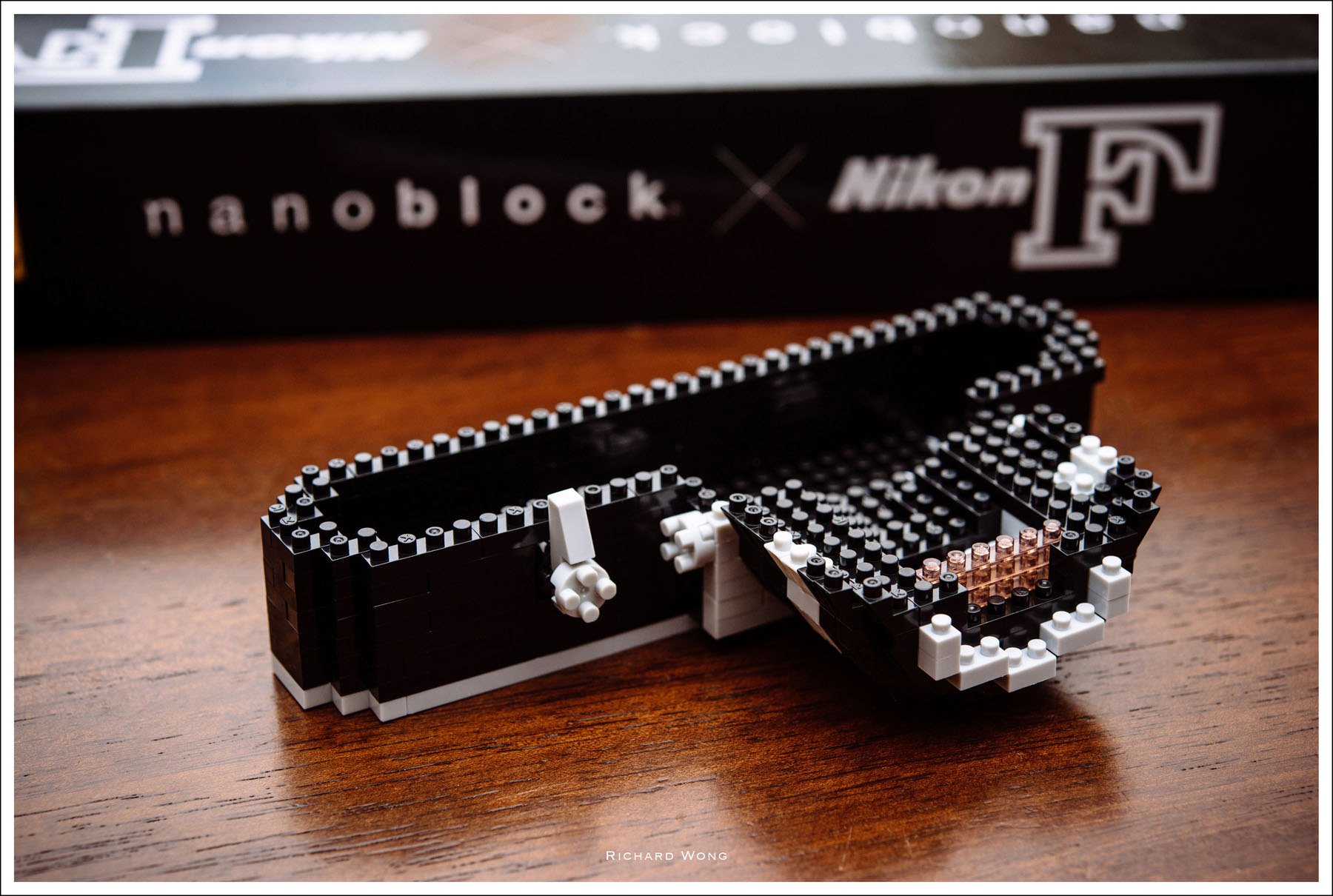 The timer switch (light grey switch on the left) is movable just like the real camera. 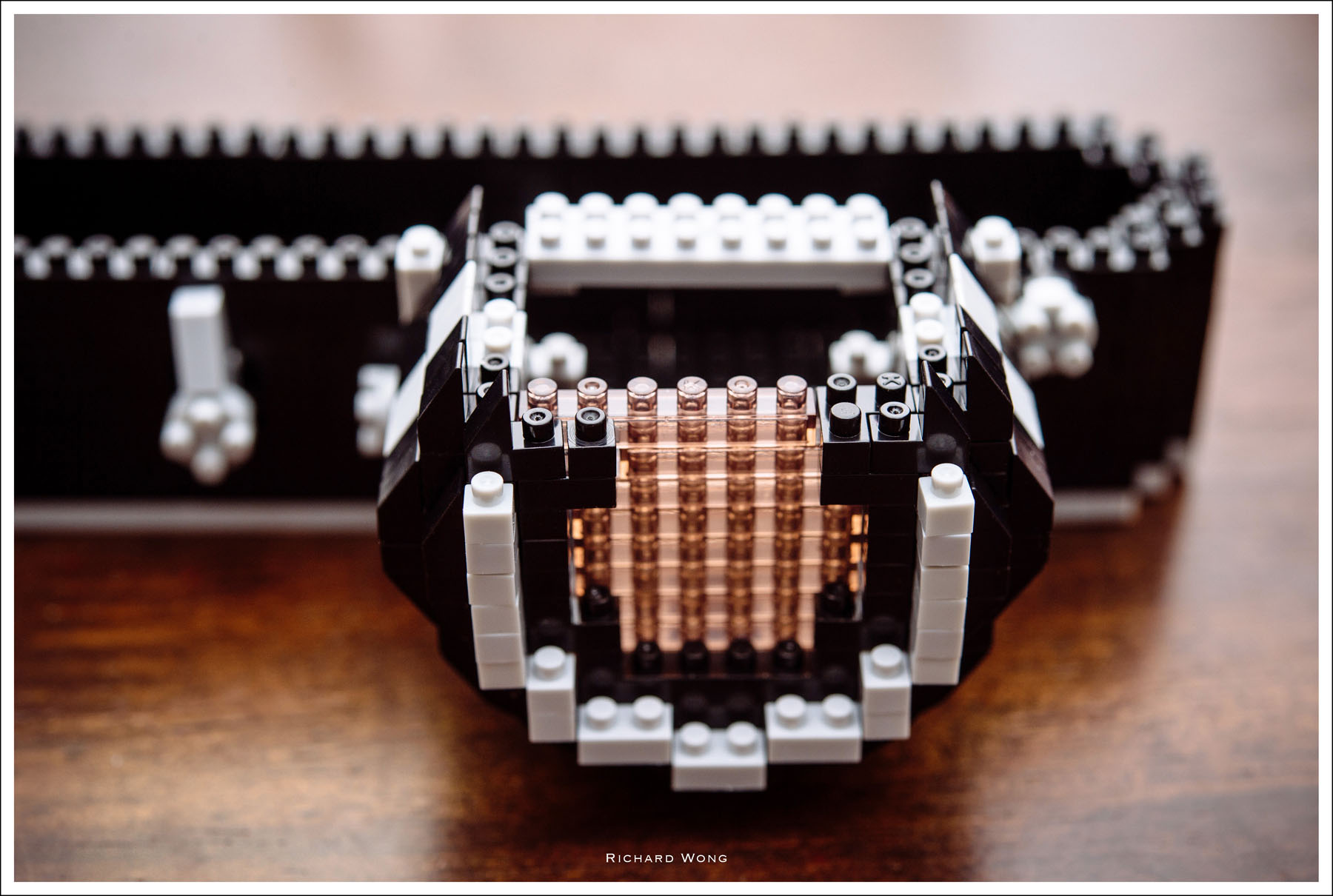 The front of the lens is almost complete 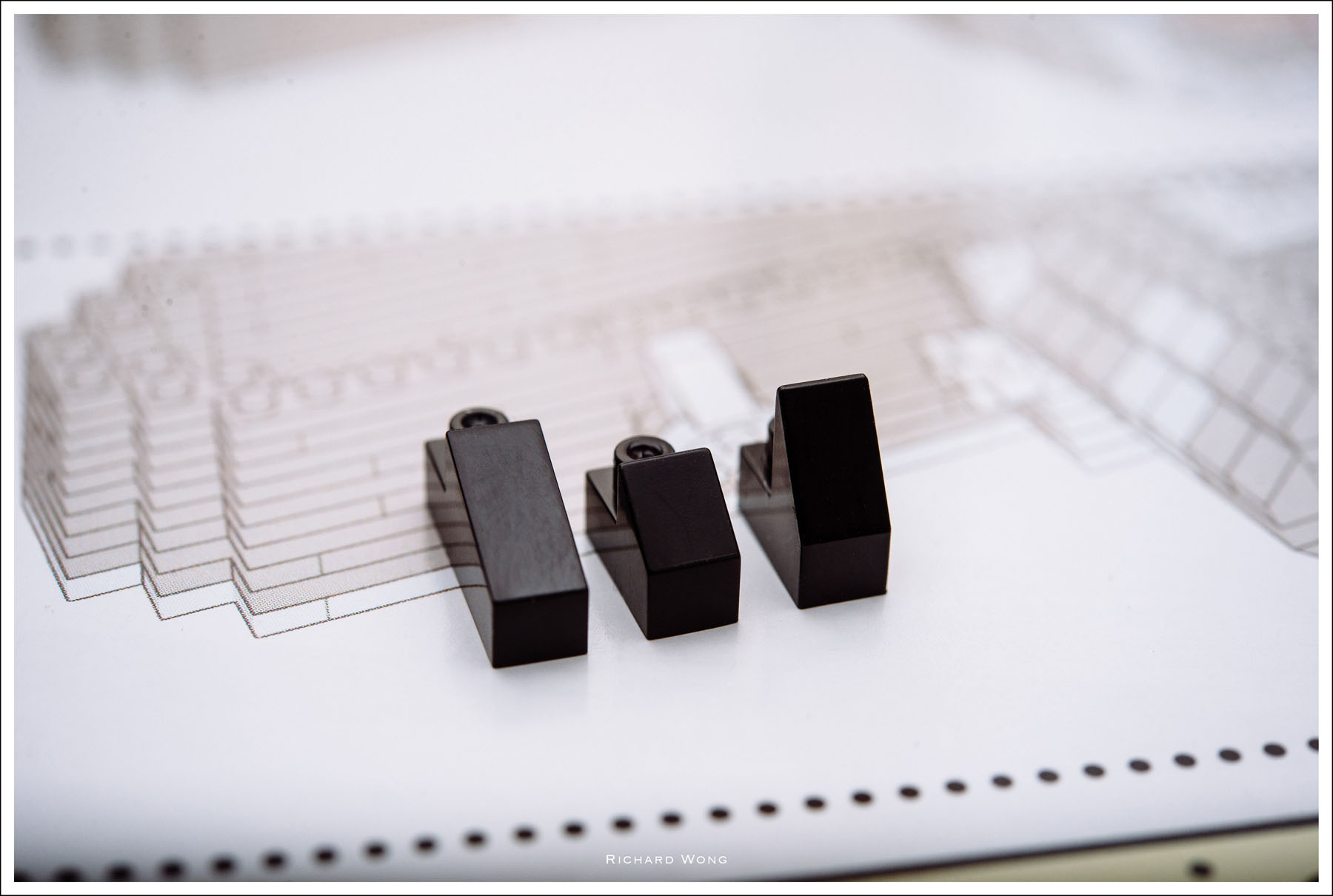 There are three very similar pieces in the kit. The instruction manual warns you about that but the instructions are not really good at telling you which piece you should use at each step. So be really careful and don’t use the wrong one. I recommend checking the photo of the finished product if you are not too sure which one you should use. I’ve made a few mistakes during the build and end up having to reverse some of the steps and rebuild it again, which is not fun at all. 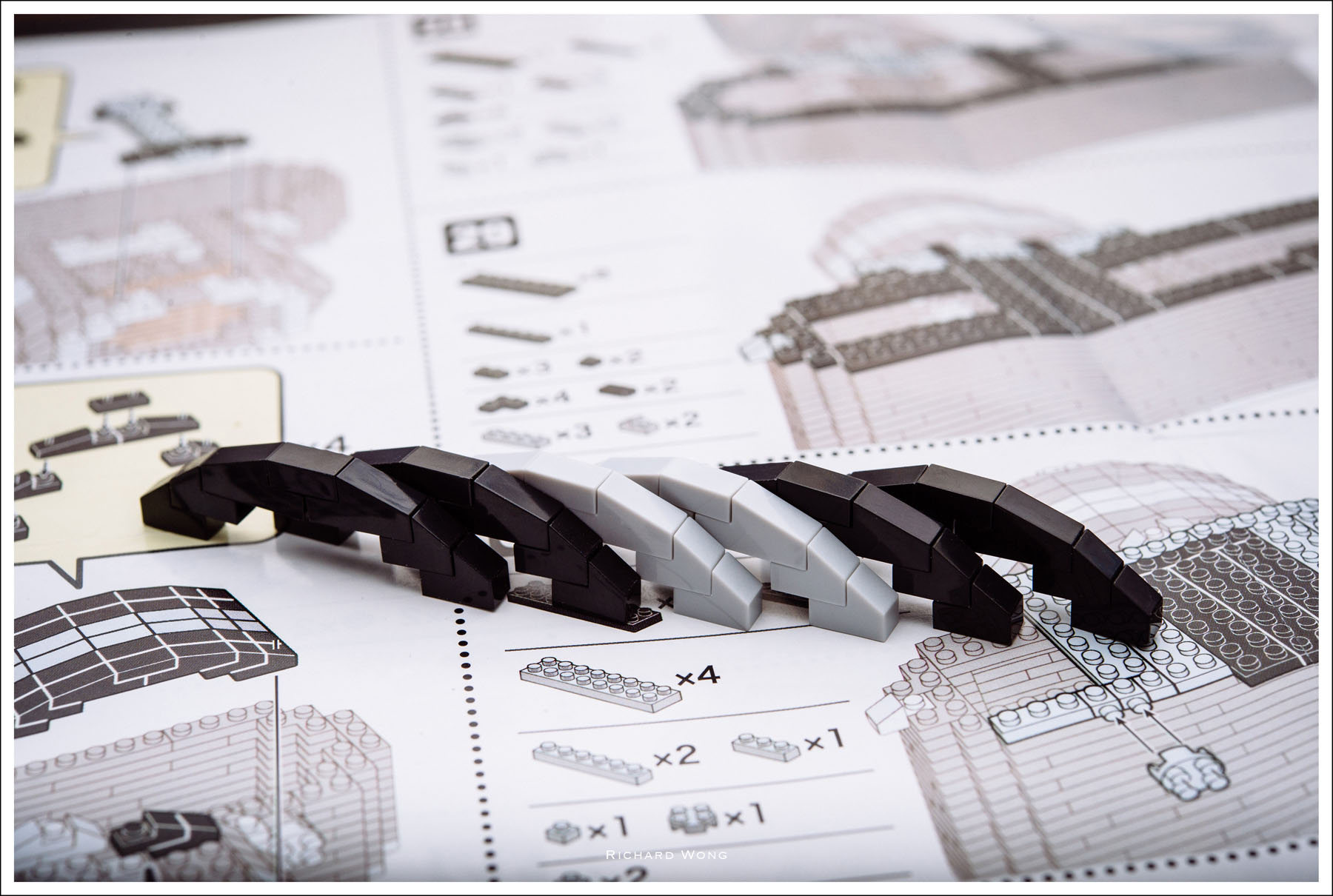 The top of the lens barrel 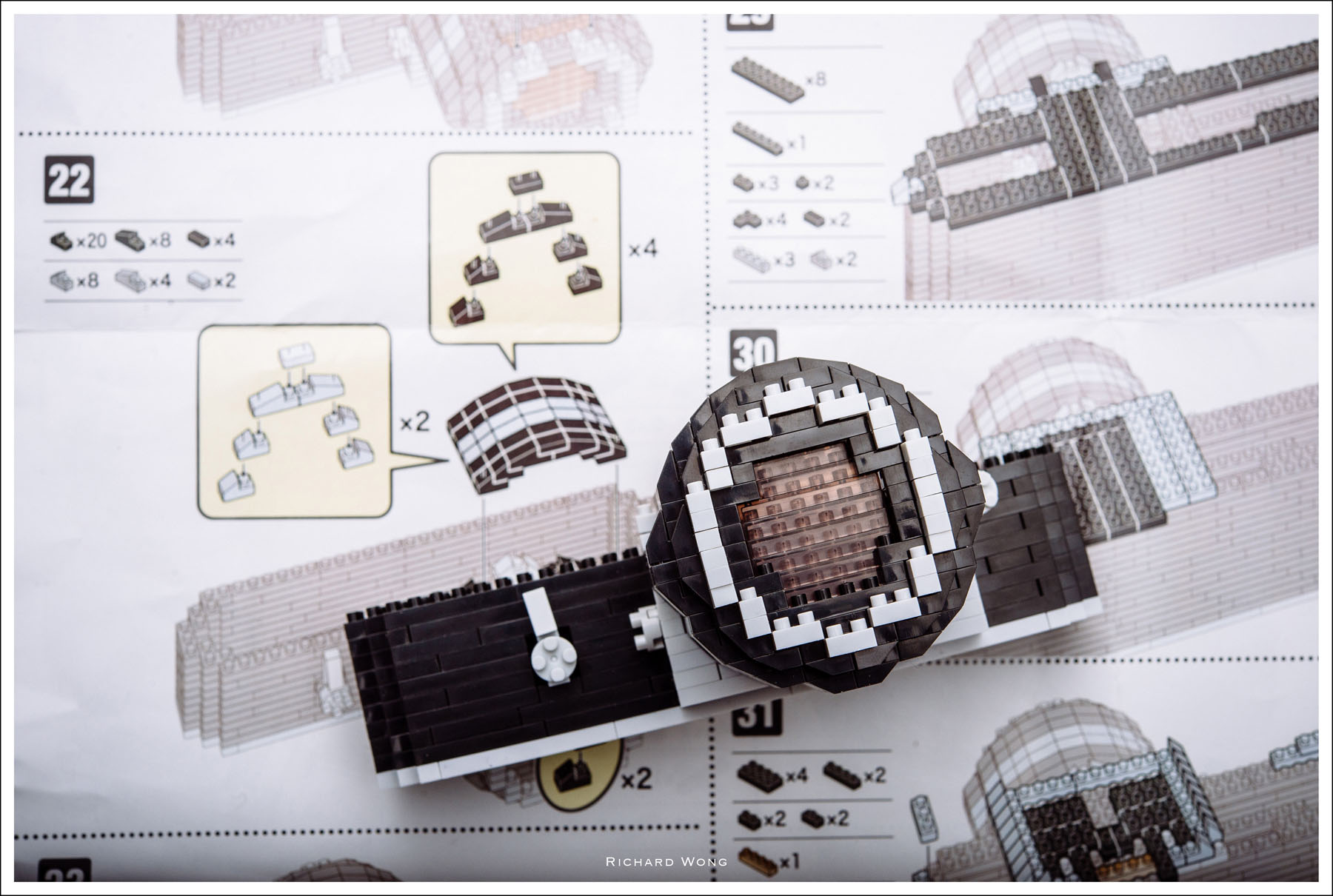 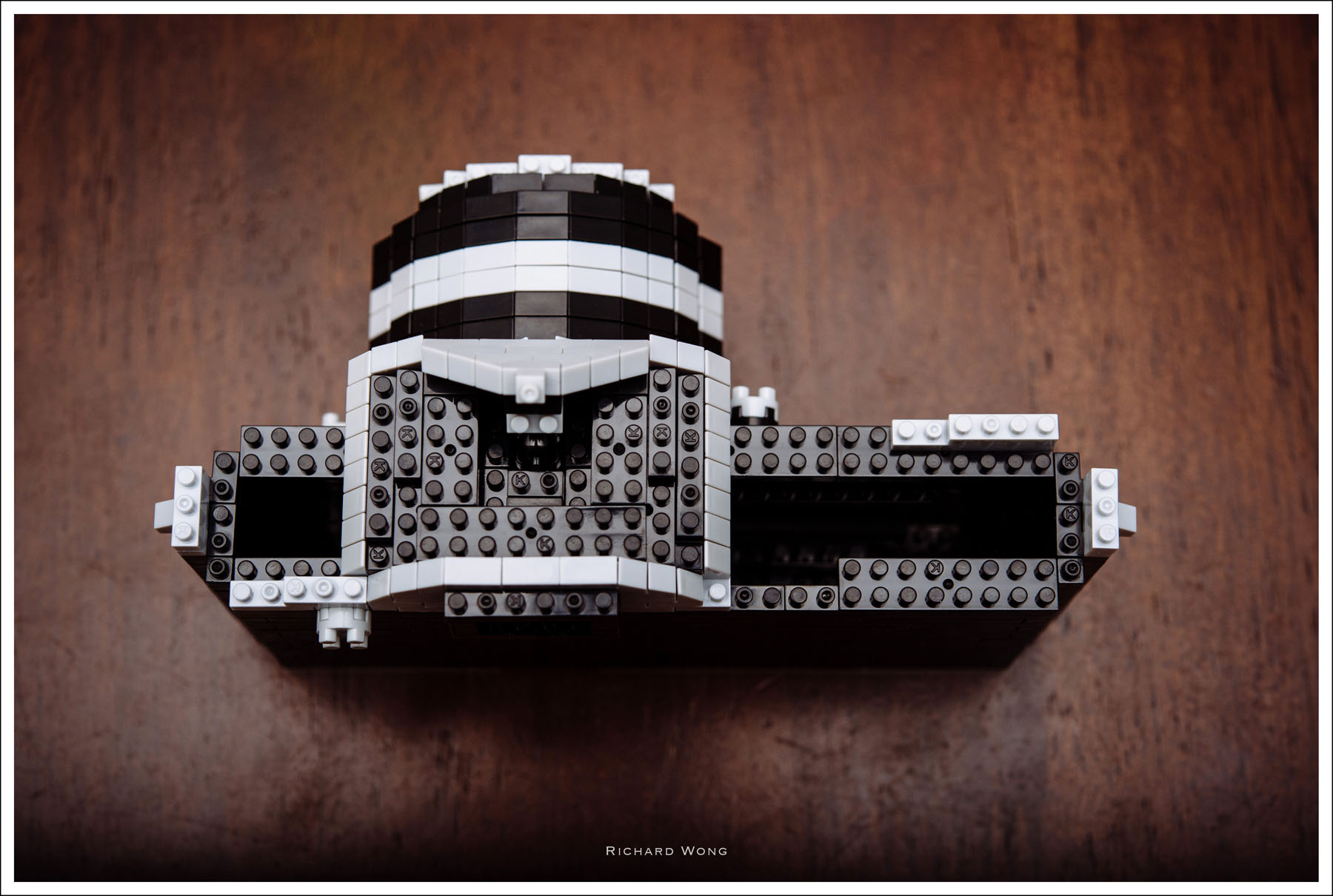 The top of the camera, nearly done 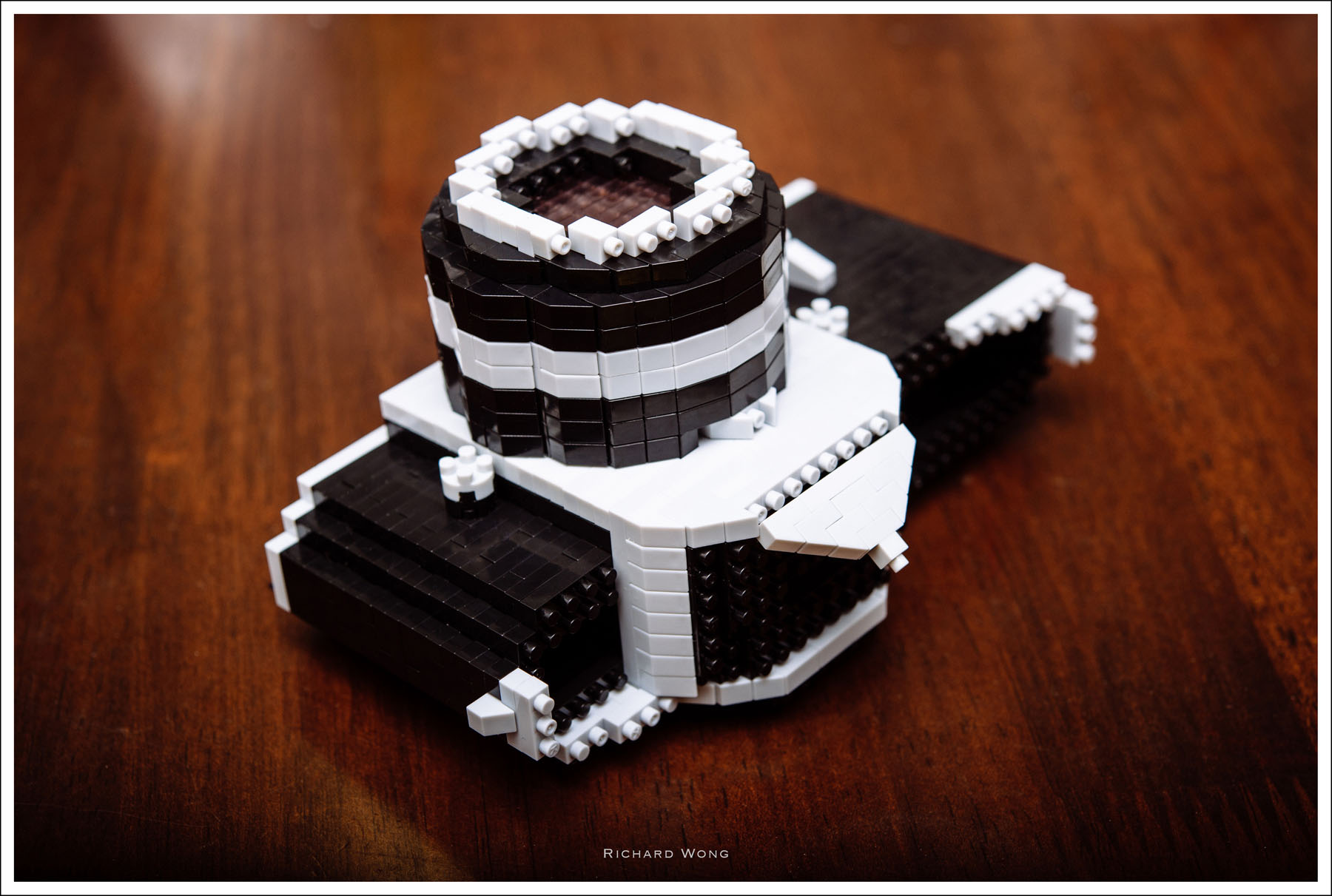 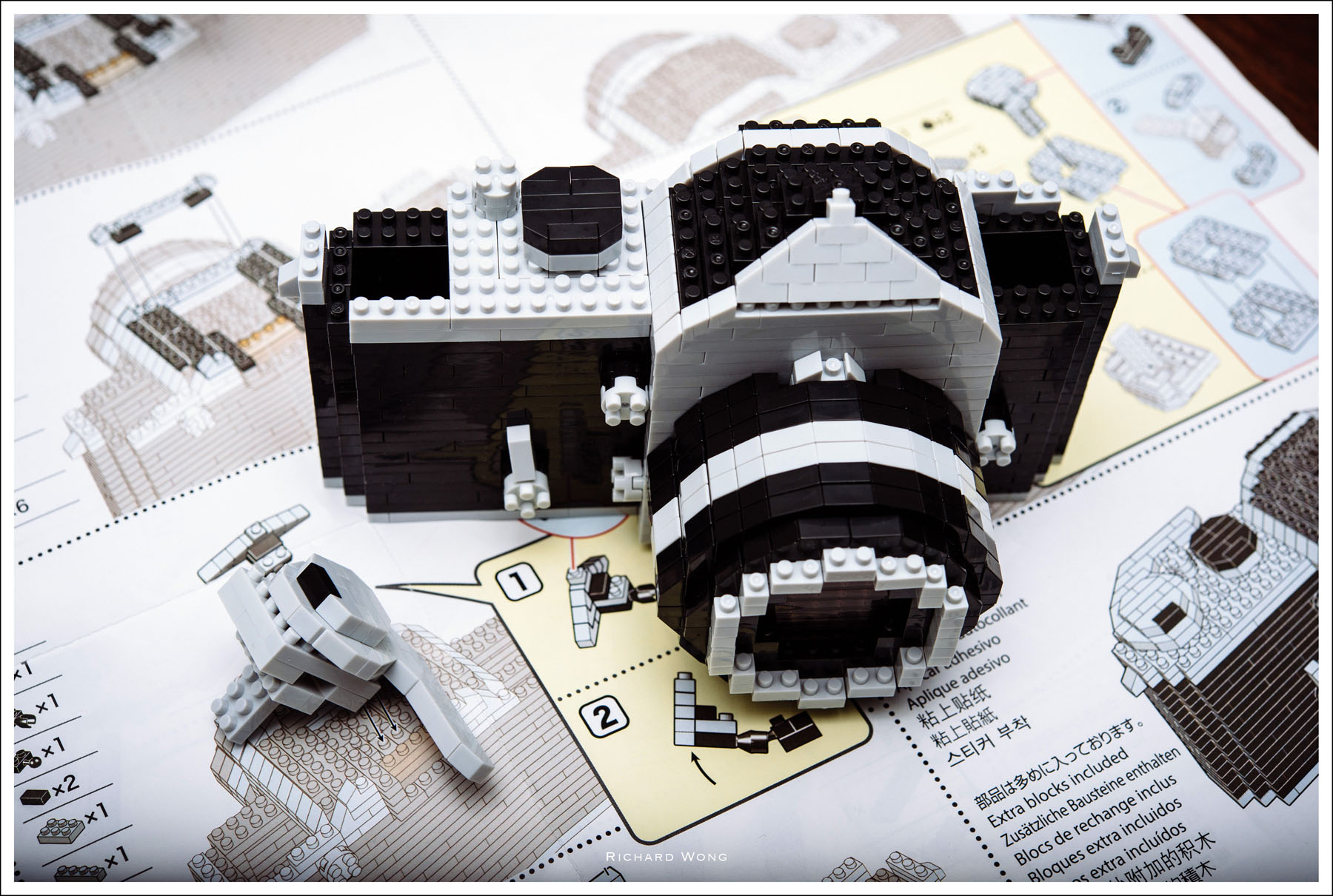 The bottom left is the frame advance lever. Looking at how it’s constructed, initially I thought the lever would be movable just like the timer switch, but when I mount it onto the body I then realise this is not true at all and the lever is completely non-moveable. I am a bit disappointed by that. 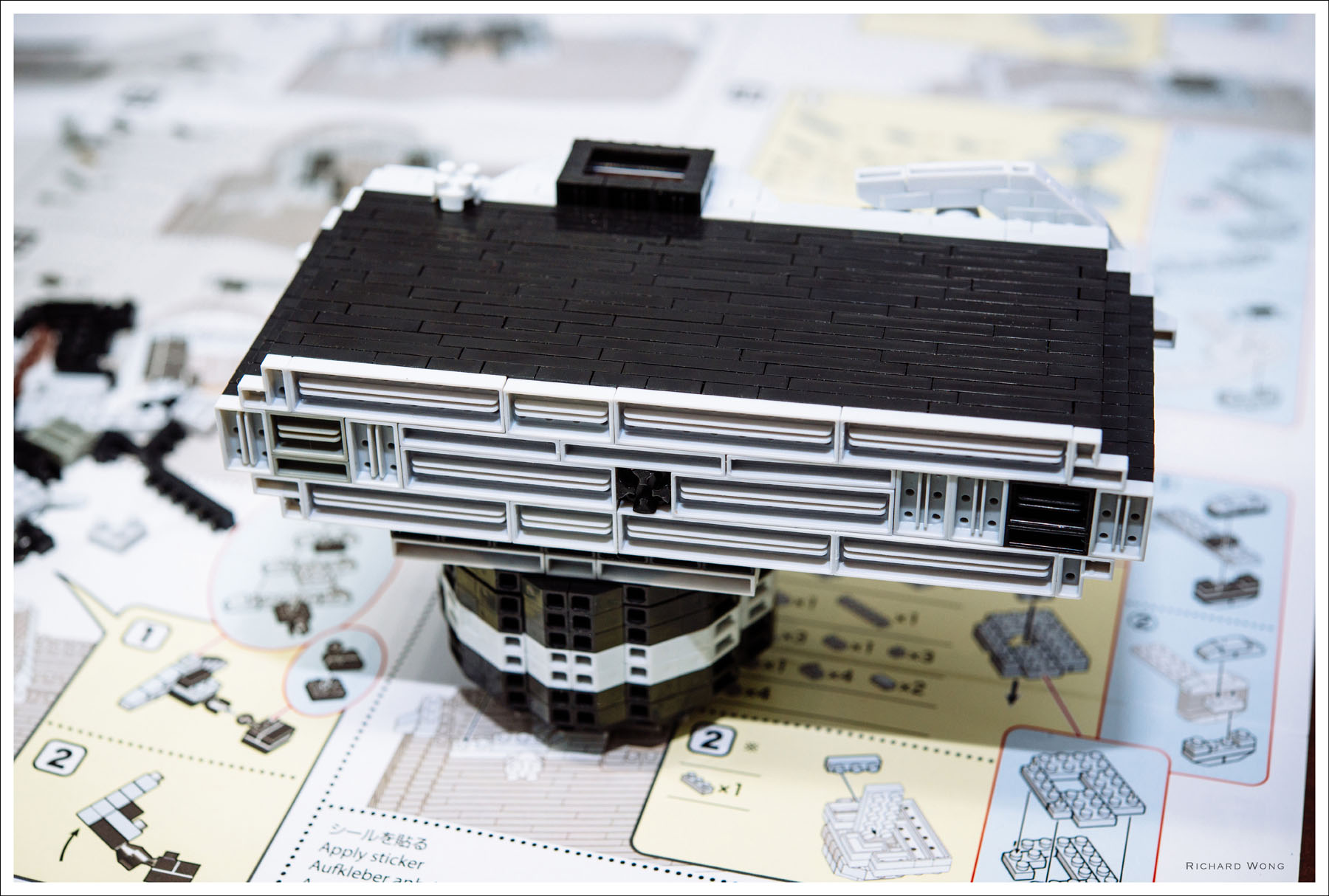 The kit has quite a few nice touches here and there, for example, at the bottom of the camera, it uses different brick for the tripod mount, ISO dial and the open/close switch.
Some of the finishing touches include the “Nikon” and “F” sticker on the prism. The viewfinder is completely non-fictional. It would be really cool if I can look at the world through the viewfinder. Of course it would be quite hard to implement as there is no mirror in the kit. 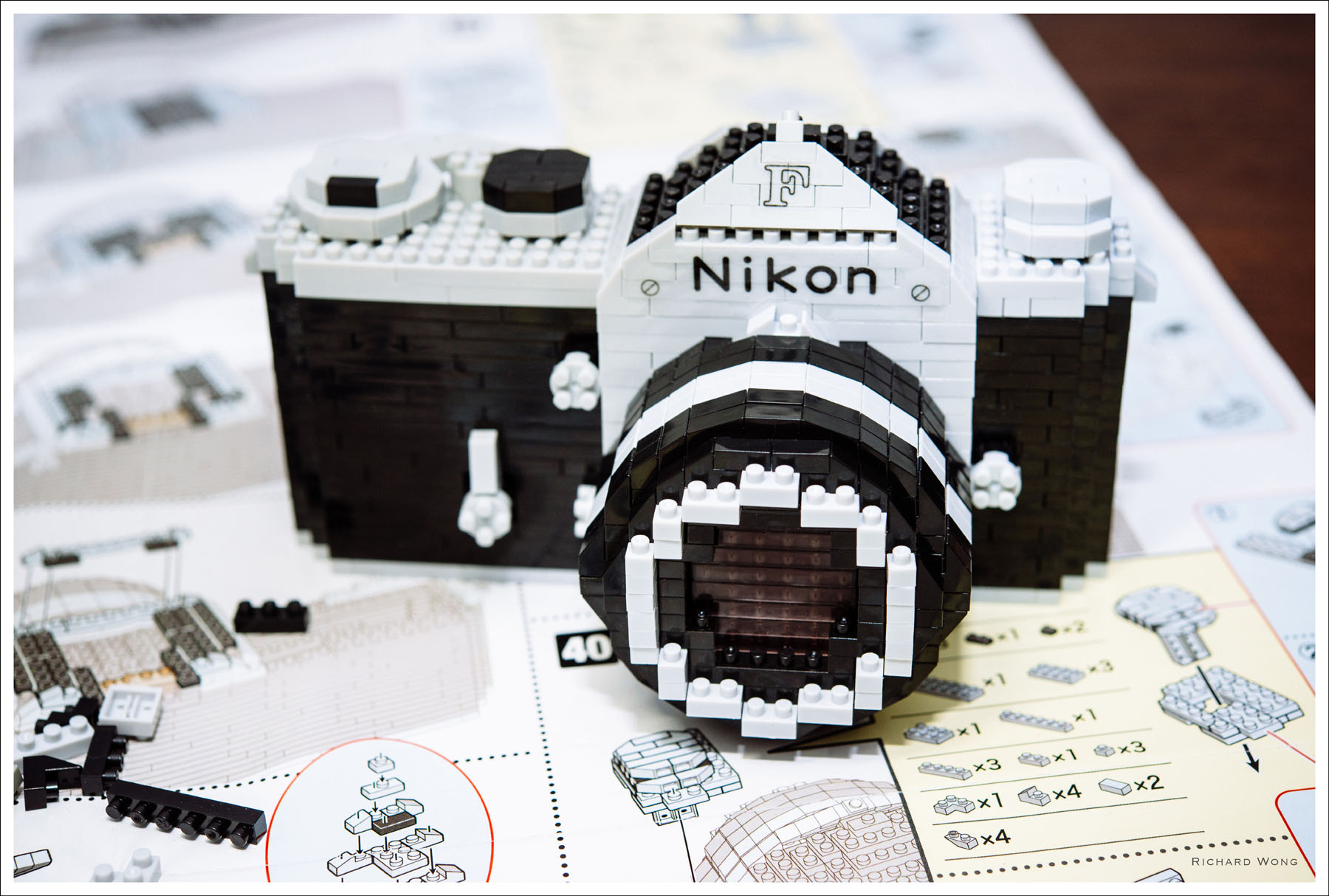 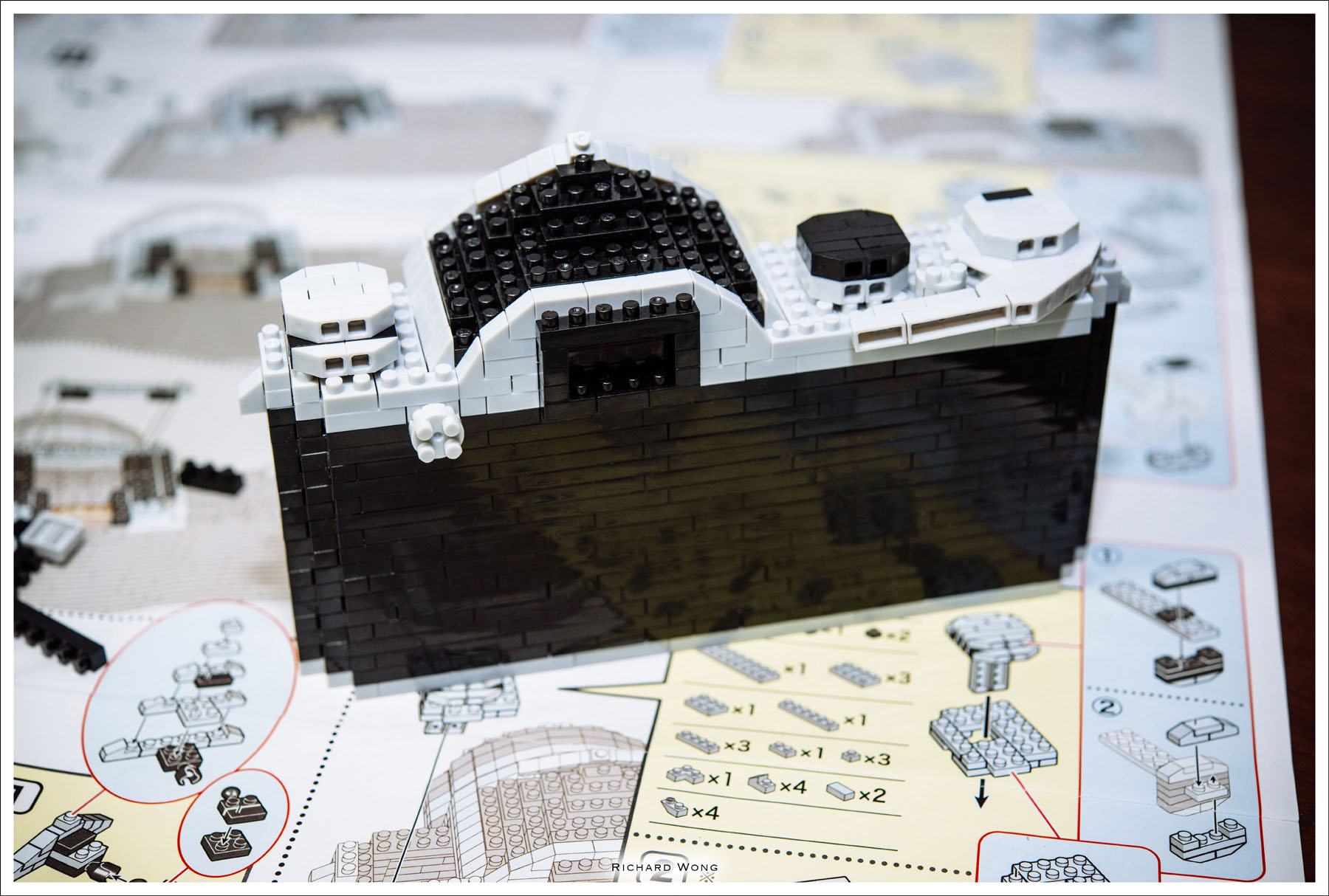 It took me 6 hours to finish the build. I definitely wasn’t expecting it would take me such a long time. But around 2/3 of the time was spent on finding the required blocks for each step. I would suggest you just seperate the blocks of the same size and shape into small containers right at the start of the build as that would speed up the total build time tremendously.
Overall I’m happy with this Nanoblock X Nikon F kit. It looks quite close to the real camera, only slightly smaller (check out the comparison photos with a real Nikon F at the bottom).  One thing I really like about the Nanoblock kits is that they are so small and can easily fit on any bookshelf or display case. There are many cool Lego kits I really like but never bought because I know I don’t have the space required to display them properly. With the Nanoblock, this really shouldn’t be a problem as most of the kits are very small size once built. 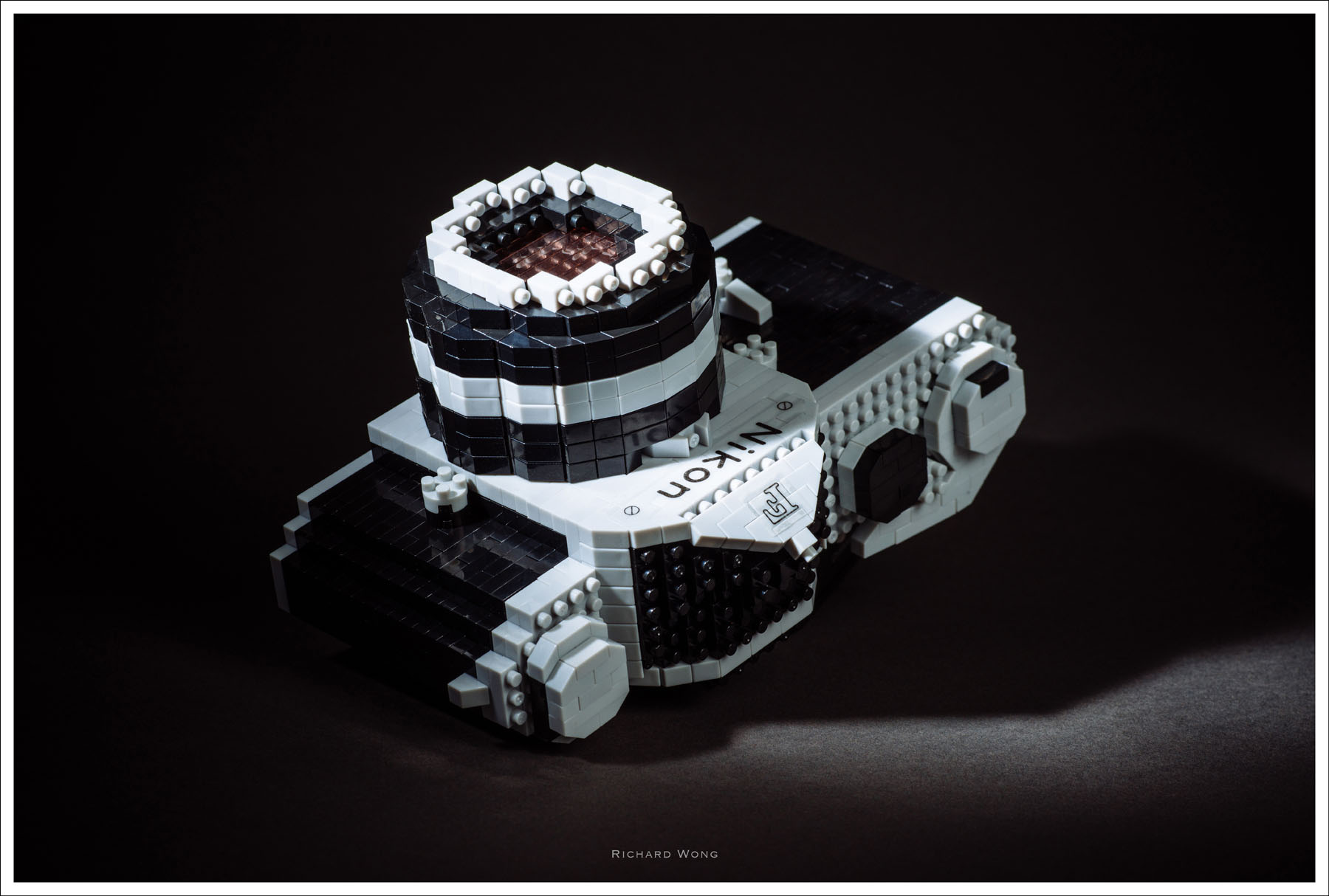 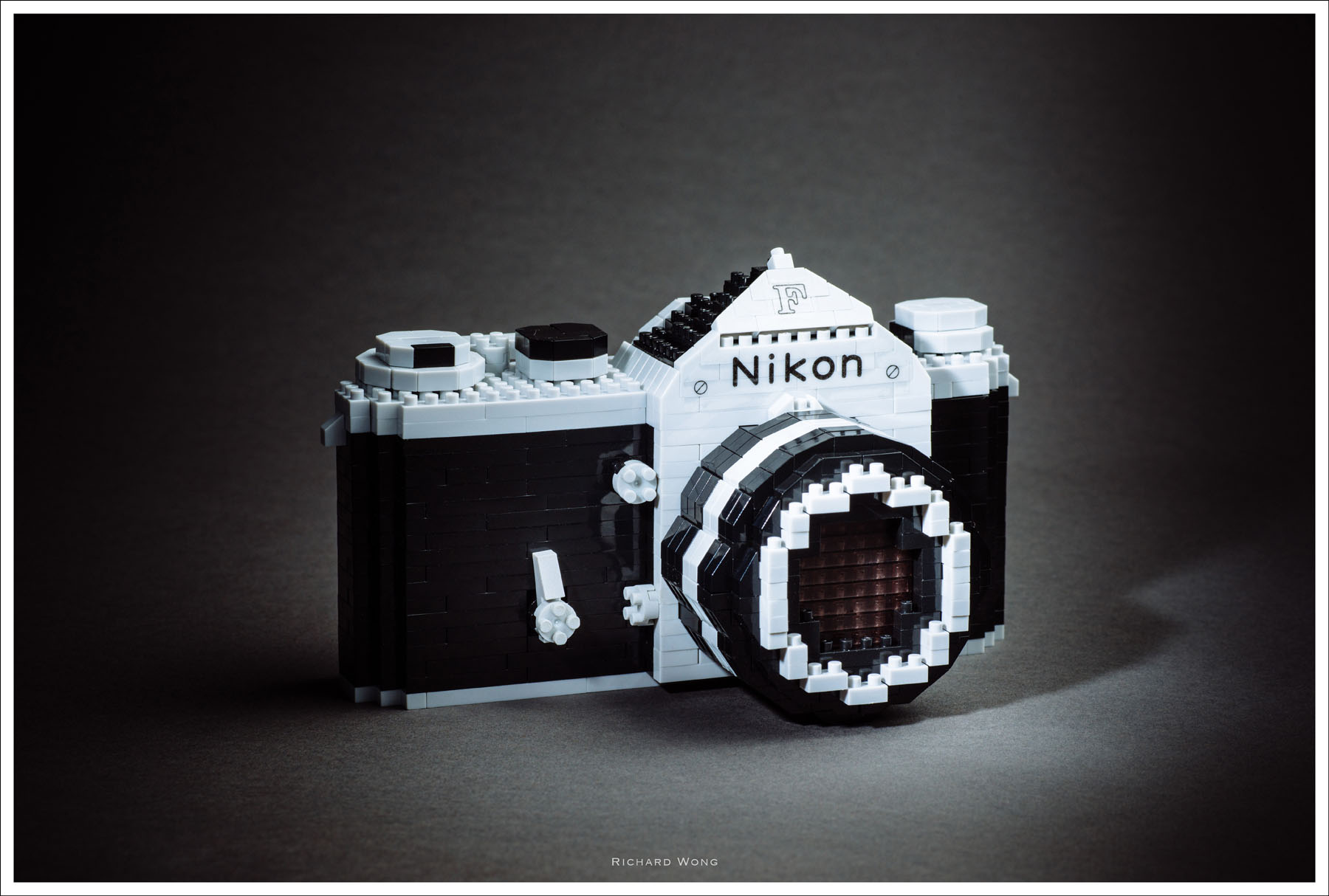 Let’s put it side by side next to a real Nikon F. The Nanoblock F looks pretty nice and accurate, just a bit smaller. 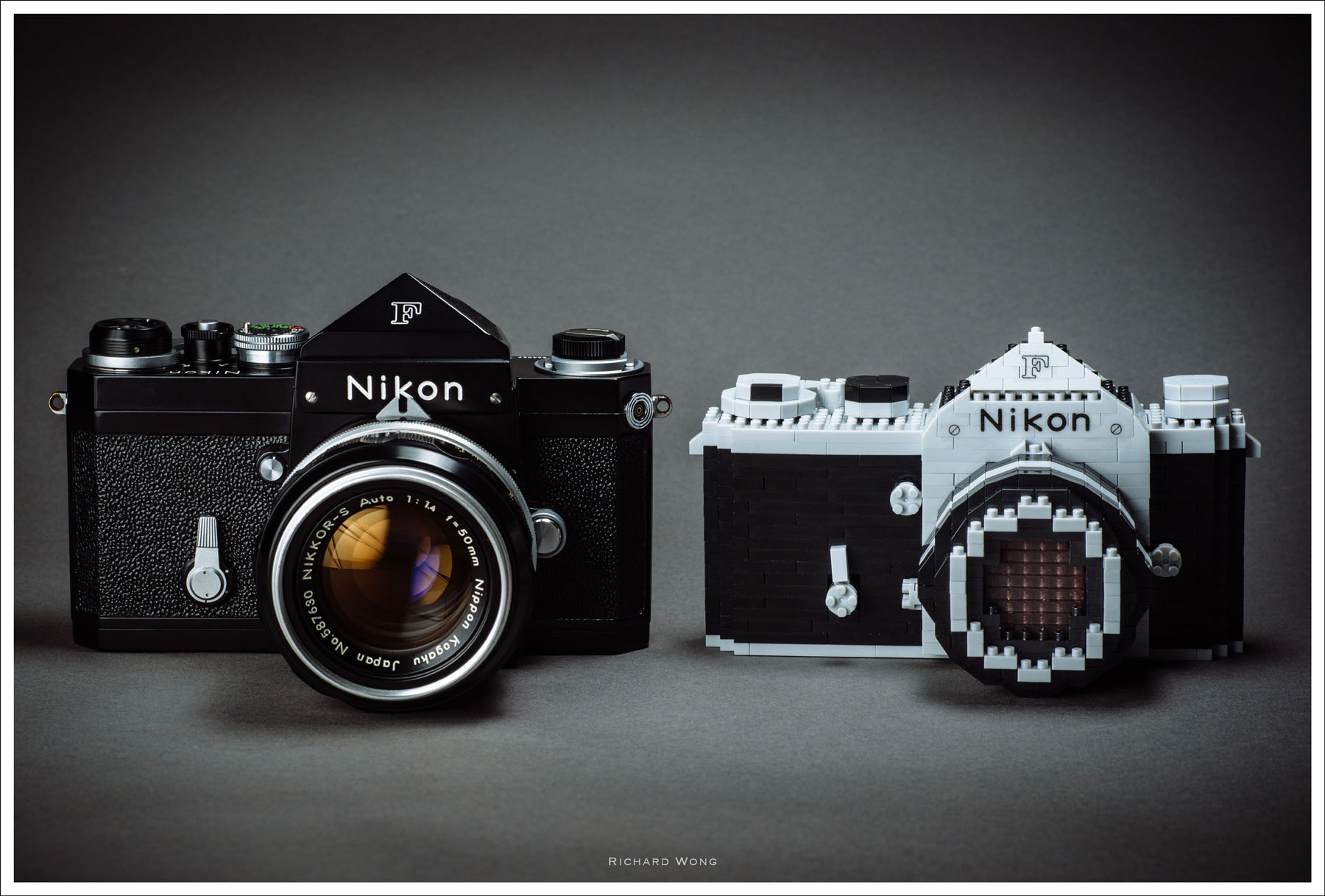 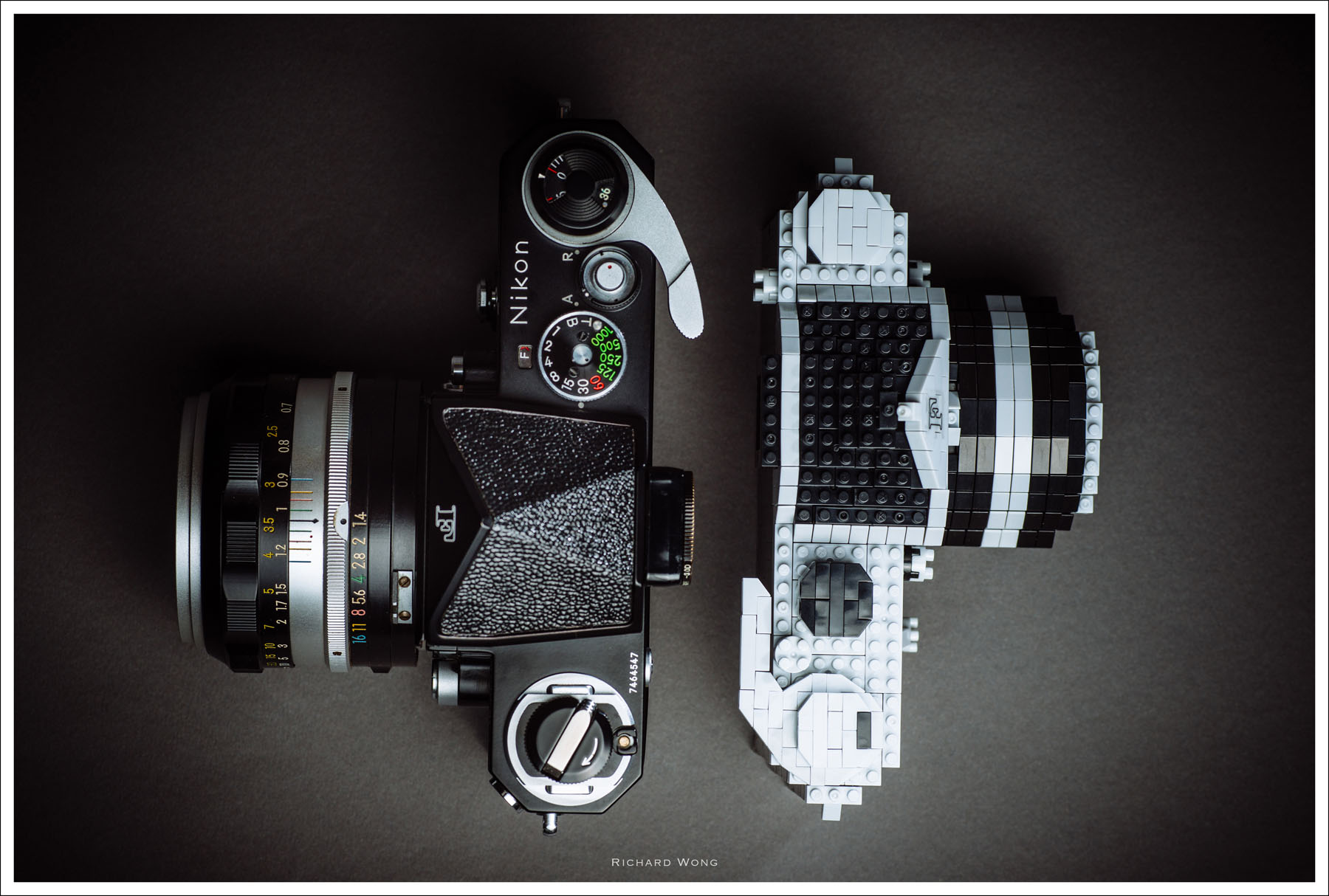 The overall quality of the Nanoblock kit is good, very good, but it’s not exactly Lego quality. Lego kits are perfect in almost every area, from the quality of the plastic they use, to the precision of each block and the overall design of each kit. Even the Lego instruction manual is so easy to follow and perfect. The Nanoblock in comparison, is just lacking that little bit of final polish and magic touch.
As mentioned above, I’m a bit disappointed that the frame advance lever and the shutter button are completely non-movable. And maybe partially because of the tiny size of the blocks, and partially because of the design of the kit, some of the parts are a bit loose and can come off easily if you are not careful. When I was building the kit, I had half of the frame advance lever and the timer knob fall off the camera many times without even noticing it. It would be good if the blocks would snap and hold more tightly together.
So yes, there are definitely rooms for improvement,  but having said that, if you love building blocks and love cameras, this is something you’ll love to build and have one on your display case. And Kawada, please make more camera Nanoblock kits like this. Personally I would want a Nikon SP, how about you? What Nanoblock kit do you want?

Richard is a multi-award winning wedding/portrait photographer based in Auckland, New Zealand.  Richard’s website is www.photobyrichard.com