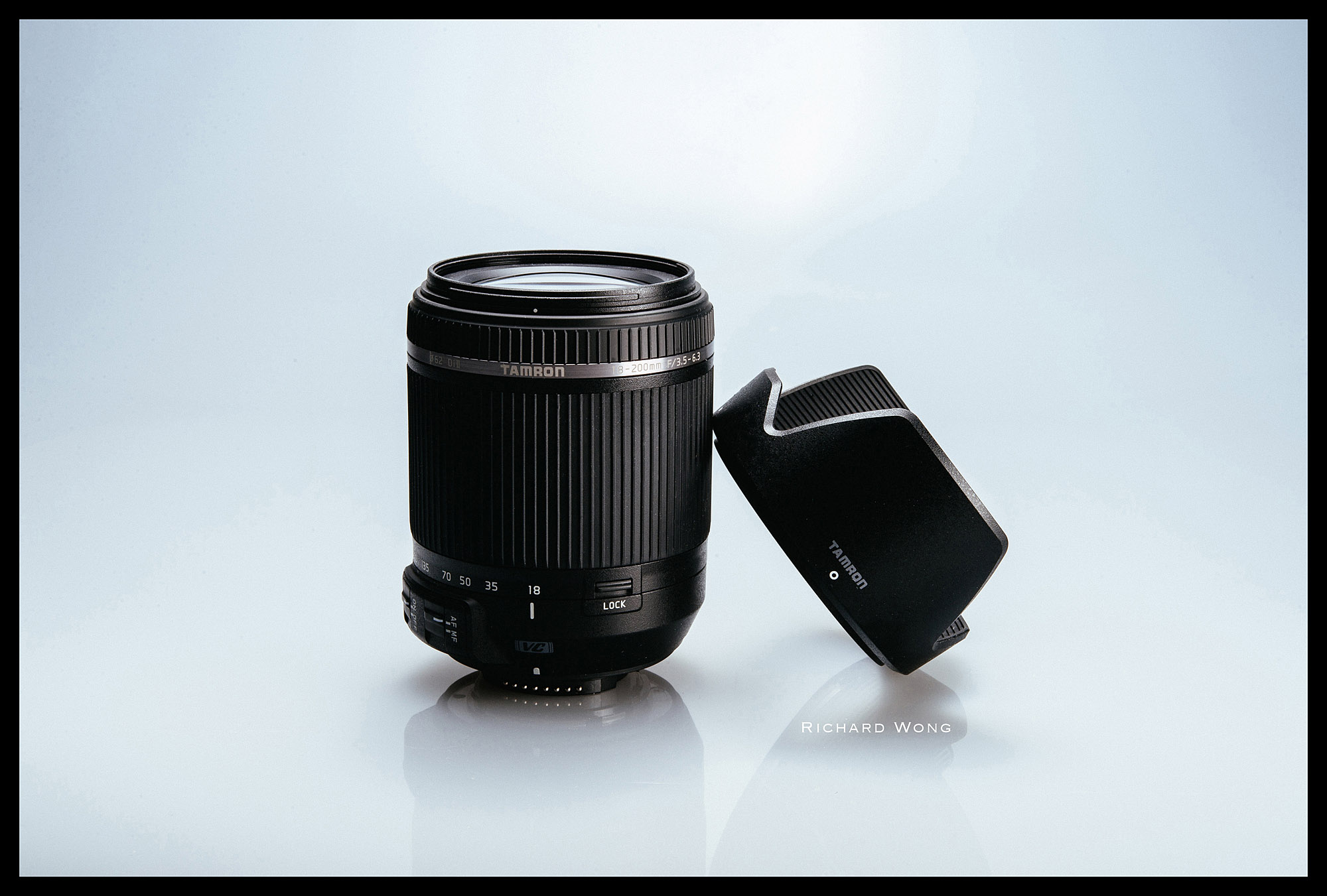 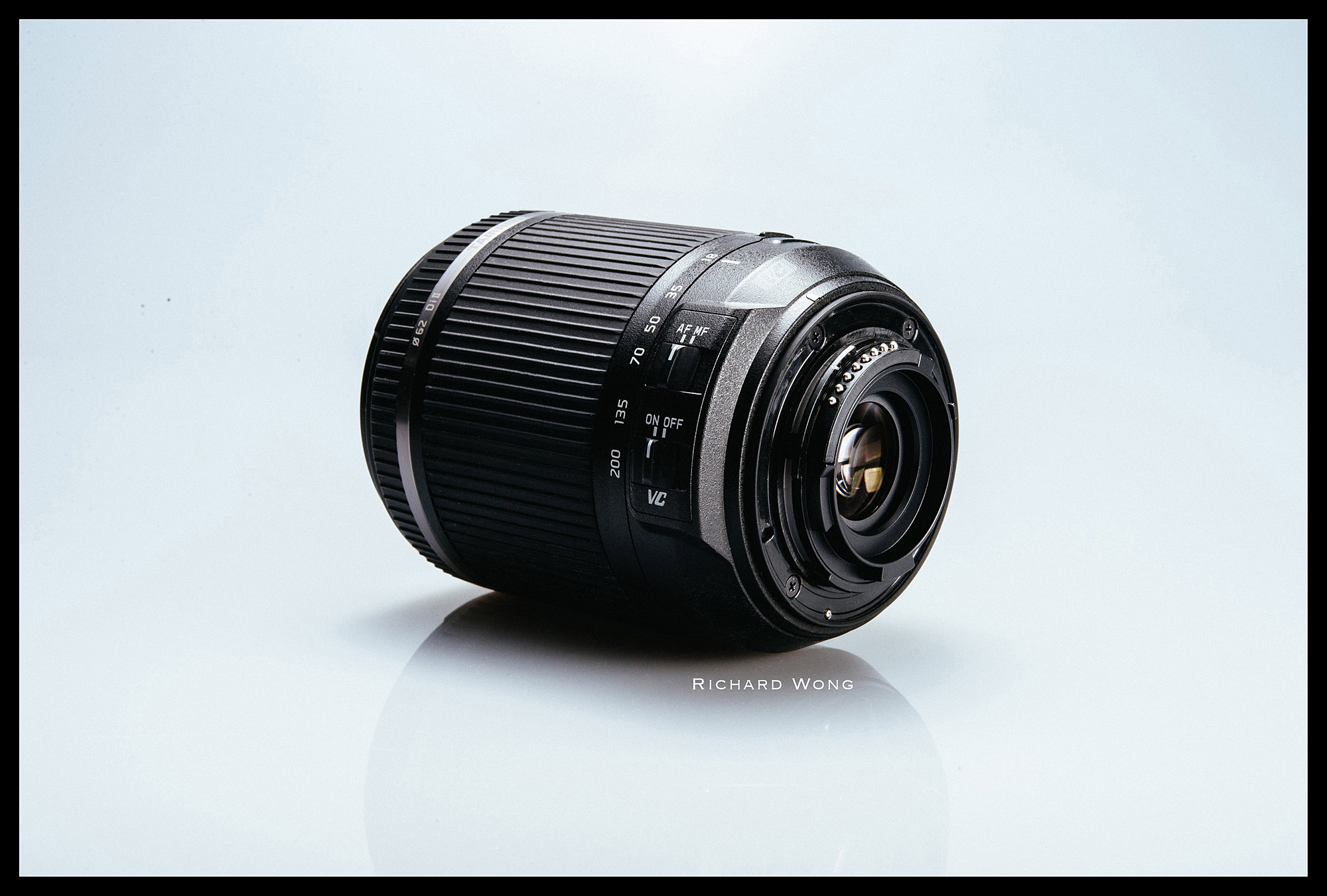 The best thing about the DSLR camera (or the mirrorless cameras) is that we can swap lenses to capture pretty much anything in any way we want.
The flip side is that we have to carry multiple lenses as we don’t know which lens we might want to use. But quite a lot of time we either don’t want to, or just can’t carry a bunch of lenses. And that’s when superzoom lens comes in handy.
The original Tamron 18-200mm (model A14) was announced back in 2005, about 10 years ago. While the A14 lacks optical image stabliser which limits its low light application, it’s very affordable price and compact size make it one of the best selling superzoom lens in the market.

Tamron has recently released the new 18-200mm f/3.5-6.3 Di II VC lens, model B018. Comes with it is the brand new optical formula and very importantly the lens is now equipped with VC, the optical image stabilser. With the slightly more complicated optics design (now with 16 elements in 14 groups, including one hybrid aspherical element and one LD element) and the new VC feature, the lens is a bit bigger than the original 18-200 but it is still pretty compact at 75mm x 94.1mm and wouldn’t feel unbalance even when it’s mounted on a small DSLR. According to Tamron,  the 400g B018 is the lightest lens in the high-zoom class. 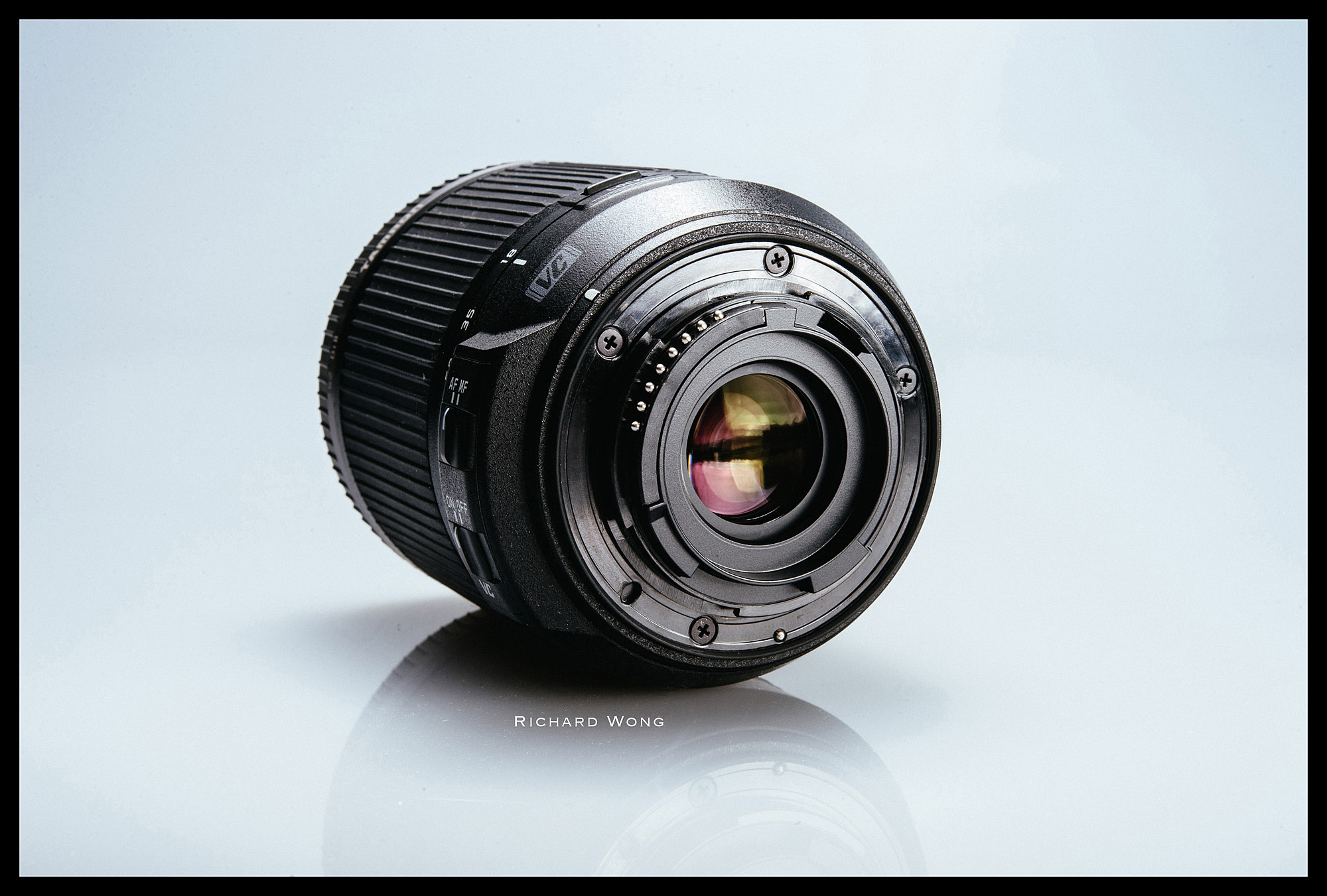 Like it’s predecessor, the Tamron B018 is pretty much completely made of plastic, including the lens mount. So it does feel a bit cheap and plasticky. But then it is a very cheap lens. You can purchase one from authorised dealer at under $400 NZD which AFAIK is the cheapest stabilised superzoom lens in the market. And while it’s made of plastic, it doesn’t mean the build quality is bad. The lens feels surprisingly solid and very well made. When you fully extend the lens barrel, the barrel has no play at all even when i try to wiggle the front of the lens. This is something even some of the more expensive 1st party lenses fail to achieve so a big thumb up to Tamron! And another little pleasant surprise is that, the lens has moisture resistant seal so you can take photo under light rain (but probably not a good idea to use it under heavy rain). It’s very good to see Tamron has put in extra efforts on a budget lens like this. So, it maybe a plastic lens, but it’s a very nice plastic lens. 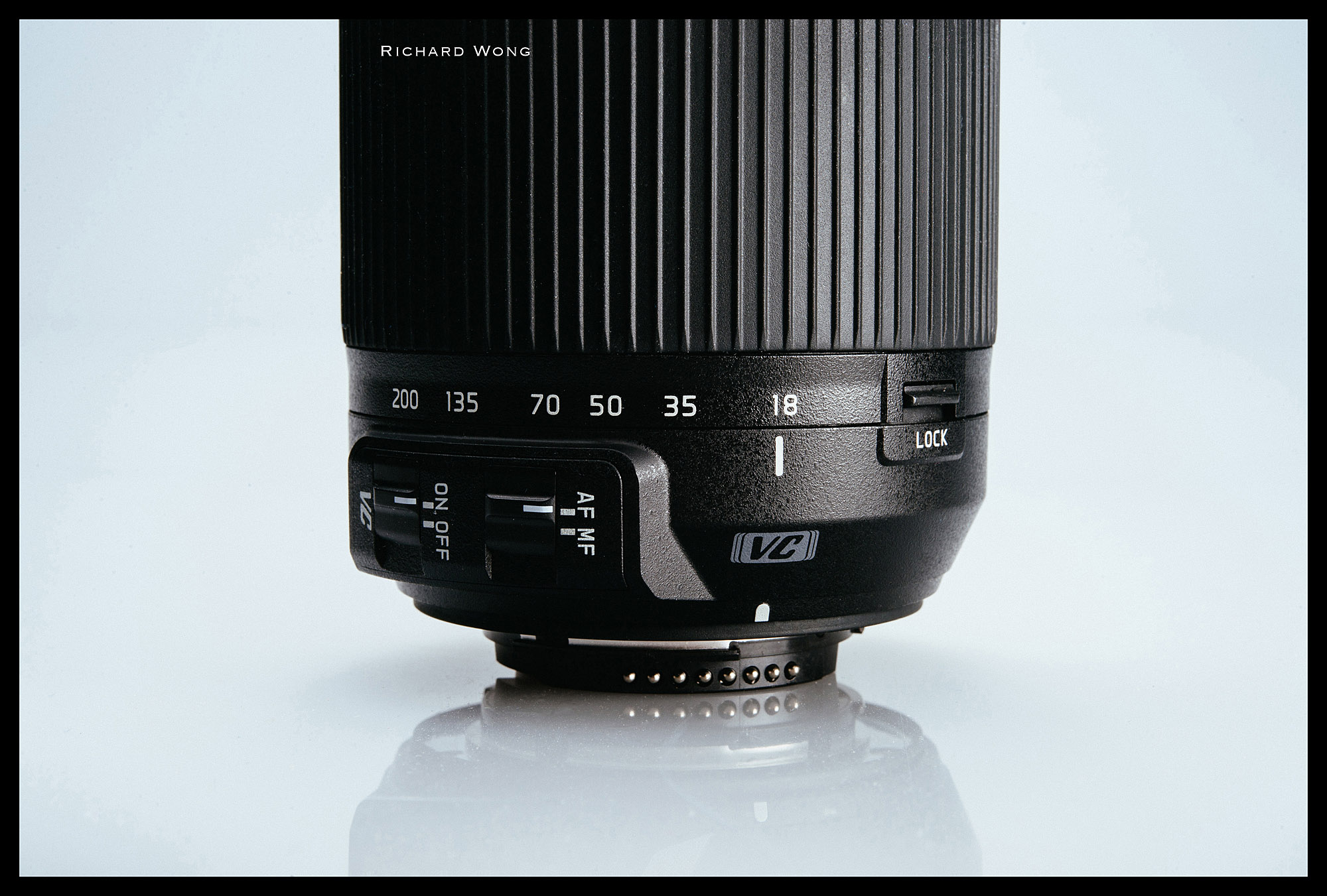 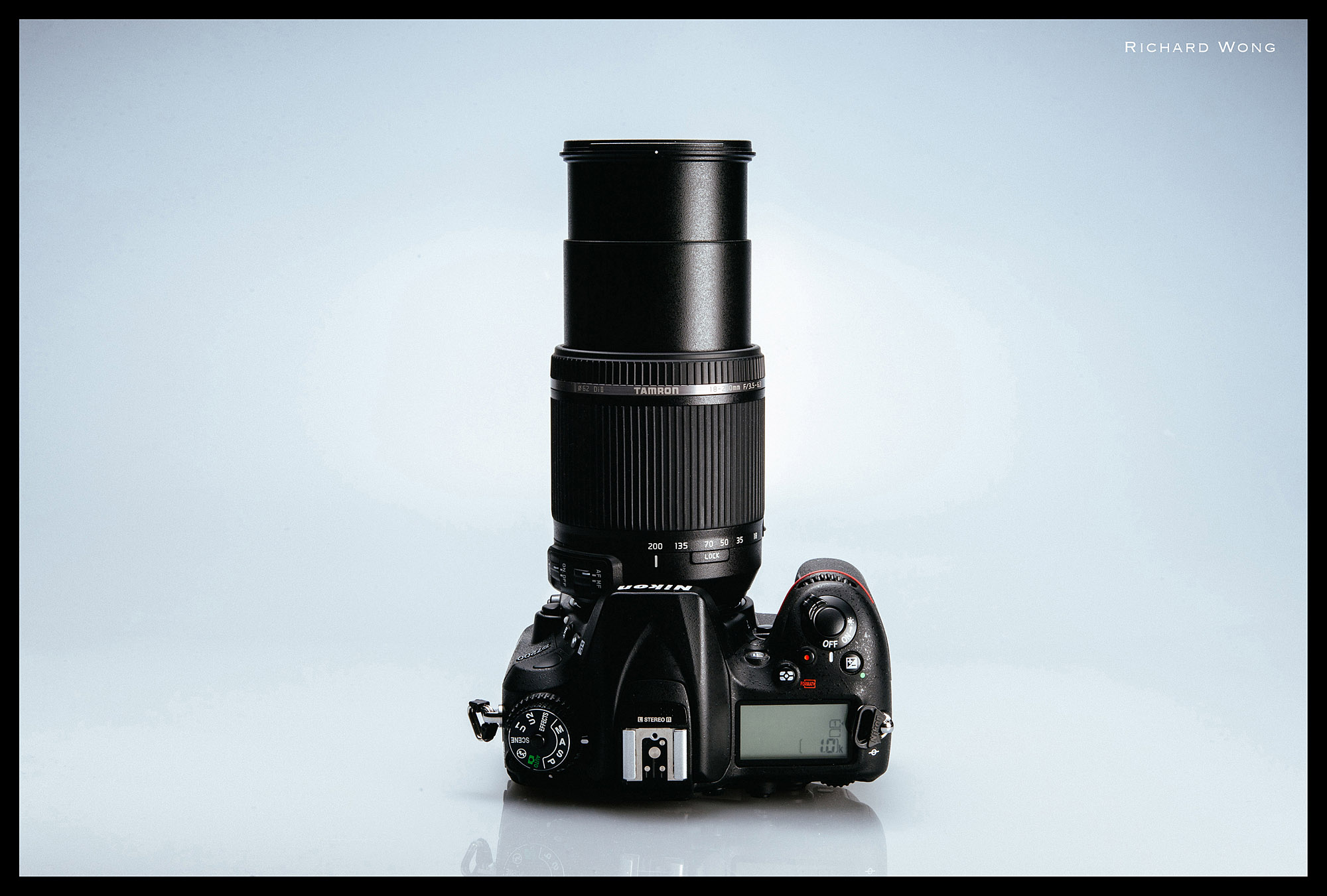 Apart from the VC and AF/MF switches, there is a zoom lock on the lens. I’ve never notice any zoom creep when walking around with this lens so you probably don’t need to use the lock at all.

Autofocus operation is quiet and smooth. Focusing speed is reasonably fast and I have pretty good success rate when tracking moving objects using the Nikon D7200 (which does have a very good autofocus system). However, with the maximum aperture being only f/6.3 at the tele end, it does need quite a bit of ambient light to make sure the autofocus can work properly. 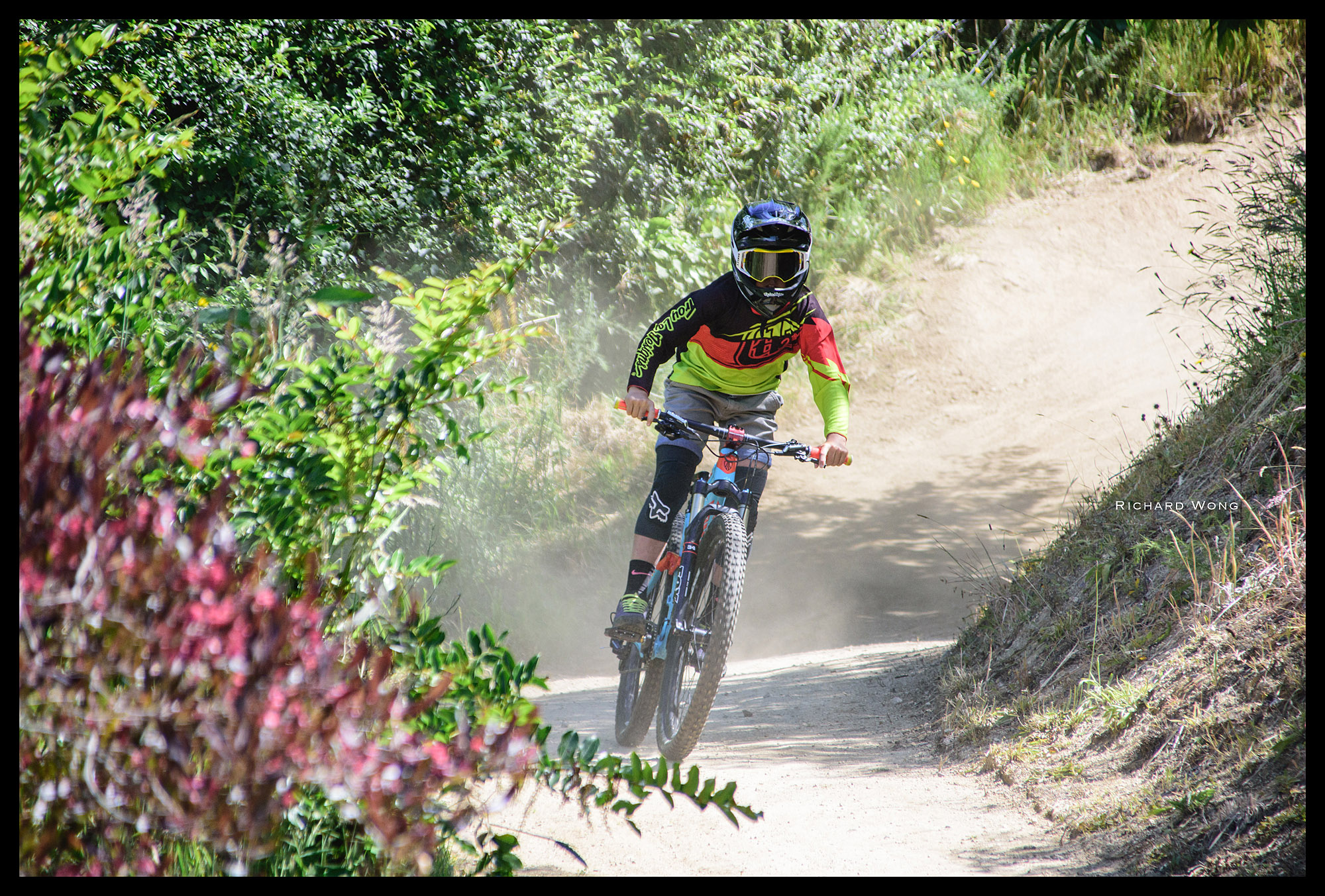 One thing I don’t really like is that the focus ring at the front of the lens rotates when the autofocus system is working. So you have to make sure you don’t hold the focus ring when you activate autofocus. A bit annoying, but not really a biggie as you will get used to it very soon.
To test how effective the lens’ image stabiliser is, I took over 200 photos at various shutter speed, and examined how sharp each photo is and divided them into three groups. The purpose of this test is not to determine what is the absolute slowest shutter speed I can shoot at with this lens, the main purpose is to see how effective the image stabiliser is for improving the success rate when the same person is shooting under same condition. But anyway, the chart below summarised my results. And as you can see, B018’s VC is around 2 stops effective. While this may not be the most effective image stabiliser, 2 stops mean you can shoot at 4 times slower shutter speed so it is still a lot better than not having any image stabiliser at all. 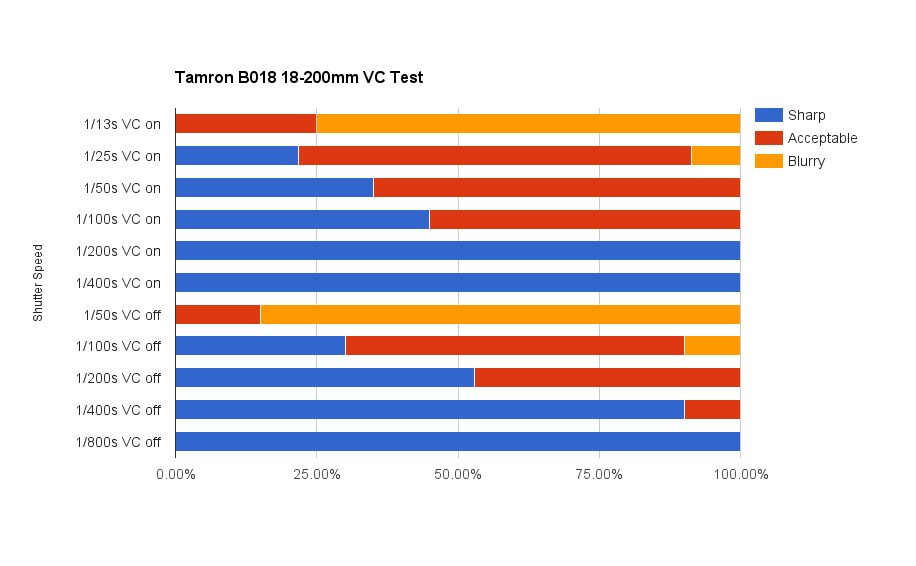 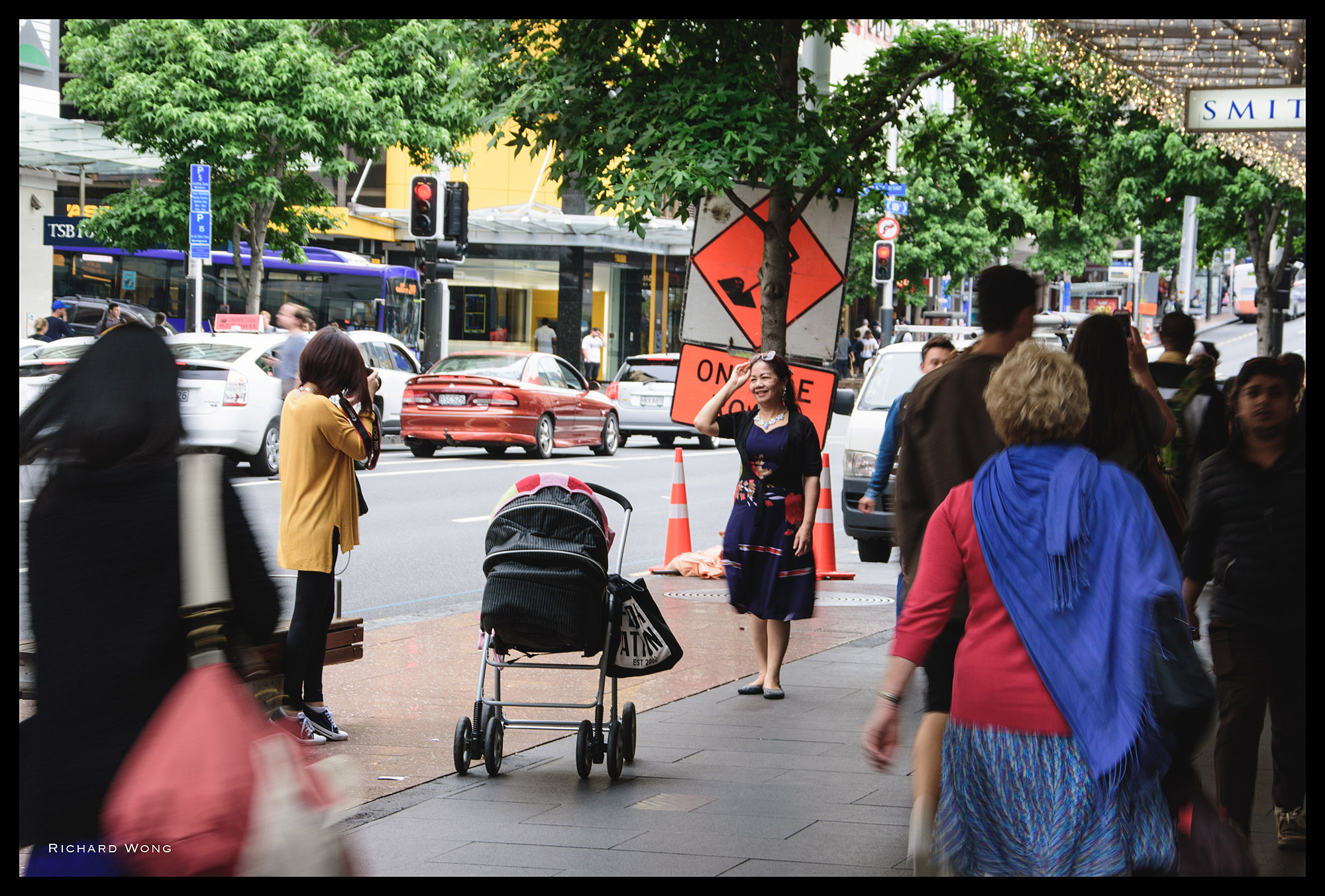 Next, let’s look at the image quality. And let me start with the bad news first.
The biggest issue I found with the B018 is the barrel distortion. At some focal length, mostly near the wide end, the barrel distortion is really obvious. What makes it worse is that the distortion is could also be quite irregular so you can’t completely remove the barrel distortion in post processing either. So if you are someone who want the horizontal and vertical lines to be perfectly straight in your photos, this is definitely not the lens you are looking for.
But to be fair, the B018 is not the only superzoom lens that suffers from severe barrel distortion. Pretty much every super zoom lens I’ve used have this problem, it’s just some are slightly better than other. This is one of the price you have to pay when you want one lens to handle a very wide focal range. 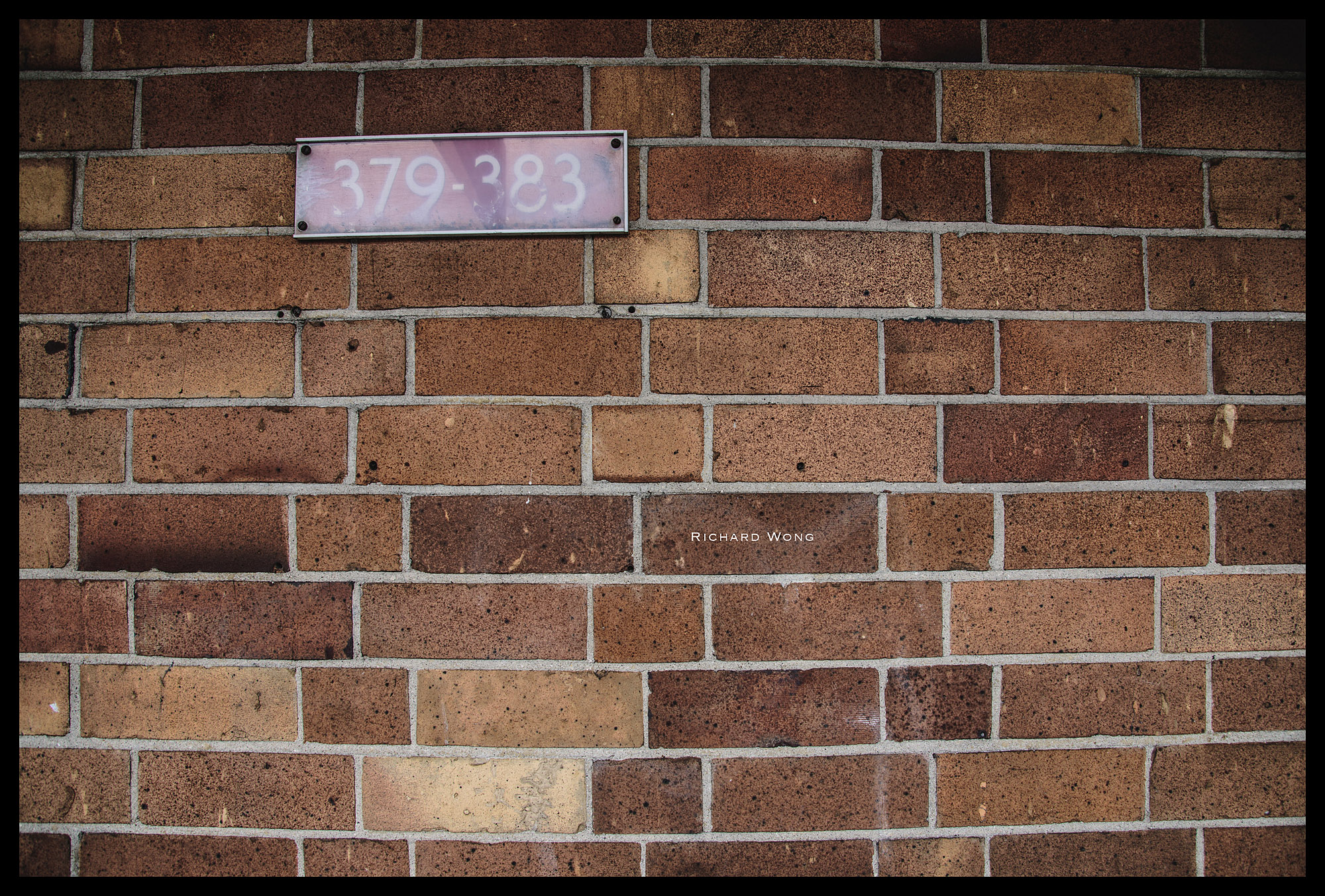 Vignetting control could also be better, especially the tele end. Look at the photo below, shot at 200mm at maximum aperture f/6.3, the dark corners are quite obvious. It’s not terrible, but definitely noticeable. But notice this photo has a very simple, single colour background which reveals vignetting very clearly. For most everyday photos, vignetting would be less noticeable. 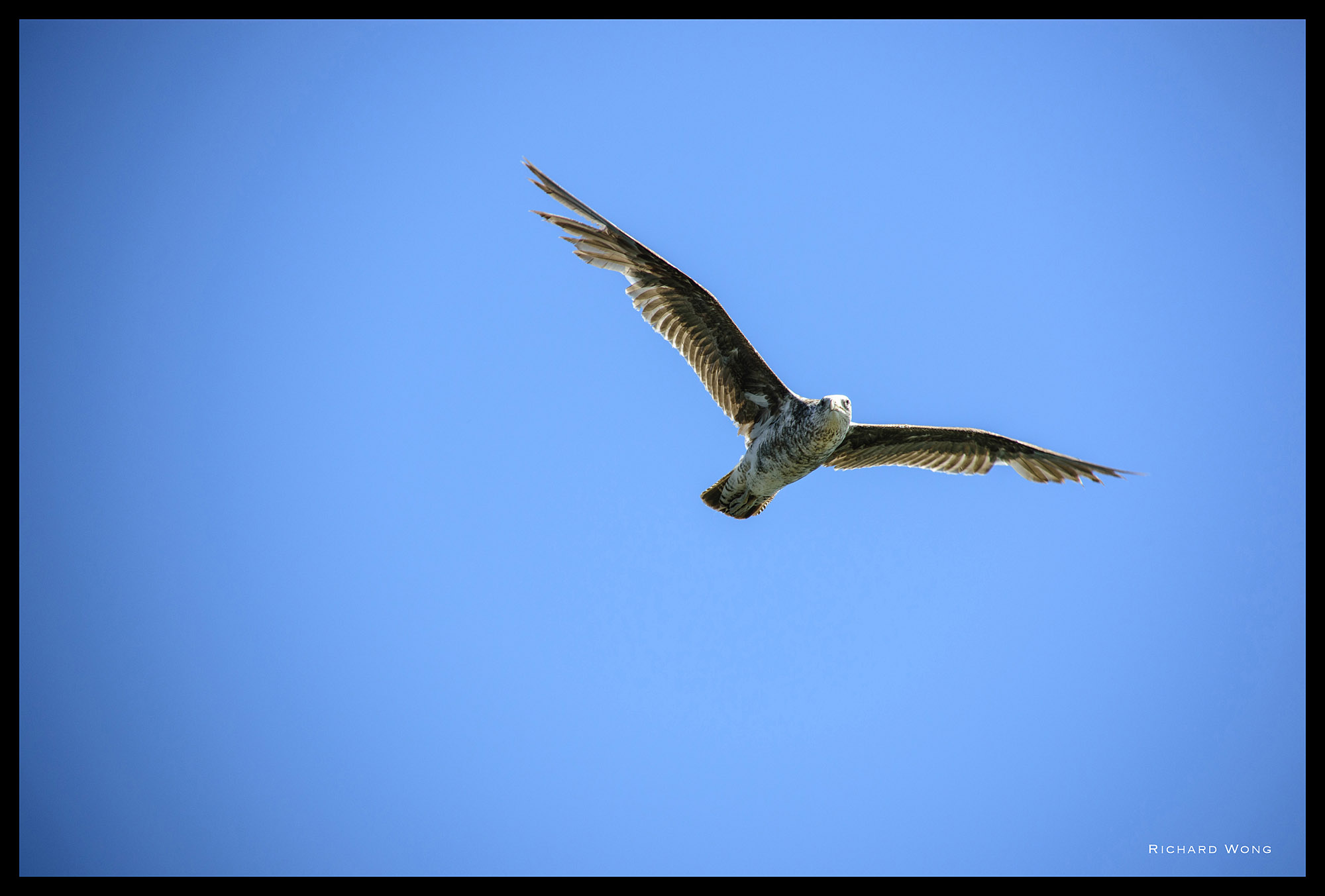 Luckily, vignetting and barrel distortion are the only two things I want to complain about. So let’s move on to the good things.
Sharpness is surprisingly good. I won’t say the pictures are tack sharp, as it isn’t. But even when shot at wide open, the sharpness is still pretty good, have a look at  the 100% crops below that was taken at 200mm at f/6.3. Even the corner crop isn’t too bad. Consider this is an entry level 10x superzoom lens, I would say the sharpness is a lot better than expected. And with the VC, I could afford to stop down slightly to improve the sharpness. 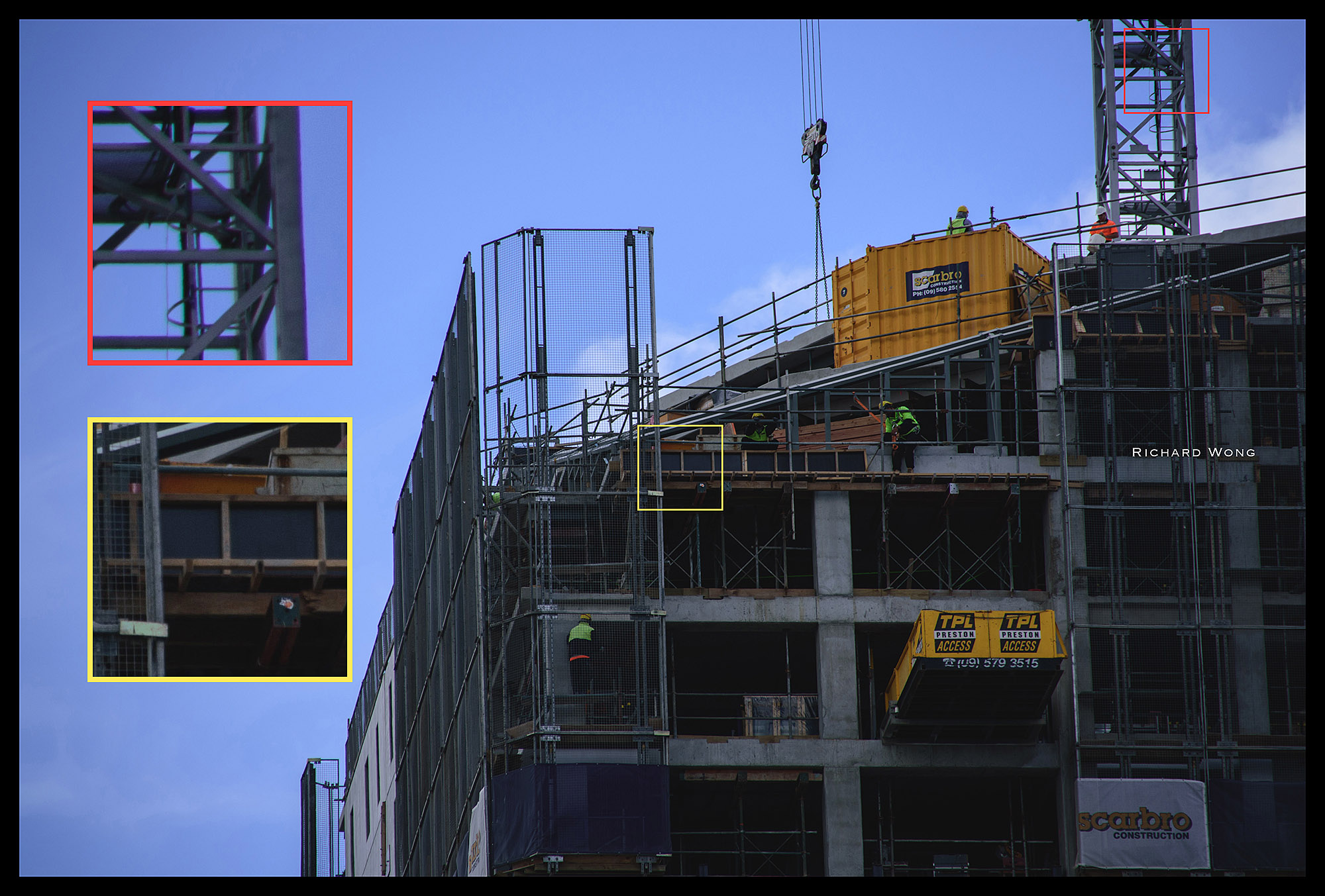 Being a slow-ish zoom lens, the 18-200mm f/3.5-6.3 VC is obviously not designed to be a bokeh monster. Having said that, bokeh from the B018 is quite round and smooth, and without too much nervous highlight around the edge. 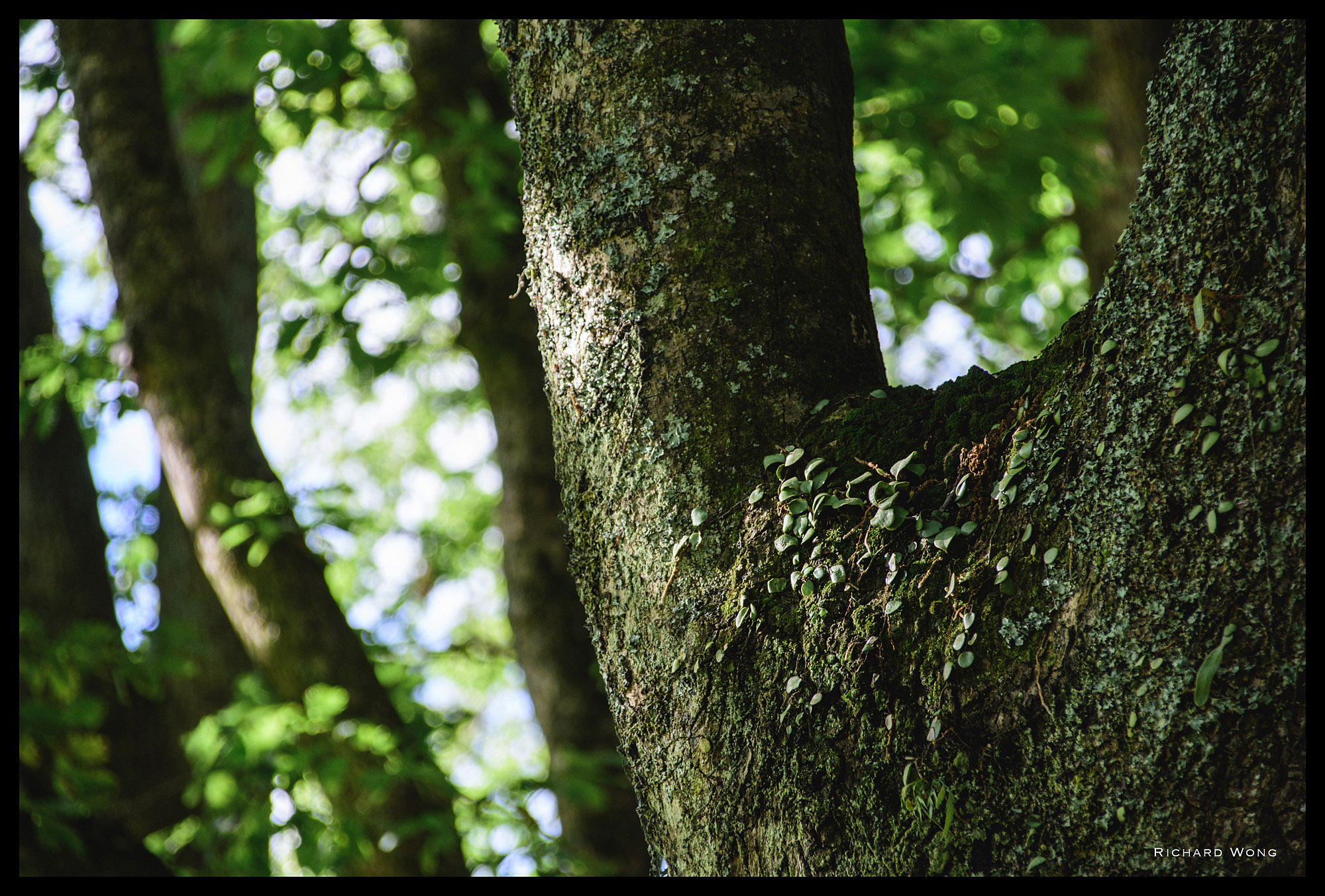 Tamron didn’t state if they have used any special coating on the B018, but overall, the lens’ flare resistance is pretty good. There could be a bit of lens flare when you have a strong light source in front of the camera, but it is never very bad and contrast remains quite good. The lens comes with a petal shaped lens hood which helps minimise flare and also provides protection against physical damage.
Chromatic aberration is also quite well controlled. I don’t really see much colour fringing in my photos and when I see it, they could be easily removable in postprocessing. 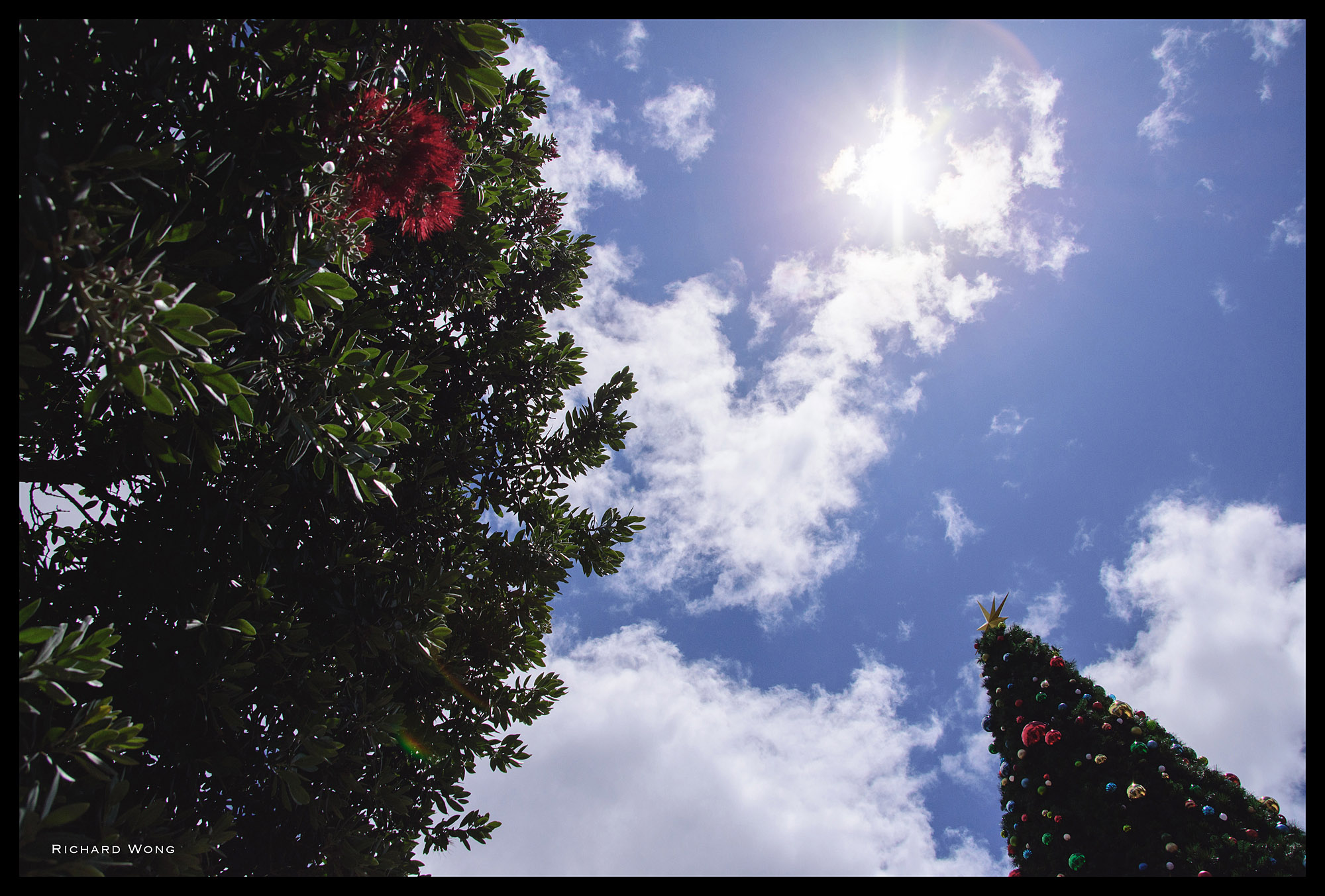 The Tamron 18-200mm f/3.5-6.3 Di II VC’s optical quality is pretty good, but not perfect as it does have a few notable flaws. But nobody should buy a superzoom lens if you want flawless image quality, that’s what prime lenses are for. Superzoom lens’ job is to cover a wide range of focal length and ideally not sacrificing too much image quality so you don’t have to carry multiple lenses. I think the new Tamron 18-200 delivers exactly that and probably a little bit more. The additional of VC is definitely the most important changes compares to the original version as it widens up the shooting envelope dramatically. While the slow aperture still limits the autofocus ability under low light, at least you could handheld the camera and shoot at much slower shutter speed without introducing camera blur. 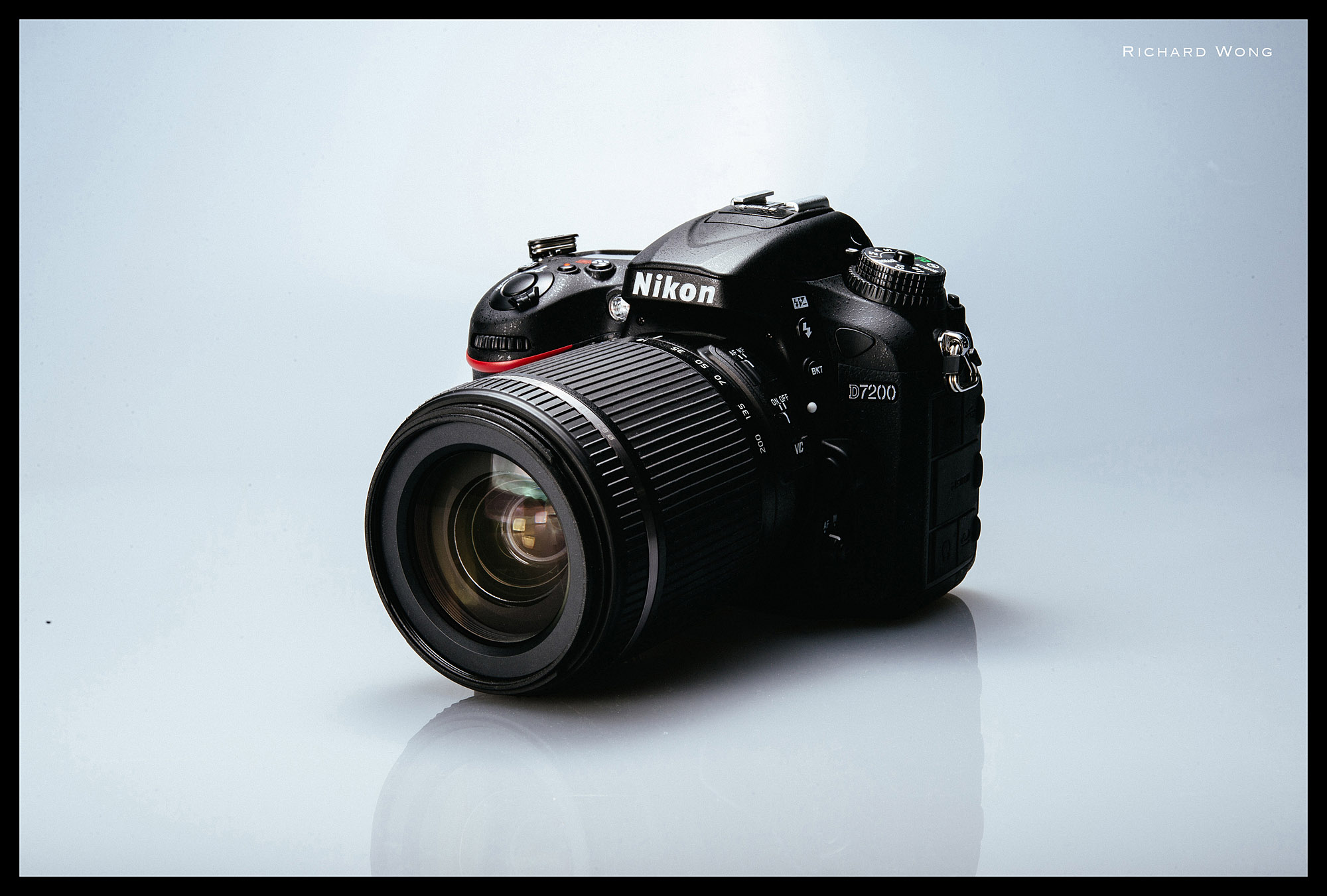 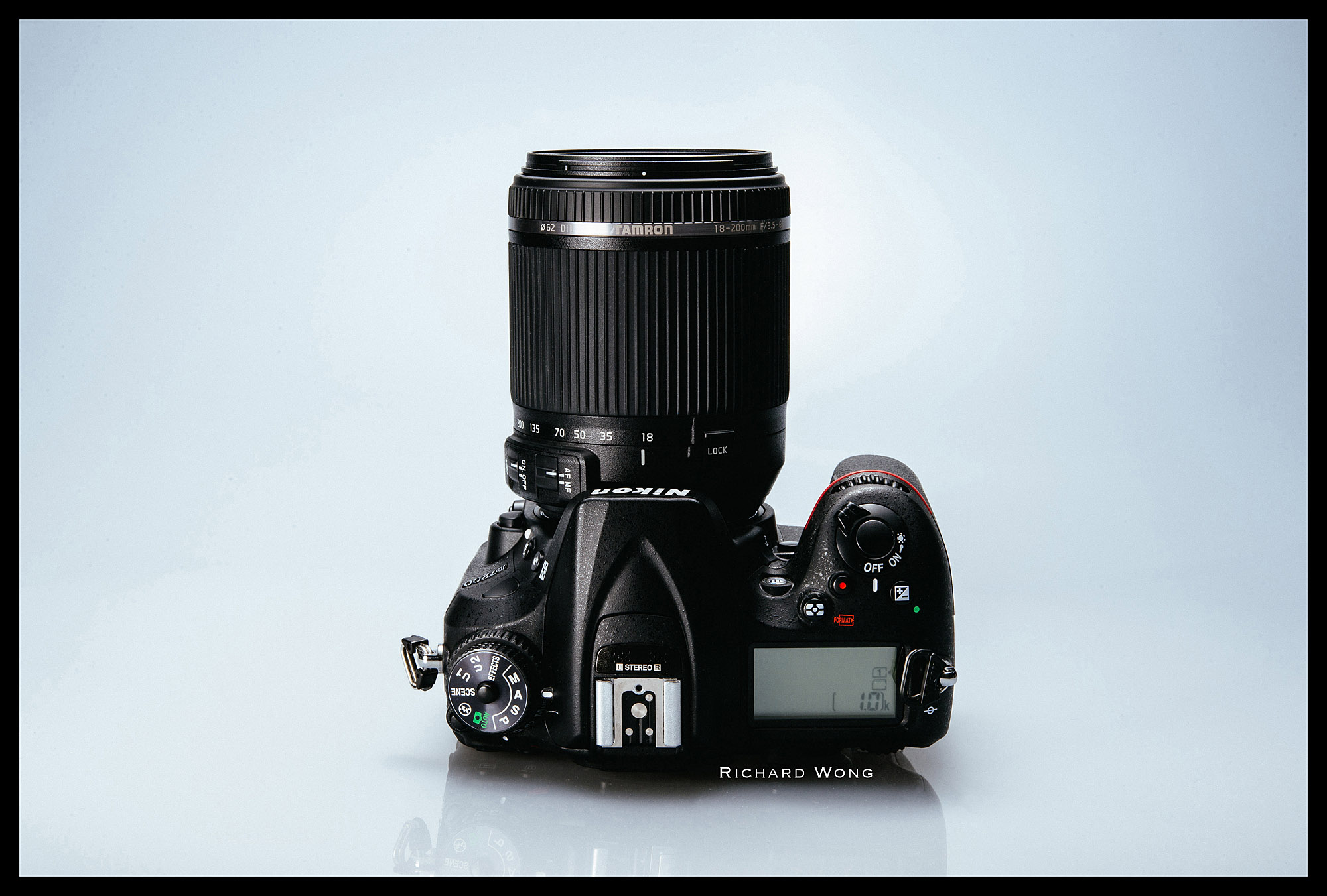 I can see the Tamron 18-200mm VC being a very attractive alternative to the typical 18-55mm + 55-200mm twin kit lenses setup. The Tamron would give you more barrel distortion, but other than that I don’t really think the Tamron B018’s image quality is noticeably worse than most twin lenses setup. The Tamron also weighs less and is smaller than any 18-55 + 55-200 combo added together. And the fact that you don’t need to carry the additional lens or swap lenses between shots really makes the Tamron the more sensible choice for most people. Not to mention the price of the B018 is actually cheaper than the price of two kit lenses combined.

Sometimes, the best tool does not necessarily have to be perfect. The Tamron 18-200mm F/3.5-6.3 Di II VC is a perfect example that a cheap and plastic lens with some pretty noticeable optical flaws can still be a very good lens.

Richard is a multi-award winning wedding/portrait photographer based in Auckland, New Zealand.  Richard’s website is www.photobyrichard.com and his facebook page is https://www.facebook.com/PhotoByRichard. Richard is also a contributing writer for a few photography magazines.
Do you like my reviews? Follow me on facebook! 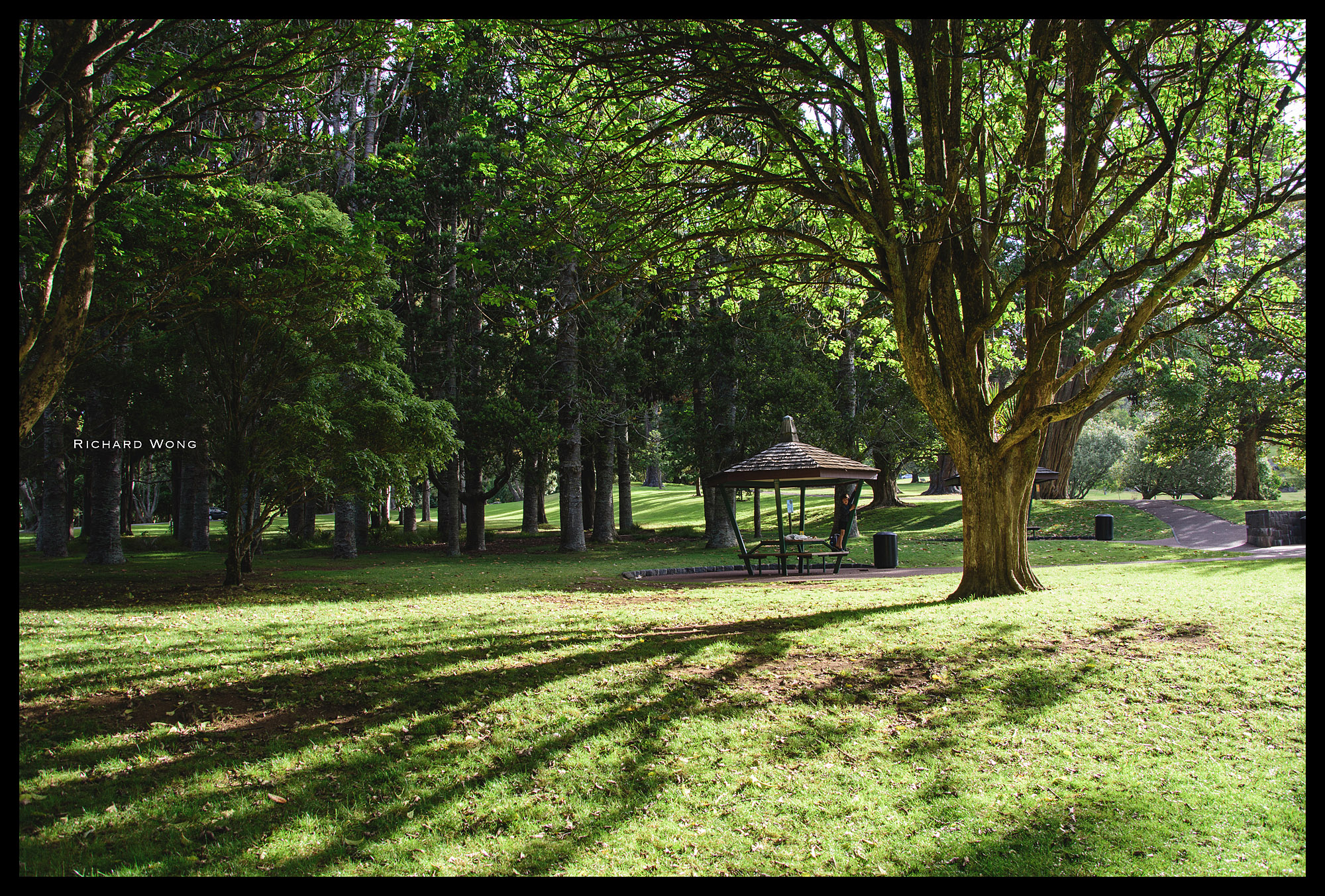 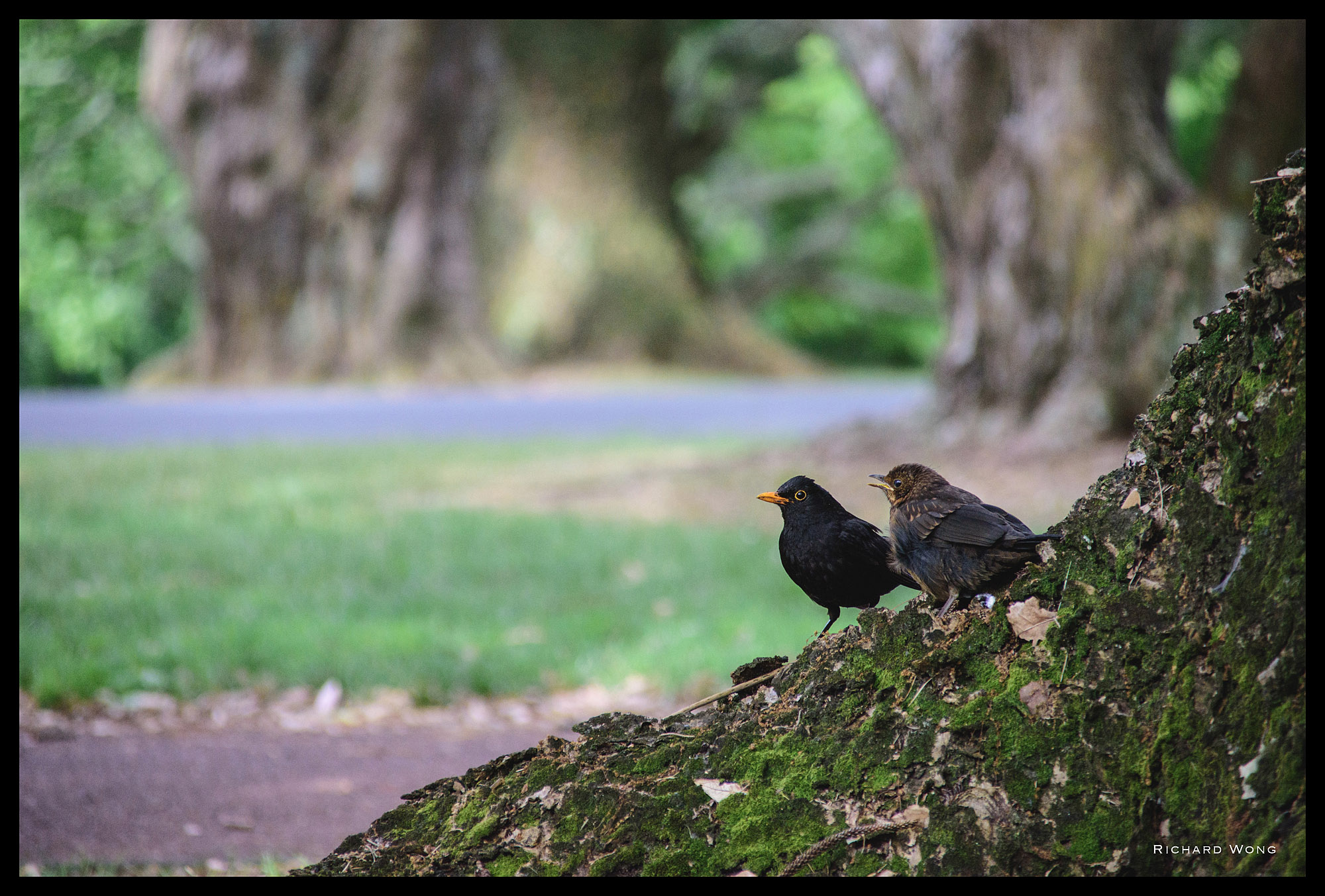 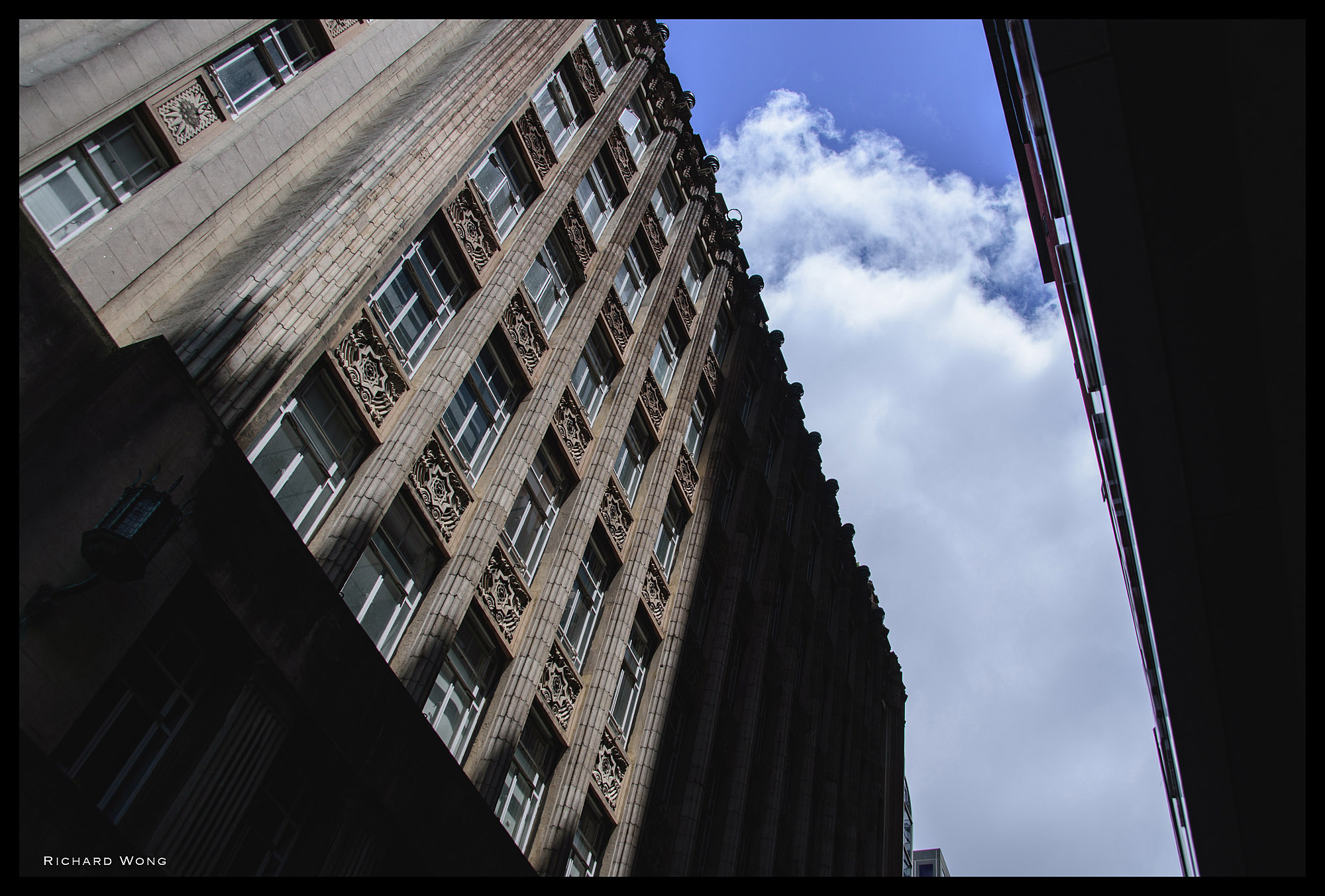 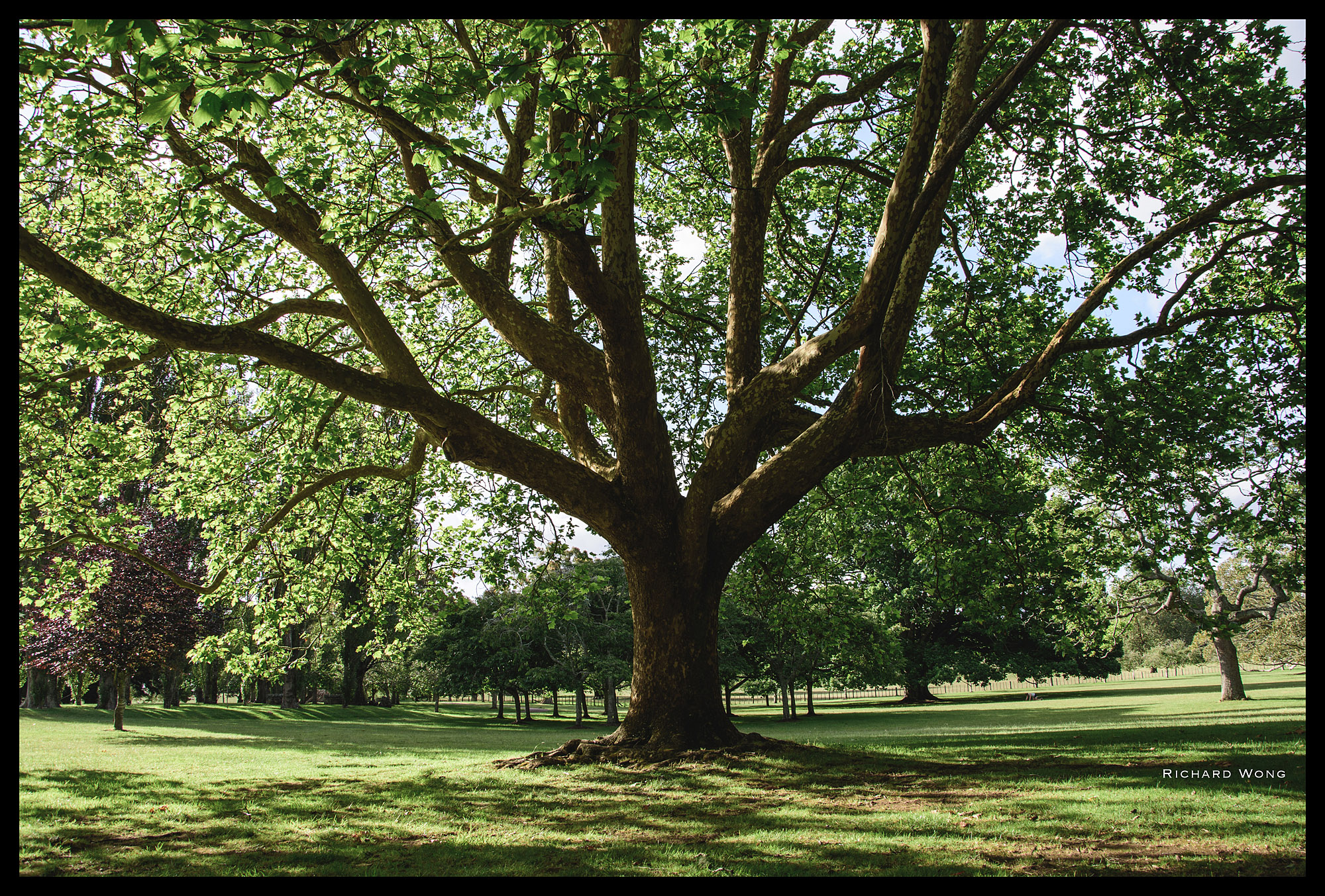 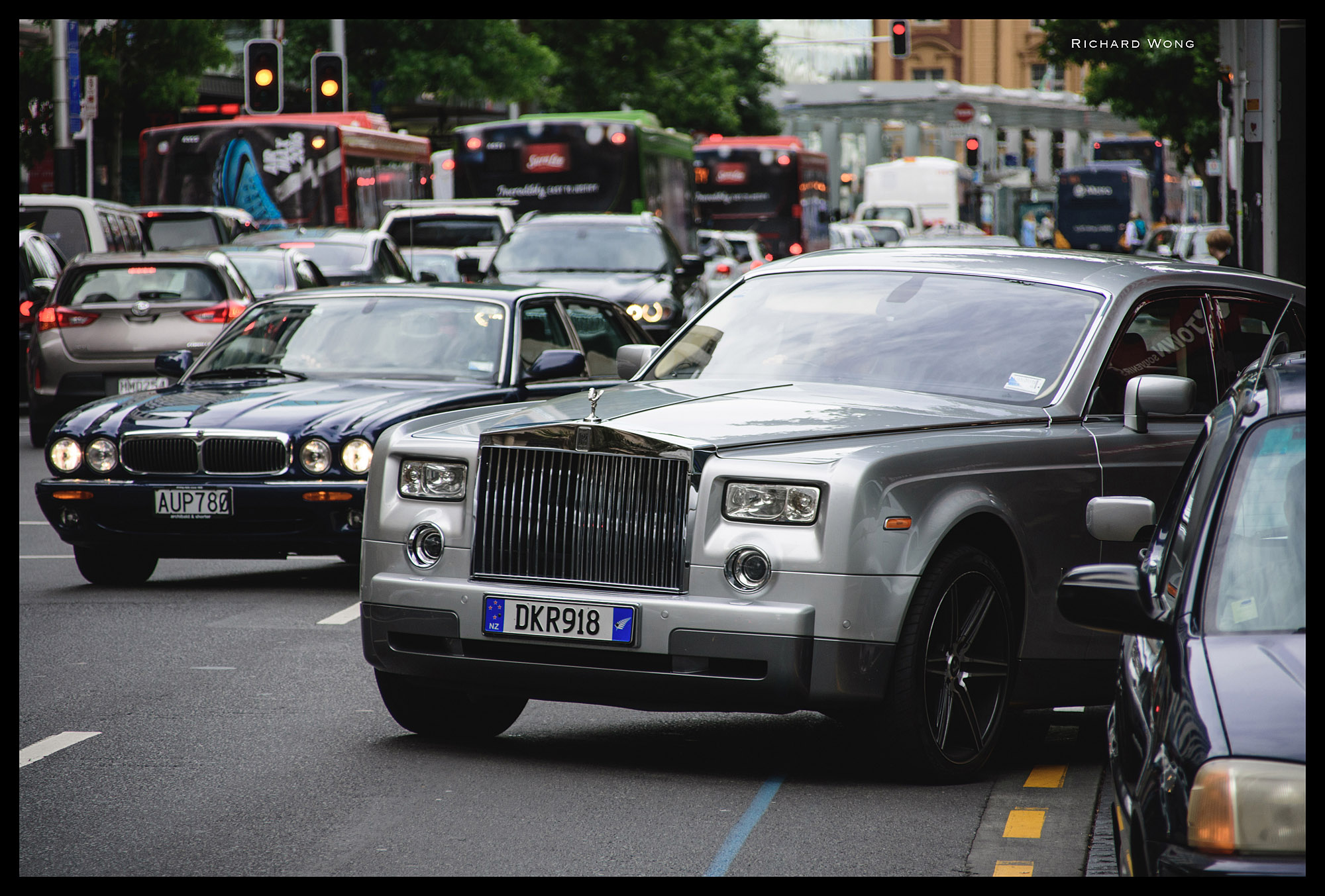 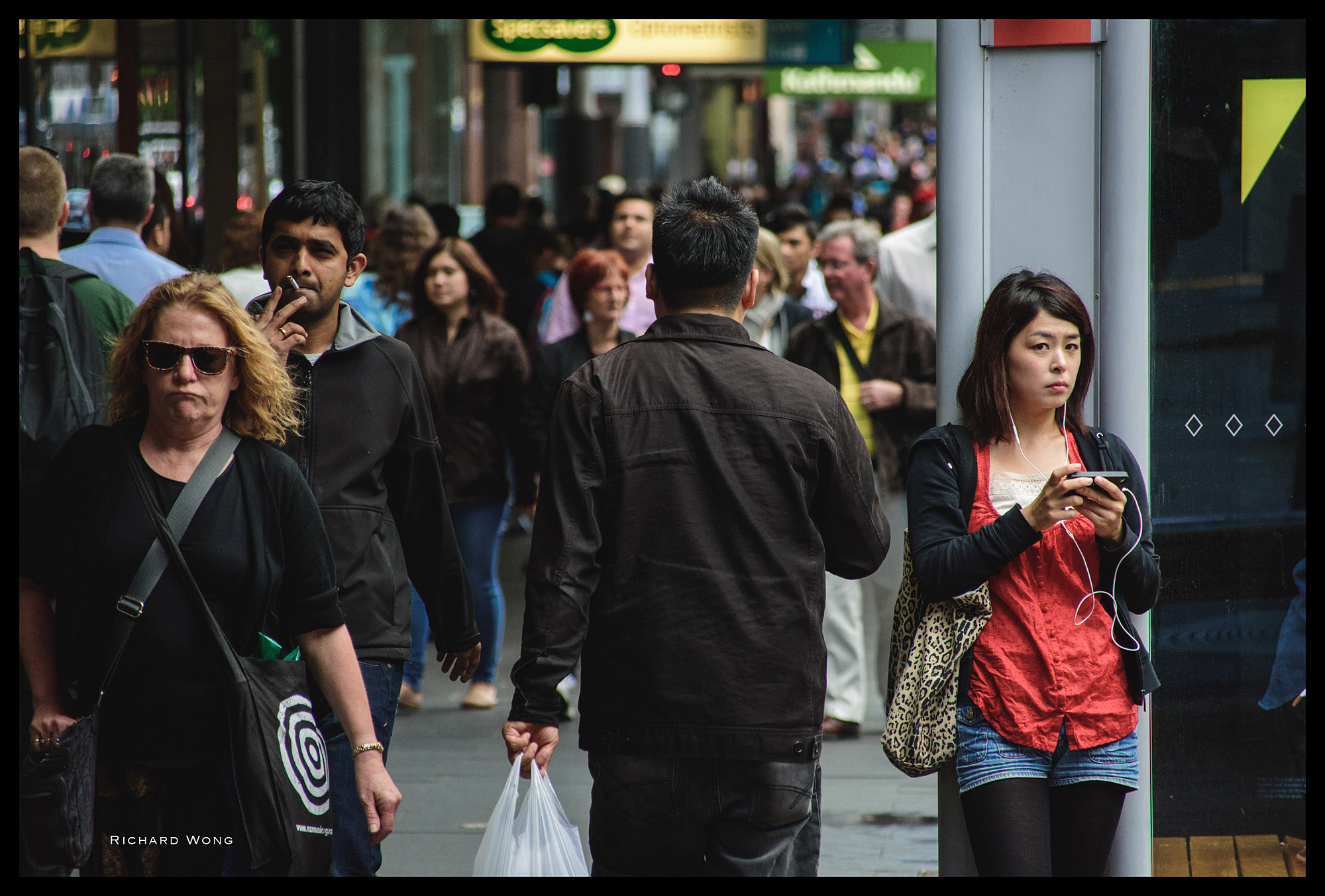 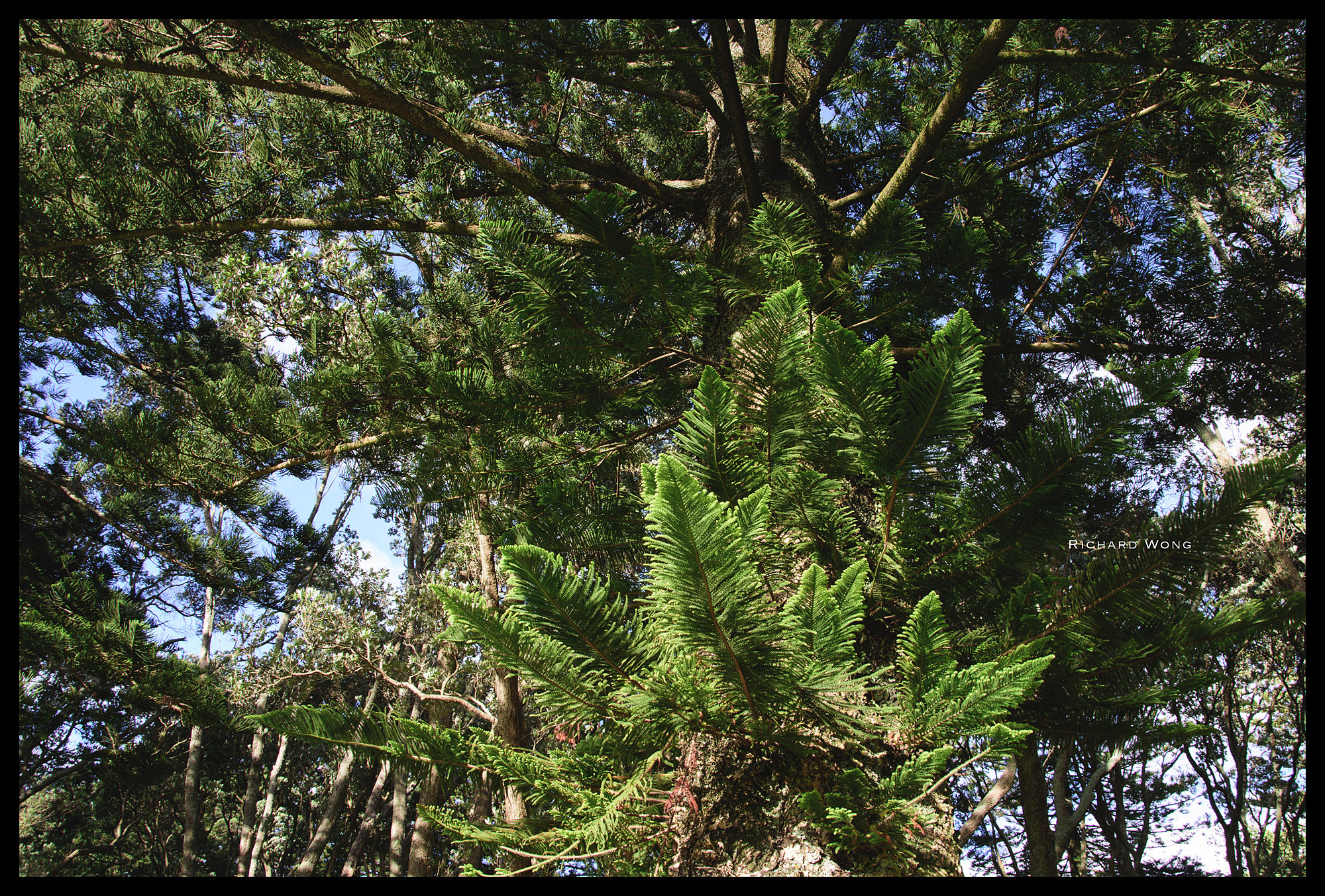 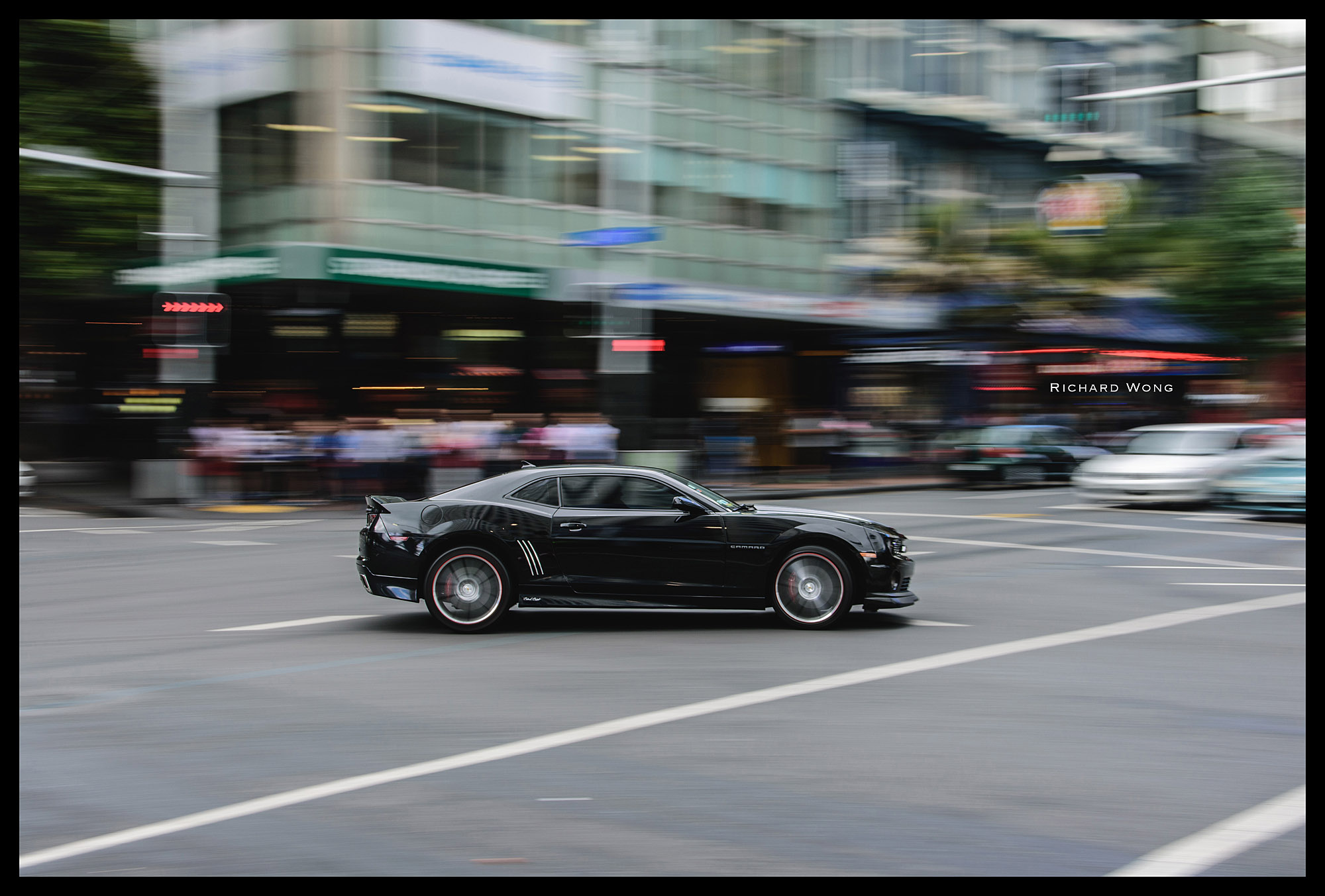 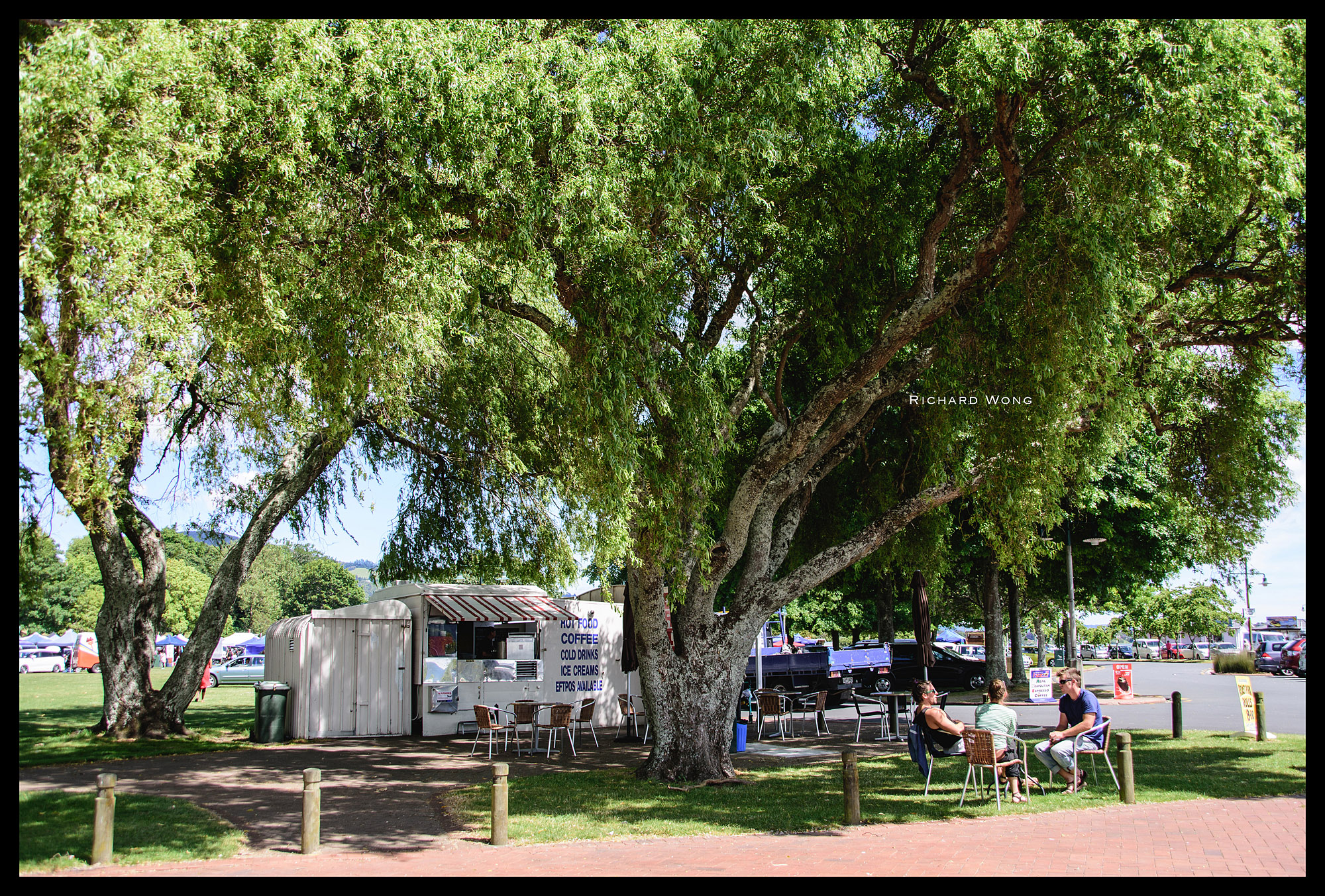 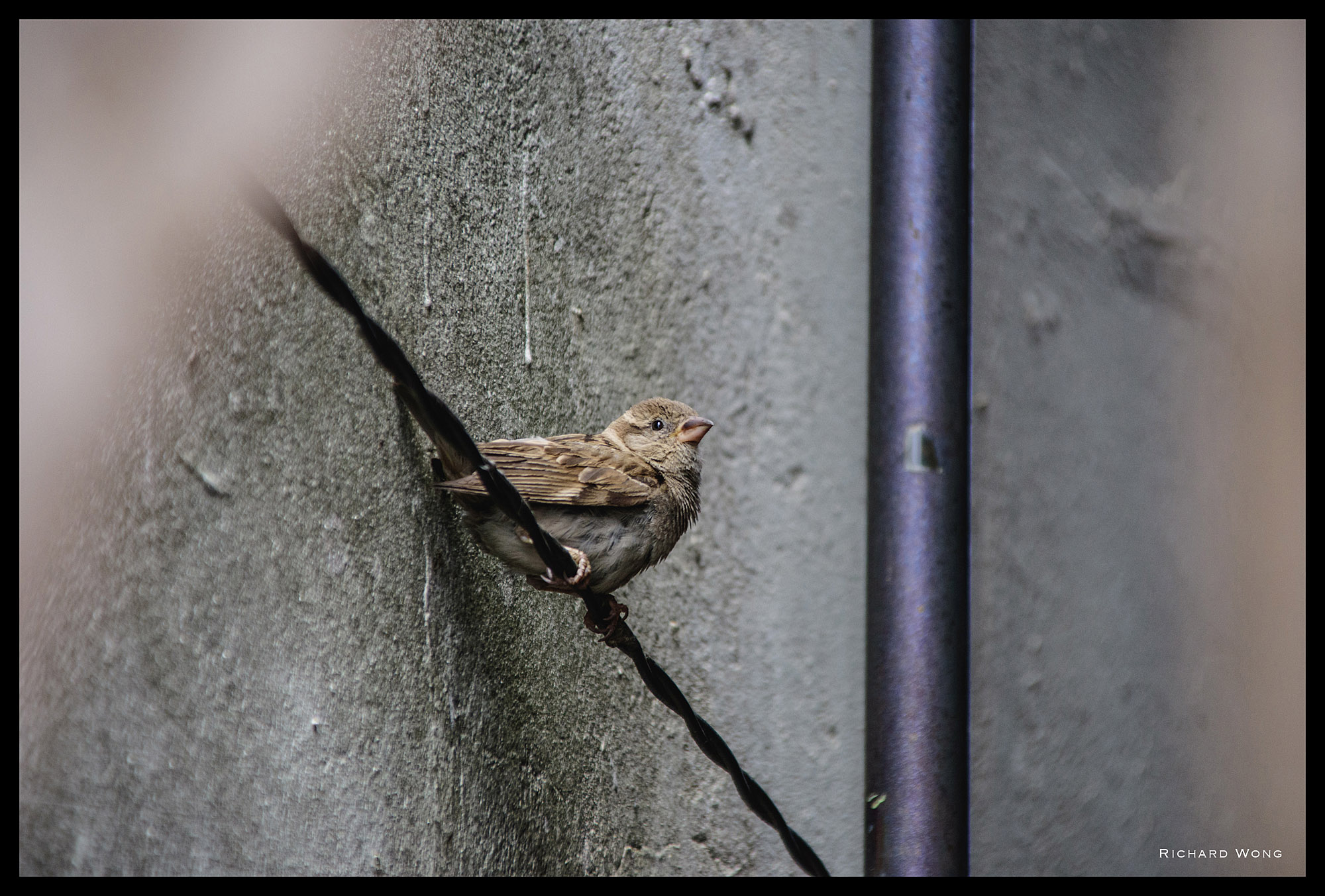 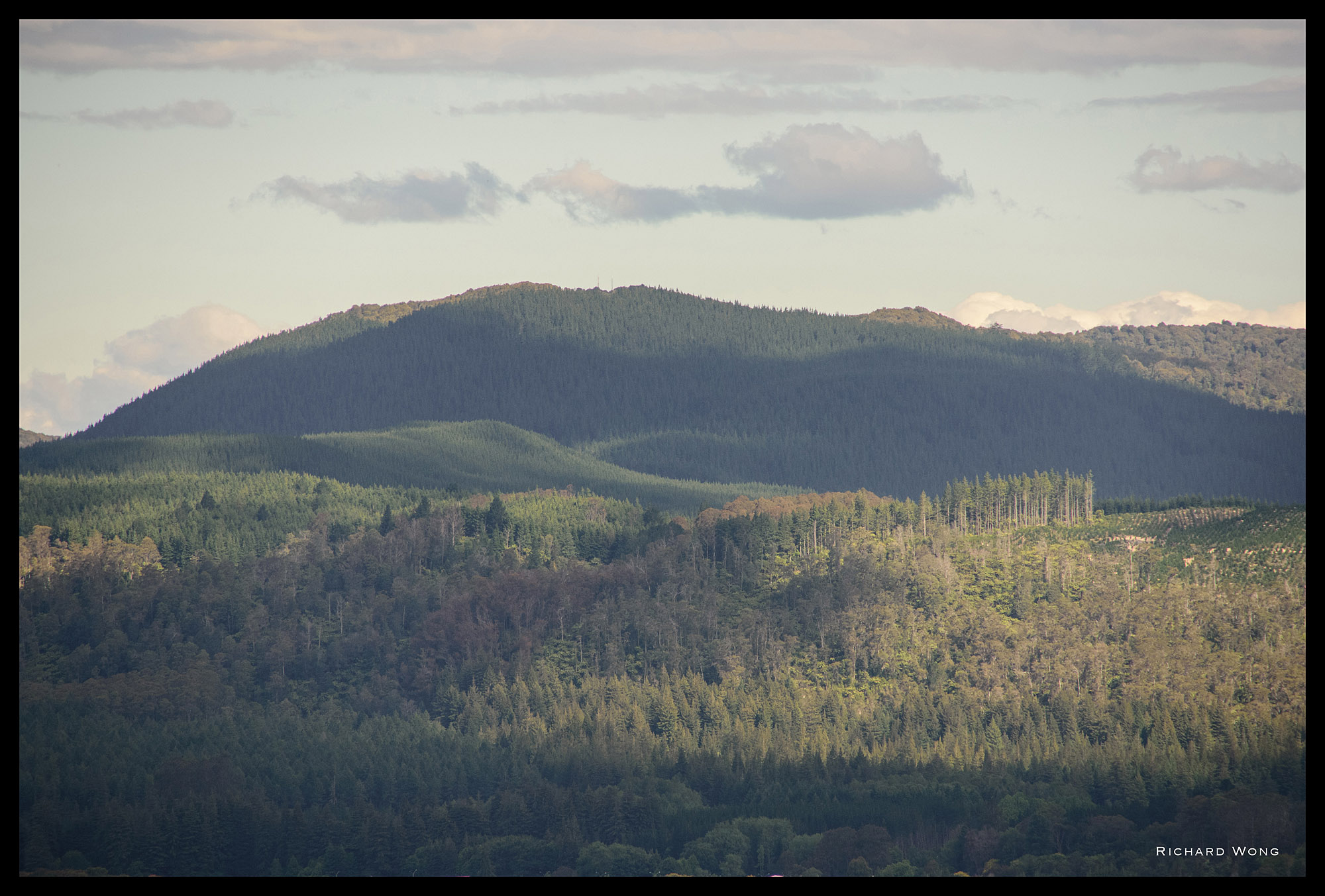