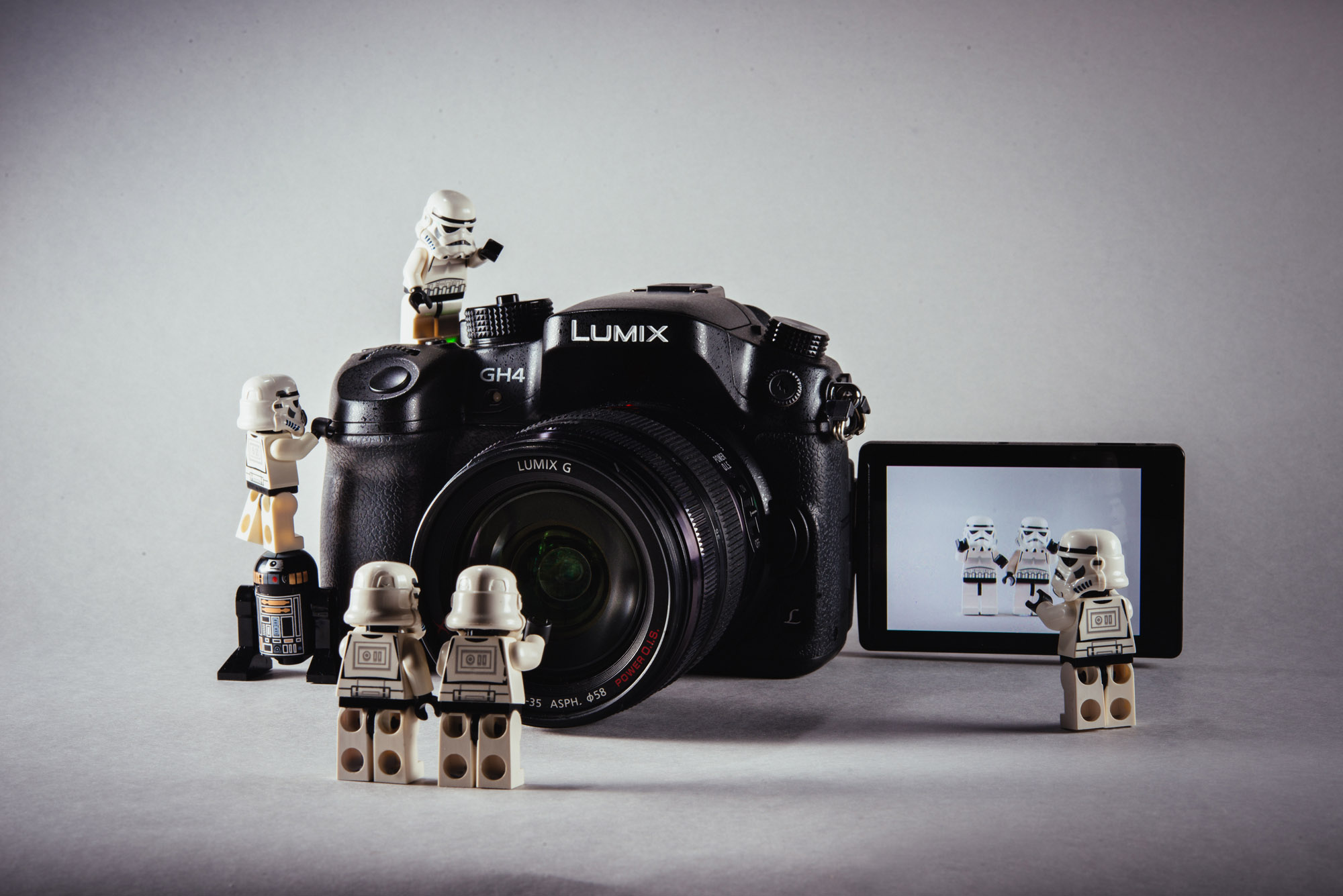 As a wedding photographer, I’ve worked with a lot of videographers. One of the most popular camera my videographer friends use is the Panasonic GH3. The small size, excellent video quality and affordable price make the GH3 an excellent choice for anyone who wants to capture high quality video and does not want to break his back or bank. Now the Panasonic GH4 has just arrived. It follows the exact same formula as the GH3. A DSLR style camera and heavily video oriented design. And comes with many improvements over it’s predecessor.

I’m not really a videographer, so I would like to review this camera mainly from a photographer’s point of view and also look at the general design of the camera. 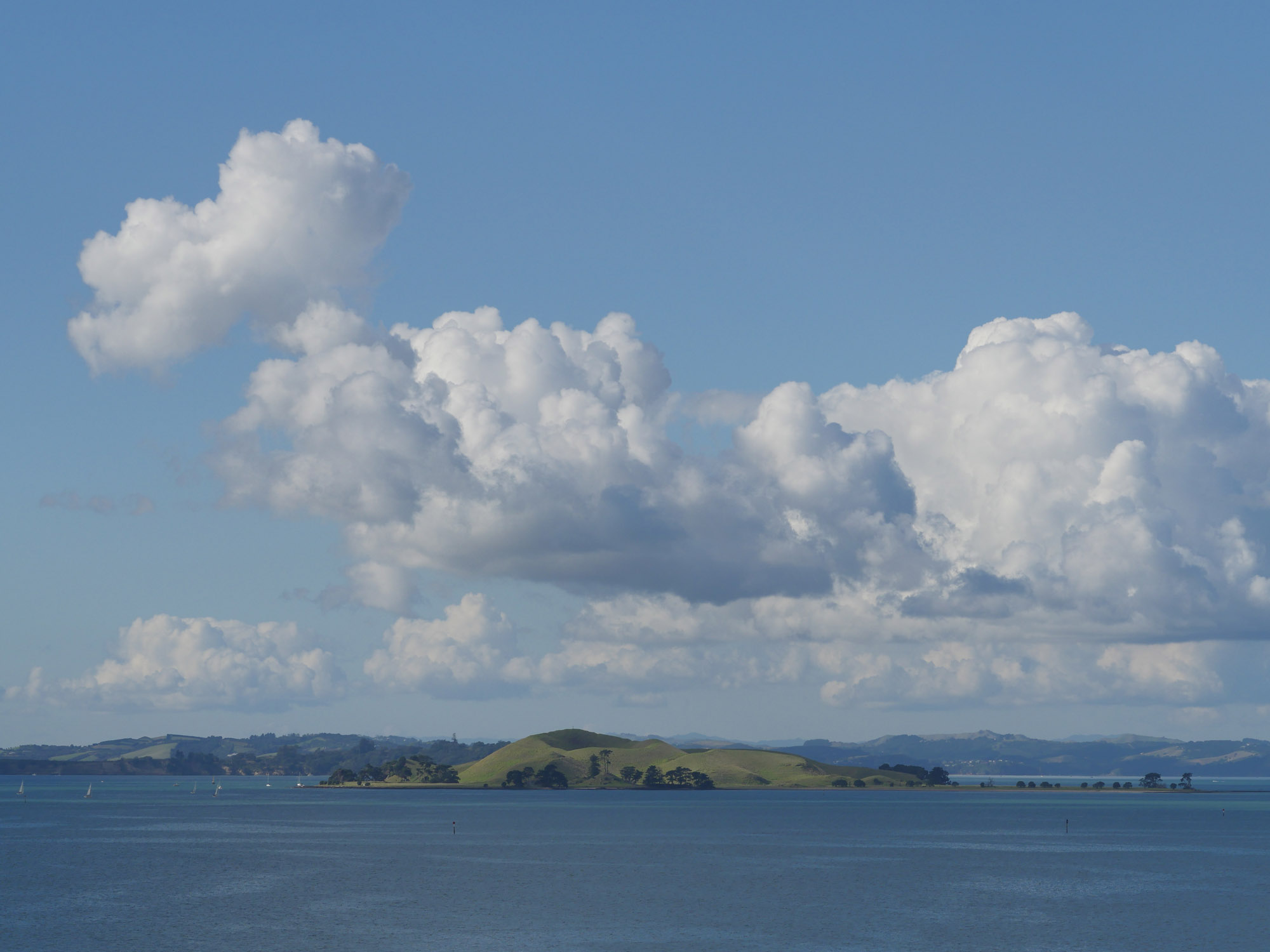 If you put a GH4 and a GH3 next to each other, apart from the obvious GH3/GH4 logo difference, the two cameras look very very similar. The buttons layout, the menu system, the position of various controls are almost identical to the GH3. This is probably a good thing for GH3 users wanting to upgrade to the latest and greatest. Like the GH3, all the buttons and controls are positioned logically.  Using only one hand to operate the camera is not a problem as most of the controls are located on the right side of the camera. There are always many customisable buttons on the camera. And while I do feel some of the menus could be rearranged a bit better, the user interface works quite well. Compare to most other DSLR/Mirrorless cameras, there are more video settings and Panasonic sees the video settings are just important as the photo settings. 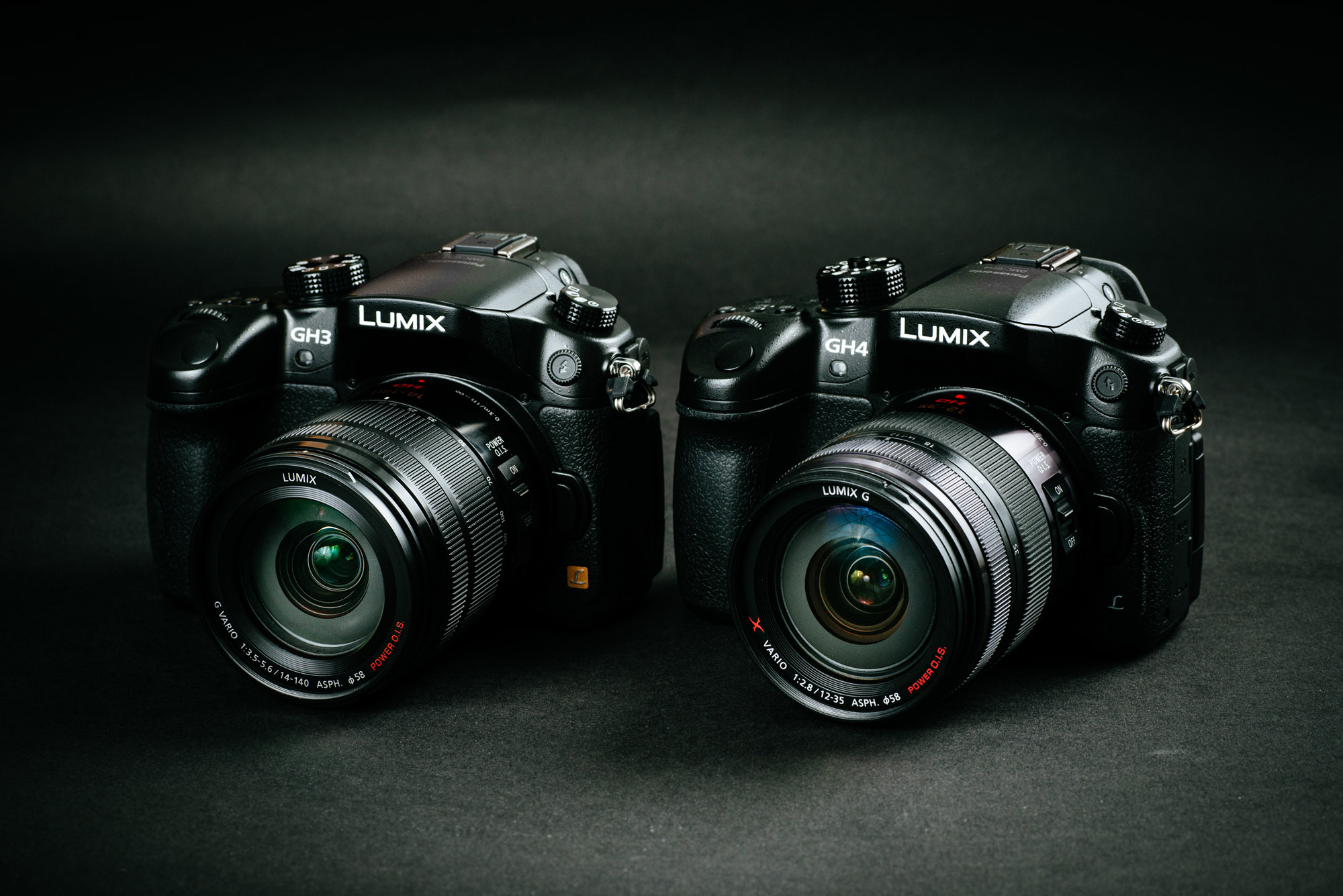 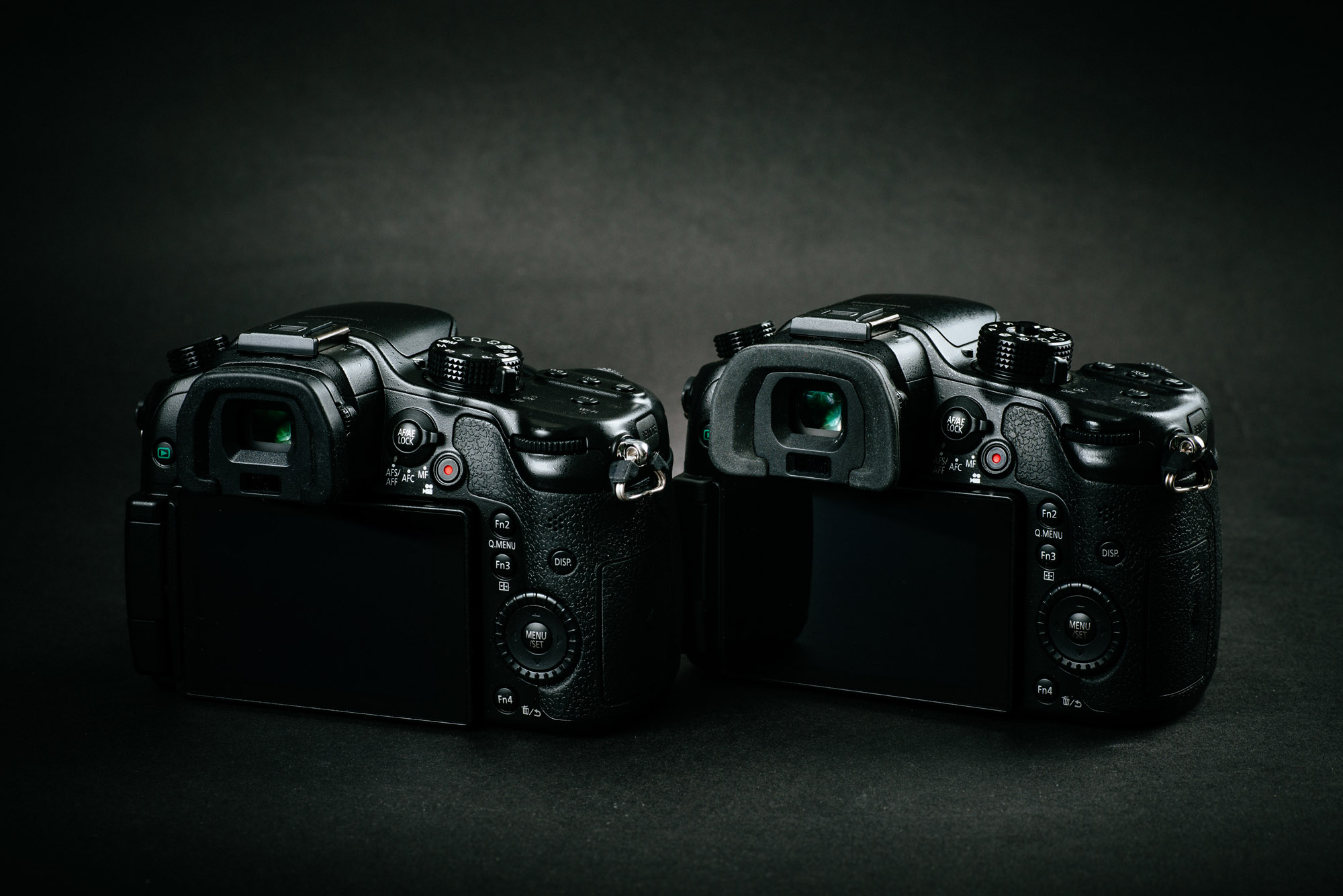 As one of the largest micro four thirds camera, the GH4 is still significantly smaller and lighter than any DSLR. The camera’s full size grip makes holding the camera very comfortable and secure. The build quality is very good and definitely doesn’t feel plasticky at all! GH4 is a mirrorless camera and therefore doesn’t have an optical viewfinder. Instead it has a built-in electronic viewfinder (EVF), and I can tell you the EVF is fantastic!

Not only the EVF is large and  high resolution, colours are accurate and there is virtually no lag. This is the first time I somehow feel looking through the EVF is almost like looking through an optical viewfinder. I don’t feel like I’m looking at a computer display anymore. Normally one of the biggest problem with EVF is that the refresh rate drops significantly and become very noisy when the scene is dark. But I’m glad to say that the GH4 doesn’t seem to suffer too much in this area. The EVF is very usable under most lighting condition. 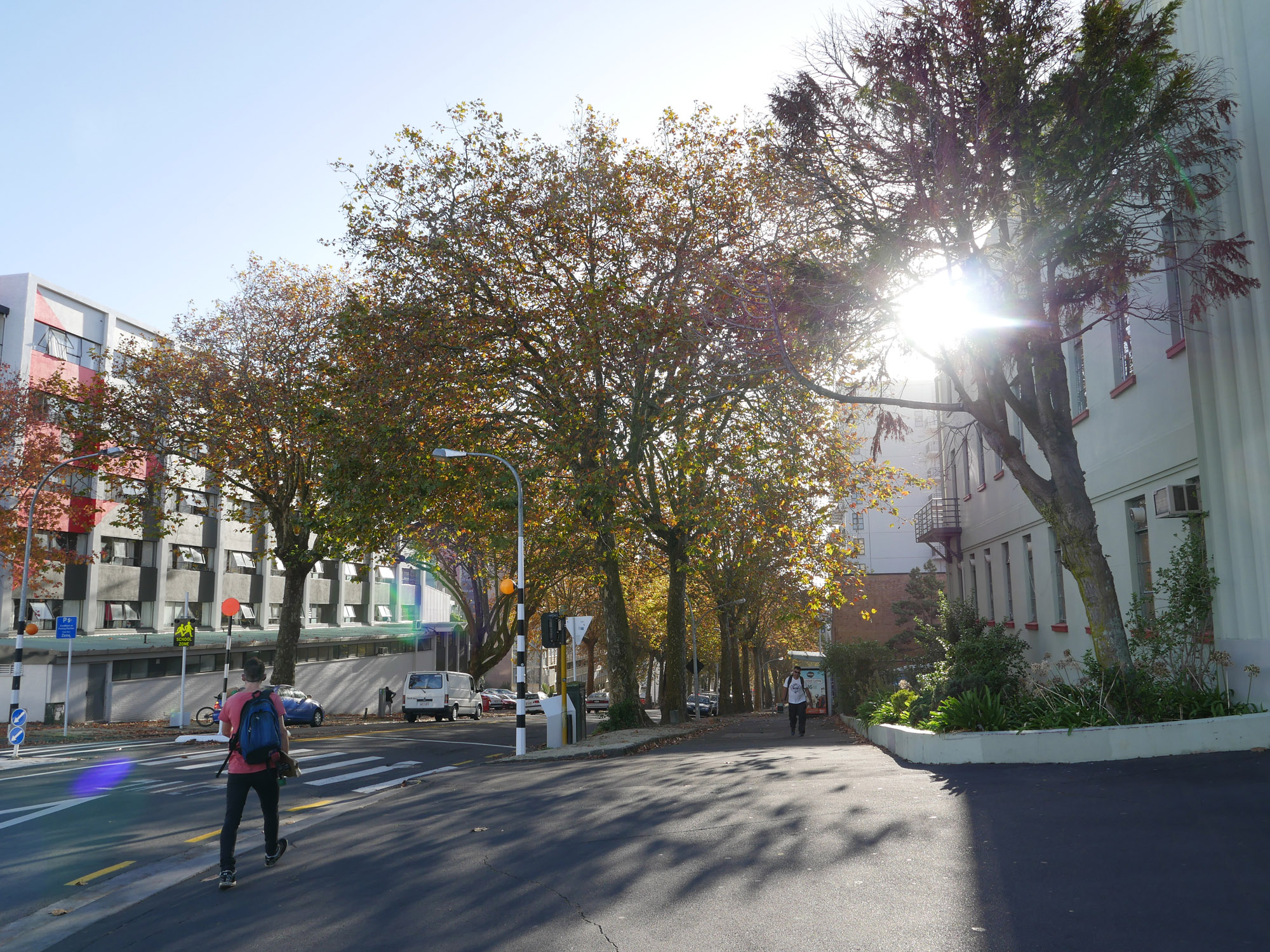 The OLED LCD screen is pretty big, high resolution and bright. It’s also a touchscreen and is very responsive. Just like the GX7 or GH3, the LCD touchscreen can also be used as a track pad to control the autofocus point when you shooting using the EVF. this is turned off by default but everyone really should turn it on

The GH4’s image sensor is a new 16MP LiveMOS sensor. The processor has also been upgraded to the quad CPU Venus (IX) Engine. It was not too long ago when we were all  impressed how the Nikon D3 can do ISO25600, now the GH4 with a sensor that is only 25% as large as a full frame D3 can go up to same ISO too.

When I was reviewing the Panasonic GX7, I was really quite impressed by it’s image quality and thought there isn’t too much difference between the photos from the GX7 and most APS-C cameras.. The pictures from the GH4 didn’t disappoint me as well. Good dynamic range, nice colours and decent high ISO performance.  Comparing JPGs straight out of camera, GH4’s high ISO performance is roughly half a stop better than the GH3. Adobe still hasn’t support GH4’s RAW when writing this review, and i’m really not a big fan of the included Silkpix software. So all the GH4 sample photos are just unedited JPGs straight out of the camera. 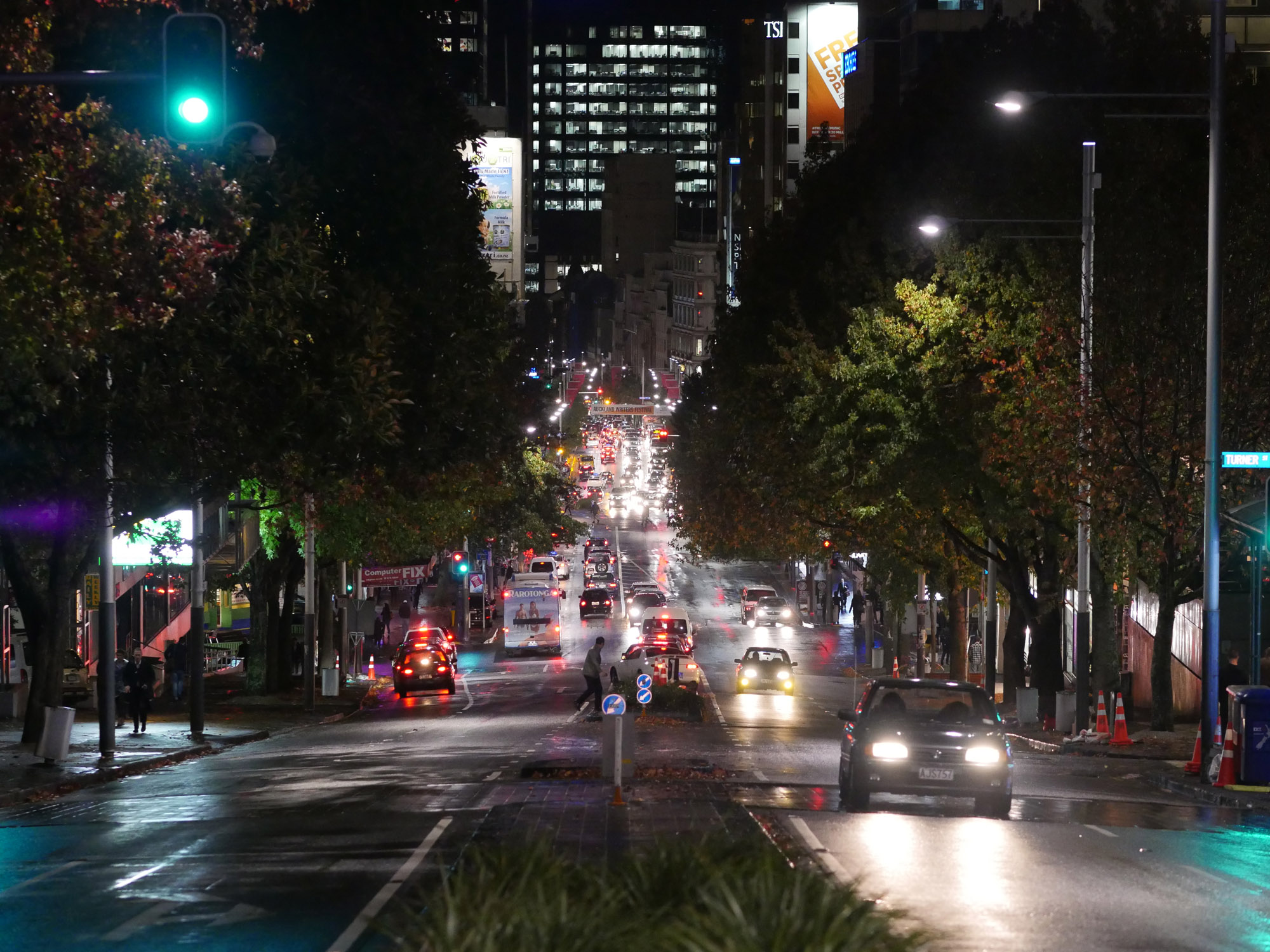 ” The autofocus is really really fast and accurate. “

Just like the GX7, GH4’s autofocus system is really good as well. The autofocus is really really fast and accurate. There are many AF settings and options for you to play with so there should be something that suit you the most. I especially like how the camera tells you which eye the AF is tracking when you turn on the face detection. Occasionally the camera couldn’t lock your target, this happens mostly when the target has very low contrast or is something that changes shape quickly (like water) but normally if you try again it will be able to lock successfully.  Since it’s a contrast detection system you won’t have the front/back focus problem that most DSLR systems have. 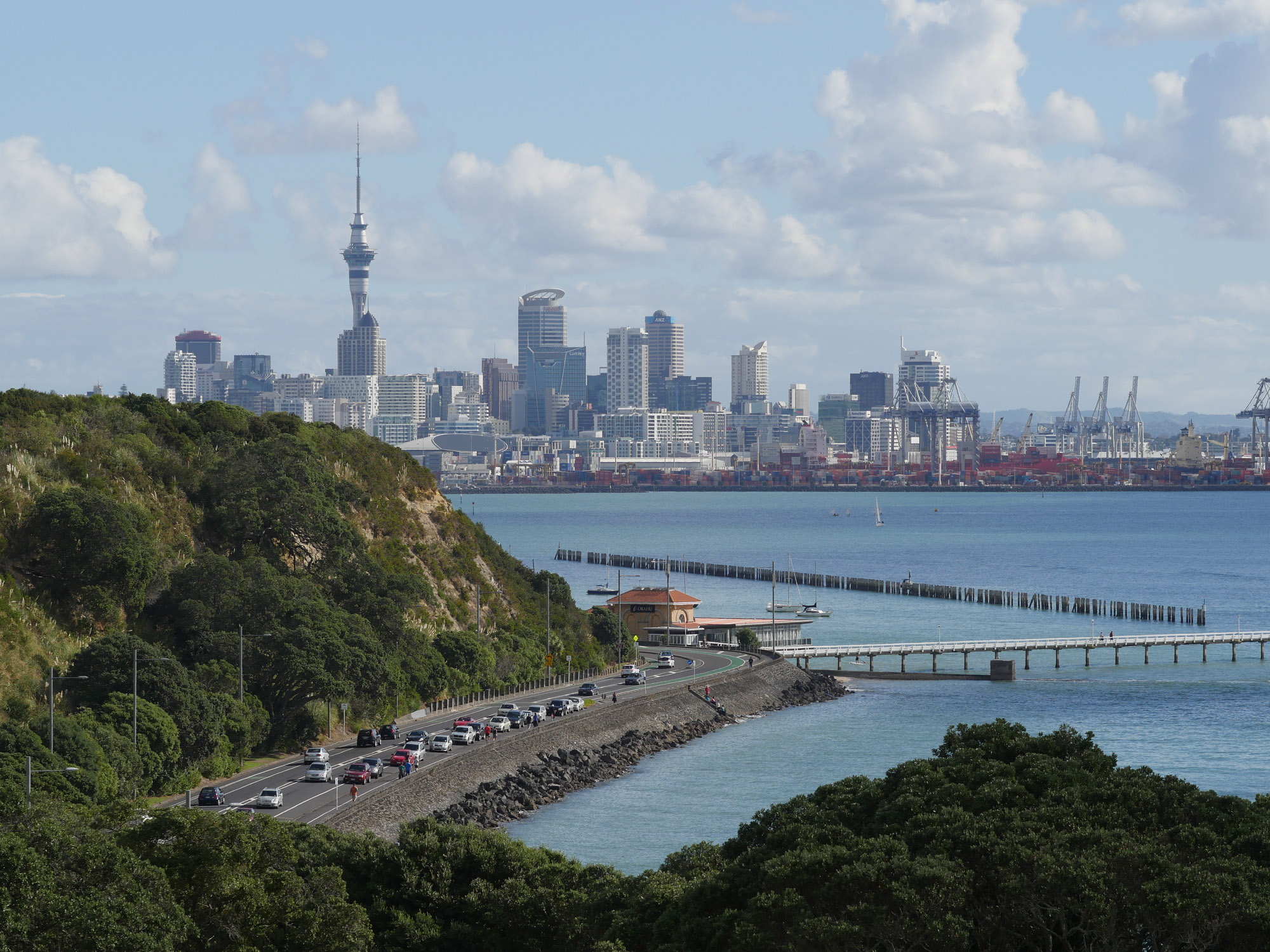 Low light autofocus performance is very good too. I tried taking some photos at pretty dark places and the camera have no problem locking my target. It just takes a bit longer than normal but it does work very well.. So you can probably tell I’m very happy with GH4’s autofocus system, well, at least when I am shooting static scenes. Unfortunately, using the AFC mode (continuous autofocus) to shoot moving objects is a different story. The tracking speed is a lot slower and does hunt quite a bit. Because of that, the GH4 probably is not the best camera choice for sports photographers even it can do 12fps burst rate. 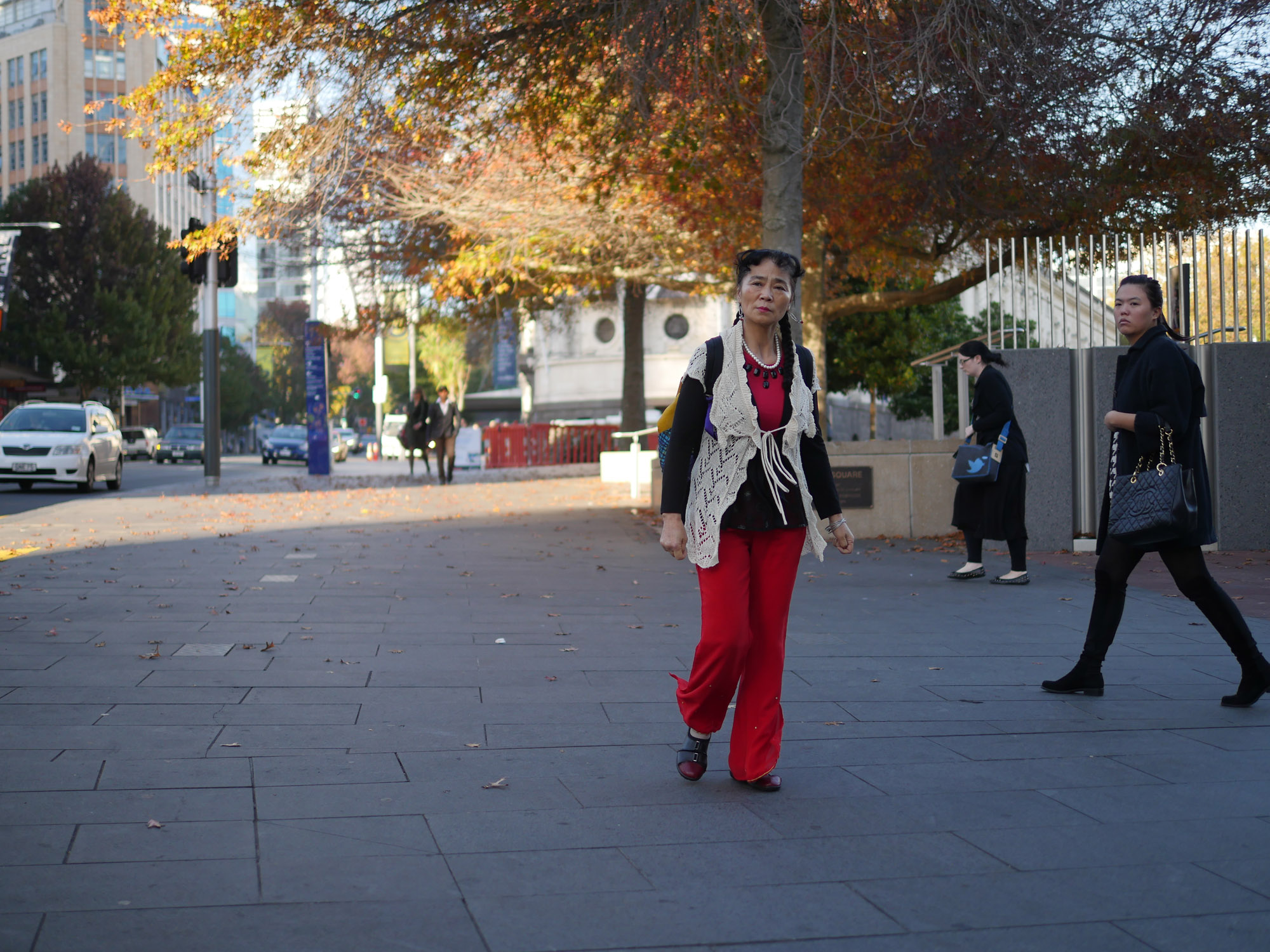 At the GX7 launch party last year, I asked the Panasonic representatives about in body image stabiliser (GX7 was the first Panasonic micro four thirds camera that has it). And I was told that from now on, more Panasonic micro four thirds cameras will have in body stabiliser. So I was a bit disappointed that gh4 is not one of them. I have quite a few micro four thirds lenses but none of them have optical stabiliser, so I have to bump up my ISO a lot as soon as the sun goes down the hill. The GH4’s sensor can handle high ISO pretty well but it’s always good if there is a image stabiliser to help me lower my ISO by a stop or two. 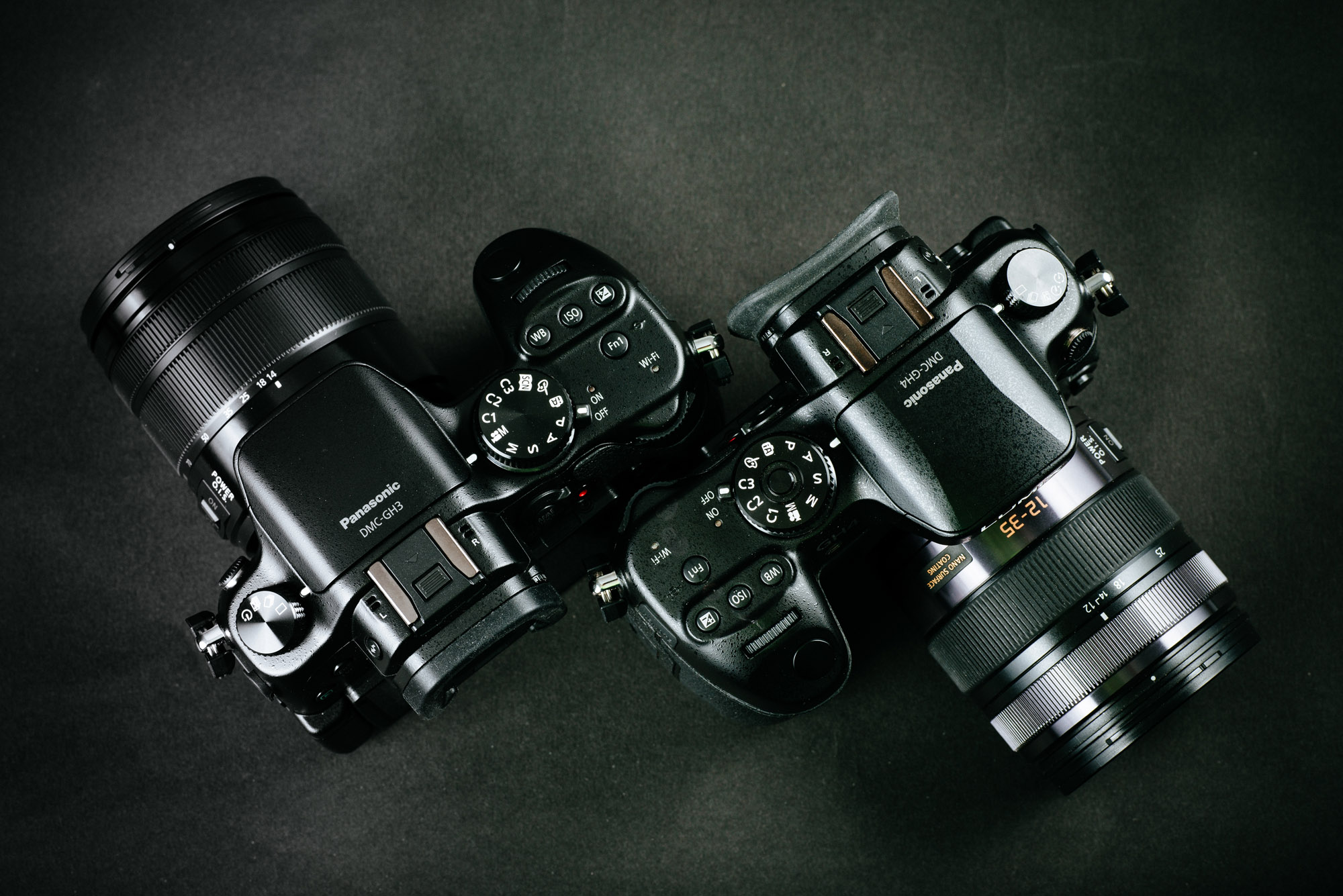 GH4 uses the same 1860mah BLF19E battery and battery grip as GH3. The battery life is pretty good. For most photo users, I imagine a single battery should be able to last a full day of shooting. Of course it is a different story if you are shooting videos. At the beginning I said this review will be mainly from a photographer’s point of view.  But most people who buys the GH4 will primarily use it for taking videos, so I will also have a look at some of the video improvements as well. 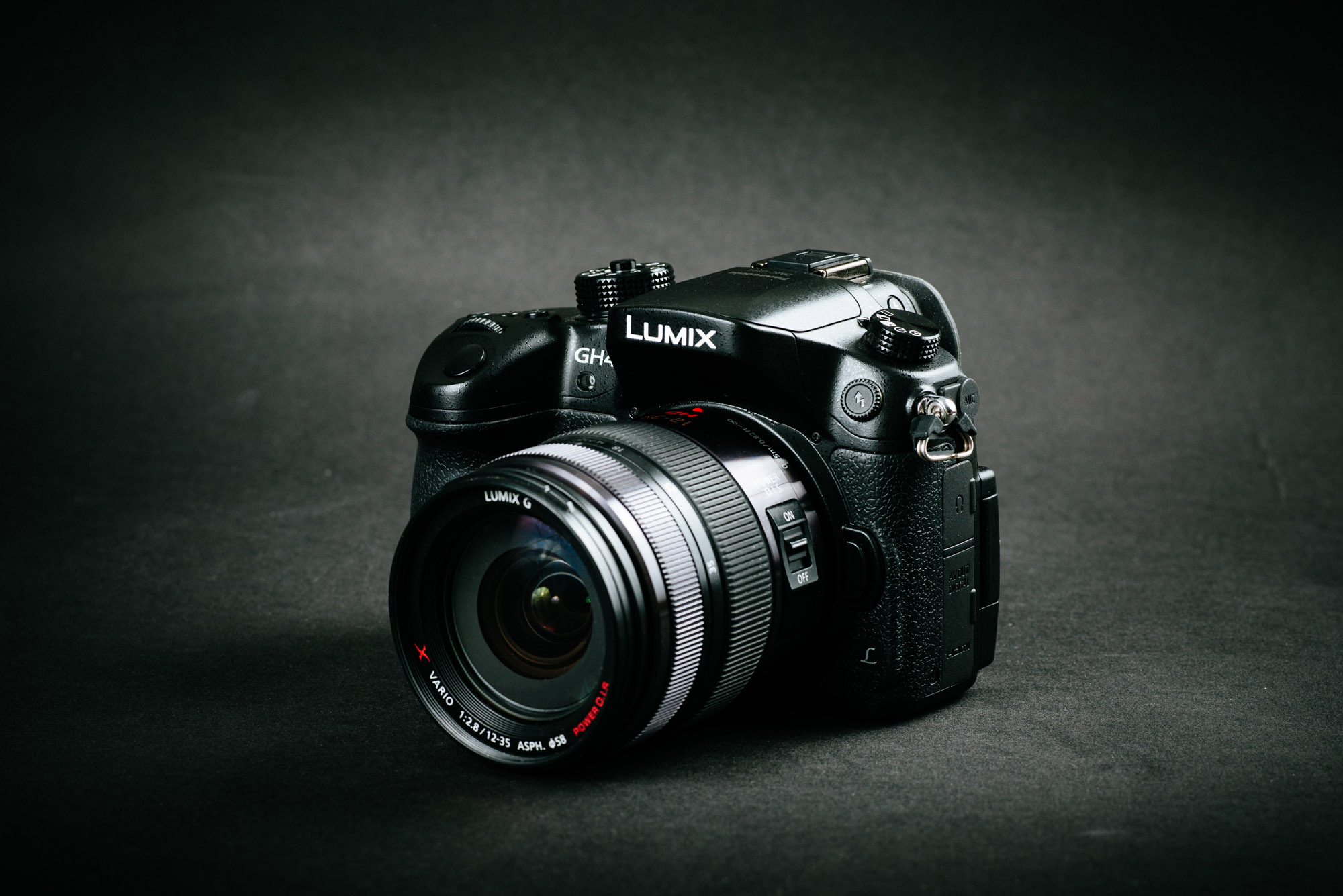 “Does the 4k recording really mean anything to us? My short answer is, YES! HELL YES!”

The key new feature of the GH4 is of course 4k recording. But 99% of us don’t have any 4K display at home, so does the 4k recording really mean anything to us? My short answer is, YES! HELL YES! One of the first thing I did with the GH4 was shooting video at 4k. I took some short video clips, at Cinema 4K and 1080p (all-intra) mode. And I played the videos on a Macbook Pro. My Macbook only has a 15” non-retina screen, not even full HD, but playing the two videos side by side there is already a very noticeable difference. The 1080p video looks pretty good by itself, afterall the GH cameras are famous for the video quality, but the 4k video completely smokes it.  The 4k video is just so sharp! Even some of the busiest scenes look amazingly sharp and detailed! And that was just playing the 4k video resized real time using VLC player. If you properly re-render your 4K files to 1080P then play it back on a big 1080p TV, you’ll be amazed how sharp your 1080p TV suddenly becomes! And since the 4k file size isn’t really any larger than the 1080p (the data rate isnt really higher at GH4’s best quality setting), so if you want best quality output, I do really recommend you just shoot at 4k, then you can resize them to super sharp 1080p.  Another benefit shooting at 4K is that you have more flexibility during post processing, with all those extra pixels, you can easily zoom in/crop/apply stabilsation and still maintain high video quality. 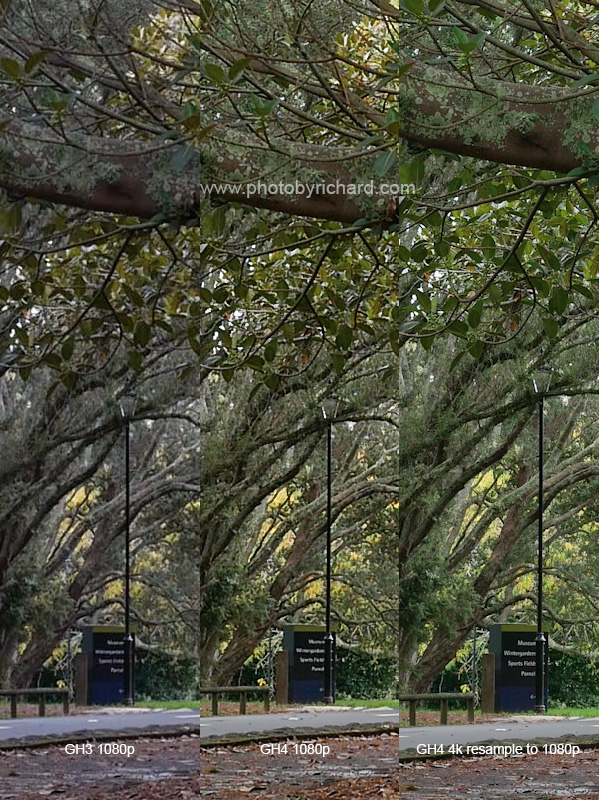 The GH4 can also do 1080p at 96fps, that’s 4 times the normal 24fps speed. This allows you to create some nice slow motion videos But 4k and 96fps are not the only changes in the video department, there are a lot other changes and improvements as well. For example, focus peaking and zebra (with user selectable colour) are now possible and the autofocus in video mode seems to perform better too. I was using a class 10 SD card during the review and I had no problem with recording videos at all the different settings I’ve tried including 4k. So while it’s always good to get a faster card, it’s not a must if you plan to record 4k videos. For the very serious videographers, Panasonic has also made a YAGHE base unit which gives you 4:2:2/10bit four SDI output and 2 XLR audio sockets. I didn’t have a chance to play with one so can’t comment on it. What if you want to save the trouble and shoot at full HD instead? I have compared the 1080p video from GH4 and GH3, and while I won’t say there is a huge difference between the two, the GH4 video is sharper overall and resolve a bit more fine details. It also handles high ISO slightly better than the GH3 (approx half stop improvement). But really just shoot at 4k then resample to 1080p if you buy a GH4!

As the 4th generation GH camera, the GH4 has evolved to a very mature camera for both video and photo shooters. The body and user controls are well designed. The videos (which we haven’t talk too much in this review) are fantastic and now with the option to record 4k video straight out to the internal SD card, it’ll definitely become videographer’s favourite camera. While the camera is quite often viewed as a “video” rather than “photo” camera, it is actually also a very decent photo camera with good autofocus system and image sensor to support it. What might be missing is the camera looks just a bit too much like the boring DSLRs and doesn’t have the more attractive body like the GX7. But if you are someone who mainly interested in capturing good quality videos and photos rather than how your camera looks, the GH4 is an excellent choice .

Richard is also a contributing writer for the D-Photo magazine. (www.dphoto.co.nz)